Ain't Nothing But the Blue

A Review and Analysis of Three Colors: Blue

Have I ever told you that Krzsztof Kieslowski was a master of filmmaking?  I wish more people would see his films so more would recognize what a craftsman he really was. I don't think anyone should begin with my favorite, The Double Life of Veronique.  Perhaps some of his television show, The Decalogue. Perhaps A Short Film About Love, a film release of one of the stories of the Decalogue.

For myself, I started with Three Colors: Blue, and I was only mildly impressed by it at first.  It was so slow and didn't seem to have much of a plot. I didn't realize that Keislowski had a different style of storytelling, one that is uniquely suited to film.  He weaves all the aspect of film: the music, the characterization, the plot, the visual elements even the filter he uses in his cinematography, all of it is a symphony of a theme.  And like most symphonies, the theme may not stick out the first time you experience it.  How do you know if you want to listen to it again?  Because it won't leave you mind.  It has become a part of you.  And this is what happened to me with Blue.  The film haunted me.

It is the story of a woman dealing with her grief at the loss of her husband and daughter in a car accident.  Her grief is deep, caverns deep, but she cannot share it with anyone, so she isolates herself, trying to forget that she had ever had that life. However, life intrudes.

If you are not a fan of slow films, you will not like this movie at first blush.  However, it is not a slow film.  There is a lot going on in every scene.  What is happening is quiet, but it is powerful.  Allow yourself to be captured by it.

Of course, the Three Colors come from the French flag and it is well known that they are associated with the  three word motto: Liberty, Equality, Fraternity.   Like Keislowski's TV series The Decalogue, each film deals less with a certain theme, but rather reflects the whole of the subject.  Is Blue about Fraternity?  Or Liberty?  Or some aspect of each?  It might be better understood that this film deals with the opposite of them all: Isolationism.

At the beginning of the film we know nothing about Julie or her family.  We see the accident, but we have no feelings about it because we know almost nothing about them.  We only learn about the family and their day to day life as Julie is trying to destroy it, which reminds me so much of Michael Heneke's The Seventh Continent.

The grieving wife and mother feels that she can only live her life isolated from all people.  She attempts to destroy everything of her old life, leaving only the blue glass lamp to remind her of what she gave up.  What exactly does the color blue represent?  Her family, her grief that she has tried to shut out, humanity, the pain of humanity?  Perhaps all of that.  Blue is everything she no longer wants in her life.

This doesn't mean that she doesn't wallow in that same grief.  Poignient scenes take place as she swims in the pool, drenched in blue light, the only place where she allows herself to grief, to weep.  But as soon as she is with others, she dries her whole self and is as stoic, as independent as ever.  She sees a man being beaten by a group of other men and she does nothing, even when he comes to her door and seeks asylum.  She pushes away all neighborly interest because she doesn't want to be involved.

But she can't keep everyone away. A street flute player catches her interest.  A talkative neighbor impresses herself upon her.  A man at the scene of the accident finds her.  And finally, an old flame seeks her out, attempting to pull her back to life and humanity. 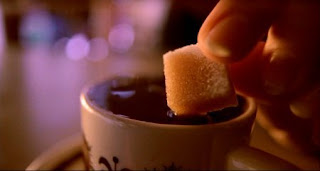 It is interesting to compare and contrast this film with the previous film Keislowski made: The Double Life of Veronique.  Grief is also present in that film, although the protagonist doesn't know who she is grieving for.  But two other themes are interesting connections: music and sex.

In The Double Life, music is a symbol of the spirit, that which draws one away from the earth (some disagree with my interpretation of this, and I'm okay with them being wrong).  In Blue, music is strictly fraternal.  It is a symphony with many players, many writers, a score being written for the unification of Europe.  Julie attempts to destroy it, because it is a part of everything she no longer wants to be a part of.  But it survives, because it cannot help but survive.  Life on earth is about fraternity, about connection, about association. No one can escape it forever.  The most stringent hermit, such as The Desert Fathers or a Trappist Monk in a vow of silence, none of them are completely isolated.  Rather, recognizing the need of hospitality, they welcome all who come their way.  Even so, Julie, although at first irritated by human interruption, eventually welcomes it.

Sex is also an interesting theme in both films.  In the Double Life, sex is that which keeps one bound to the flesh, attached and associated.  At first, Julie wants to use sex to show that she is just the same as any other woman, unworthy of notice, thus easy to leave alone.  But sex in Blue is clearly shown to be connection, association, intimacy with others.  Julie's neighbor says, "I can't spend a night alone" and "Everybody wants to do this"-- while Lucille was crudely talking about sex, in the end what was really meant was connection and intimacy.  Everyone wants what Julie has shut out of her life-- even Julie, although she doesn't know it.

In the end, I think that Three Colors: Blue is a magnificent symphony on how we all go through periods where we demand loneliness.  Humanity, in times of deep depression, is too much work, too many demands, too much stress.  And if we can get isolation, we might enjoy it for a time.  But humanity always beacons us back.  We are always woven together with others and we can't escape it forever.  One of the most touching parts of the film is the finale when we see the many people Julie has touched, even during her period of isolation  and the full musical piece that she has been avoiding plays in the background.

Almost at the beginning of the film, she awakens in the hospital after the accident and we see a close up of her eye.  It is empty, even hollow.  At the very end, we see her eye again, but the center of it is filled with the man with whom she has just made love, the man who dearly loves her in return.  That, in a nutshell, is the theme of the film.
Posted by Steve Kimes at 10:03 PM