Originally posted on the Filmspotting Forum


In the last couple days I watched a few movies that caused me to reflect on the relations between men and women in film.

The Chronicles of RiddickThis sequel to Pitch Black is easily more imaginative as the first.  You have a militarized fundamentalist group and one bad guy who is seen as the savior against them, although he has his own motivations.  The universe is more complex than one might expect, and the editing and special effects are quirky and fun (except when they are overblown).   The worst of the film was its characterization of women.  It is a male teen fantasy, more than anything.  The men are tough and fight to prove superiority.  The women are seductive and pursue the strongest men, but the strong men resist the woman crawling over them lasciviously.   I understand it's a fantasy, and a Van Diesel film, but why must we have films that perpetuate this caveman fantasy?  Again, it had a lot of positive points, but overall it left a bad taste in my mouth.

Caesar and Cleopatra (1945)This is a pretty shoddy adaptation of a fascinating George Bernard Shaw play.  Except for Claude Rains and (occasionally) Vivian Leigh, the acting was horrible.  The physical set up of many in between scenes were awful.  The script, however, shone.  It is about how Julius Caesar comes to Egypt and teaches Cleopatra to be a woman-- not in a sexual sense, for it is clear that Shaw thought Caesar to be too old for Cleopatra-- but instead taught her to be independent and regal.  The verbal play, of Caesar especially, is wonderful, and a joy to hear.  I love Shaw scripts.  Even so, it is clear that the play was written in 1898, and an attitude of "a woman needs a man to teach her wisdom" prevails all the way to the last scene.  A woman can be strong in this movie, but never wise.  That is something that men must teach them.  Foolishness.

In A Lonely PlaceI have seen a number of Bogie's films, and only a couple have really stood out to me-- The Big Sleep, Key Largo.  But this one tops them all.  What a charming, lighthearted film with a heart of sorrow and oppression.  Dixon is a screenwriter who has had trouble keeping relationships, especially with women, due to his reliance on violence.  If someone says a bad word about himself or another, he flairs up and begins to get physical.  Overall, he's a good guy-- charming, funny, smart.  One day, he is suspected of murder, and through that gets involved in a relationship with his funny and smart neighbor, Laurel.  Rarely have I seen a better screenplay.  The relationships are perfect: believable and fascinating.  It is all so wonderful until it goes gradually wrong.Dixon actually has the same immature attitude toward men and women that is displayed in the Chronicles of Riddick: Men fight to prove their superiority, women desire men and should be dominated. ** Spoiler Paragraph** (and the conclusion of the matter) However, by the end of In a Lonely Place it is clear that reality doesn't work this way.  You can't have good relationships with people in modern society as if you were a caveman.  In this way, not only is In A Lonely Place a superior work of art, but it is also morally powerful.  It shows the end of living in a teenage fantasy: frustrated, angry loneliness.  So sad, but so true.  There are many people like Dixon who I wish could learn this lesson before it is too late.
Posted by Steve Kimes at 1:03 PM 4 comments: 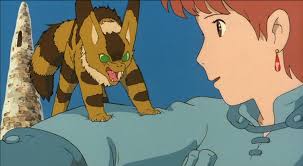 As a Miyazaki fan, it is my sworn duty to occasionally post a review of a film by the greatest animated film maker ever.  No, I do not consider that hyperbole.  Today, it is on Nausicaa of the Valley of the Wind.  Deal with it.

Some important facts to know about Nausicaa:

-She is a princess.  Who flies. But she doesn't sing which is why she isn't a Disney princess.

-She lives in a poisoned world.  Poisoned by us modern warmongers.  Yeah, she lives in the future.

-She is a badass.  She's not all sweetness and light. She can carry a machine gun twice her size with a wounded leg.  When she really gets ticked off, she can kill a dozen men twice her size in a heartbeat. I guess that's another reason she's not a Disney princess.

-She is an environmental scientist. She not only creates a garden pure from the deadly radiation that makes nature become poisonous, she also figures out how nature was cleansing poison out of the earth on its own.

-She is a nature goddess.  She can communicate with animals and they do what she says.  Maybe she's really Dr. Doolittle in disguise.

-She does NOT go around naked without any pants.  Her pants are flesh colored.  That confuses and embarrasses a lot of men.

Nausicaa takes place a thousand years after human war has poisoned the soil of earth to such a degree that poisoned jungles grew up, insects became gargantuan and huge protectors of nature were created-- Ohms. There are a number of human kingdoms, but the film deals with only three, Tolmekia-- a war-like kingdom that wants to rule the others; Pejite, the sworn enemies of Tolmekia; and the Valley of the Wind, a struggling utopia that gets caught up in the other kingdom's war.

Nausicaa herself is Miyazaki's saint-- the ultimate peacemaker. She is frankly an ideal Buddhist saint, who communes with all creatures, and seeks to make peace with all. She is especially focused on creating harmony between humanity and nature, trying to heal the 1000 year old rift. Throughout that thousand years, the poisoned jungles and humanity have been warring with each other, each attempting to overthrow the other's rule. Only Nausicaa realizes that humanity would perish without the jungle and that the jungle can flourish under humanity's enlightened guidance. Nausicaa is somehow able to understand the true nature of whatever she is facing. Instead of reacting to a threat, she responds to the fear behind the threat. Instead of seeing the death of the toxic jungle, she sees the beauty of it. She works with the nature of whatever is before her in order to create harmony with all creatures.

On the surface, this film seems weaker than other Miyazaki. Most Miyazaki are amazing in the detail of the world that was created for the film, and Nausicaa is no different in that. But the dialog is less rich and entertaining, the colors seem washed, and the style of animation is not as fluid as other Miyazaki films. Part of this, though not all, is due, I think because Miyazaki is trying to communicate the bleakness of the world in disharmony with nature. War-- both human and natural-- has taken its toll, draining life from everything. At the end of the film, the colors suddenly are brighter and everything changes.

Despite it's weaknesses (including a truly lame 80s score), this film is one of my favorites of all time. Despite it's bleakness, it is possibly the most joyful and optimistic of Miyazaki's films, and it plots out the general outline of hope for the future. Other Miyazaki films may communicate that war is bad and that bad guys aren't really all that bad, but this film actually lays out what would need to be done to end war, to change people's hearts. It isn't childish in any way, nor simplistic, if perhaps naive. It communicates that self sacrifice, listening to the another's heart, boldness for another's good and some basic reasoning can create a path out of the bleak world.

Perhaps I like this film because it is very much a religious philosophy I agree with. Perhaps it is because Nausicaa is such a strong character that to me she is the perfect moral hero. But with each time I watch it, the higher my estimation of it is. 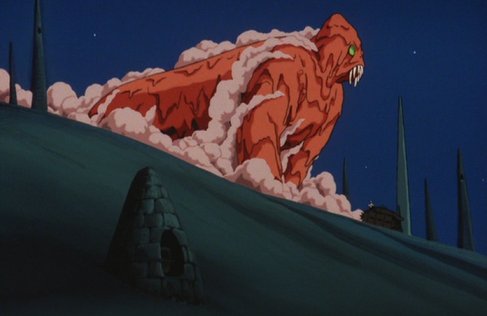 The final important fact about Nausicaa is:


I may be secretly in love with her.  You can go ahead and tell my wife.  She already knows. 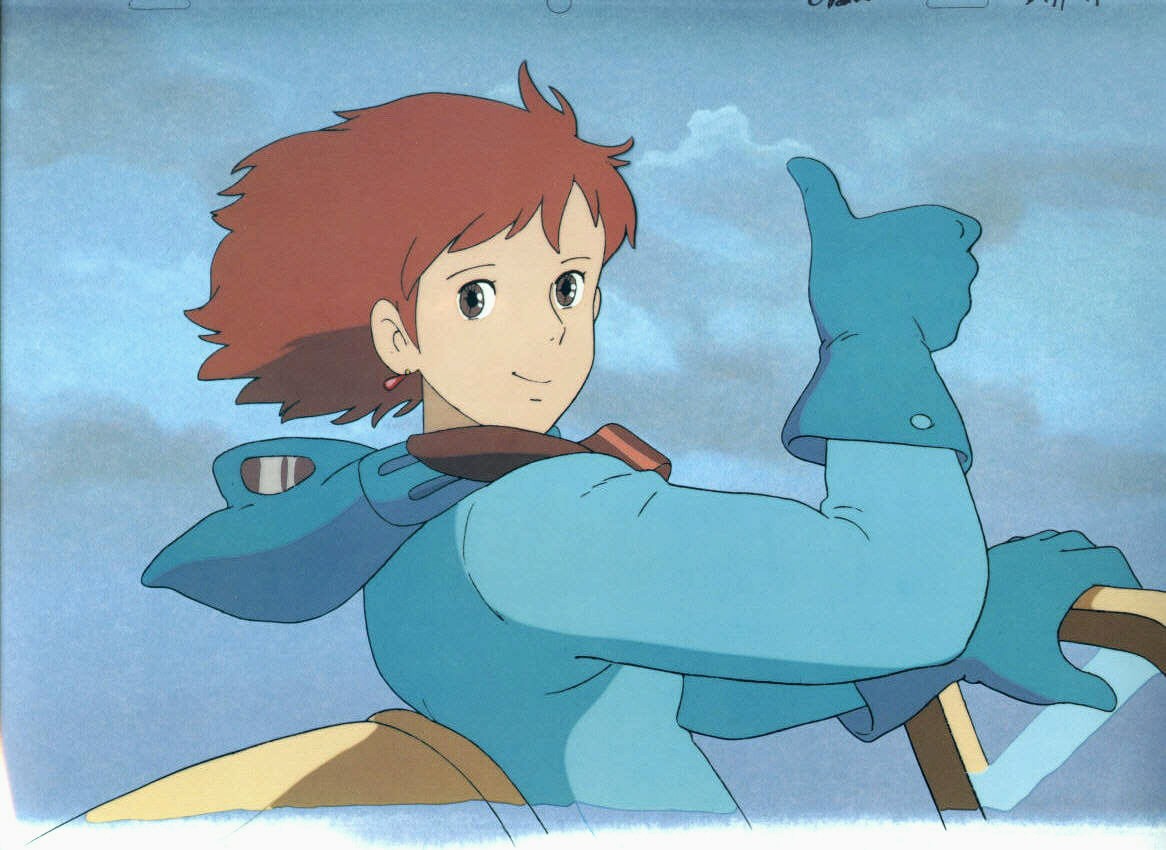