The Human Jesus on Film

From the early 300s to today, there have been discussions (aka arguments) about Jesus' nature.  Was he a god or a blood-filled flesh bag?  The orthodox answer is that Jesus is fully human and fully divine.  He was just as human as any of us, but also completely the Son of God.  But how do you show that in a movie?  The tendancy of film is to lean one way or the other-- to be a god-like person or to be more human with supernatural qualities.  Below are some films of that second category:

The Passion of the Christ—This Jesus doesn’t have much to do except suffer.  He has a few scenes, notably the “He who has not sinned cast the first stone” scene, where he can actually be a normal human being, but these are short, and offer few insights of Jesus as a person.   The movie is not about Jesus, but about The Christ—the symbolic sacrificial lamb.  The Christ isn’t supposed to be someone we identify with, but he is deeply human, in that he suffers and struggles and bleeds.  And bleeds.  In a sense, this is the perfect orthodox Jesus.  A Jesus who doesn’t teach anything specifically, but who dies for humanity and allows his followers to fill in the gaps.  No one has to listen to this Jesus, or obey him, nor does he say anything uncomfortable.  All we have to do is watch him die.  And while observing that is, at the very least, a difficult task, it is better than a Jesus that meddles in our lives, right?  I know that the film is only about one aspect of Jesus’ life, but I really need a Jesus that does something, not just one that winces. Jesus-2/5 Film-3/5

The Last Temptation of Christ—The most human of the human Jesus’.  Jesus struggles with the common desires of every man, he gets married and has kids.  We see that Jesus wasn’t interested at first in God acts, but had to be led and prodded every step of the way.   In this way, this Jesus is the one that is most identifiable, the one we can best connect with, of all films.  I only have one personal problem with it: Willem Dafoe.  He’s a great actor and he does a wonderful job.  But he also played a rather iconic role in the much more recent Lars Von Trier film Antichrist, which I watched a couple months before my rewatch of Last Temptation.  So I couldn’t see Jesus at all, only Dafoe.  I’ll watch it again later and see if I can distance myself from his other roles. Jesus- 4/5  Film-4/5

Jesus of Montreal—I like the way that Daniel isn’t Jesus from the very first scene.  Rather, he is a struggling actor with a girlfriend trying to make ends meet and to have integrity as an actor and director.  But as the movie progresses he becomes more and more like Jesus, until the role is completely embodied.  This is probably the best portrayal of the love of Jesus and a great human version.  Jesus-4/5 Film-3.5/5 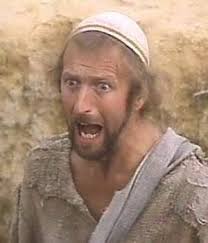 Life of Brian—First, I want to point out that Brian isn’t Jesus.  He doesn’t intend to be the Messiah, and in one scene he is trying to hear Jesus speak the Sermon on the Mount.   But on the other hand, Brian IS a kind of Jesus.  The pathetic Jesus who stumbles upon his Messiahship unknowingly.  Brian is a terrible Jesus.  But Life of Brian is a wonderful poking at religious thought. Jesus- 1/5  Film- 4/5

Ordet—Before you read the second part of this paragraph, I want to say two things.  First of all, this is my favorite portrayal of Jesus ever.  Secondly, if you haven’t seen it you MUST NOT read any more.  Major spoilers, here.  Order the film from Netflix, watch it, and then finish this paragraph…

Okay, have you watched it?  Wow, huh?  My favorite part of this film is that Johannes is seen as clearly mad throughout the film.  Interestingly enough, this is how Jesus was seen in his day by contemporary scholars and by his own family.  After all, one who makes such exaggerated claims as Jesus MUST be mad, right?  The only thing that separates a madman from a saint is that the acts and words of the saint actually come to pass.  I can think of no film that better portrays the view of Jesus family during his ministry and the aftermath.  I was as stunned and pleased and overwhelmed at the end of this otherwise dry film as any of the characters.  Glorious, just glorious.  Jesus-5/5 Film- 5/5

If you cheated and read this without watching Ordet, go and watch it anyway.  It is an excellent experience and the best portrayal of Jesus I have ever seen.

The next section, I give some recommendations to the next film portrayal of Jesus.
Posted by Steve Kimes at 8:20 PM

Email ThisBlogThis!Share to TwitterShare to FacebookShare to Pinterest
Labels: Jesus in Film, Jesus of Montreal, Life of Brian, Monty Python, Ordet, The Last Temptation of Christ, The Passion of the Christ, Willem Dafoe