A Word From Our Sponsor: The Interrupters

I knew this was not going to be a normal filmviewing experience.

It’s difficult when you watch a film that relates to your own expertise or your own occupation.  At best, this leads to discomfort.  Movies are made by moviemakers, so the only details they get precisely right is when the subject is movies.  Any other occupation or subject, they can do the research and get it partly right, but not exactly.  Soldiers generally are uncomfortable with the most accurate war movies, movies about airline disasters get many details wrong and films about a historic period will often cause historians to cringe.  That’s all well and good, we know that movies can’t be perfect, unless it’s YOUR area of expertise.   Then the film is someone on the range from okay to horrible.

The Interrupters is a documentary about a bold group of lay people, called Ceasefire,  stepping in to stop the huge number of deaths among young people in Chicago.  It is a difficult task, and they get paid very little, if anything for their important, dangerous work.   They intervene in violent situations, connect with families of victims, assist the violent to be in more stable situations, and create forums to discuss issues of violence and peace.  It was directed by Steve James, who also directed the acclaimed documentary, Hoop Dreams. 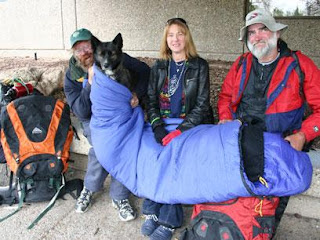 You may ask how the subject of this film relates to any expertise on my part. For the last 17 years I have been involved in learning an outcast, often violent group (the homeless in Portland), being a changing presence with them and creating community.    Some call it missionary work, some call it peacemaking, some call it community work, some call it mission work.   While I am working on a religious basis, and working amidst a group that isn’t as deadly as the one Ceasefire works with,  the work is fundamentally the same.  Creating peace in the midst of violence.  Working toward changed hearts, because that is the basis of changed action.  Intervening in crisis situations.   I have called the emergency line a number of times because of bodies I have discovered.  I have stood in the middle of knife fights.  I have had the police scream at my face because I was on “the wrong” side.  I have built a network of community centers for those who have no where to go.

Enough about me.  That’s enough to give you my sense of surprise when I watched this film:  It was perfect, absolutely, spot on, perfect.

Creating peace is a different animal than keeping the peace.  It is the police’s job to keep the peace, to catch criminals and take them out of the peaceful situation.  But what if the entire community is broken?  What if there is a violent, chaotic foundation at the heart of a community?   Then peace keeping isn’t enough.  As many “bad guys” as you haul away, there will be many more to replace them.  What the Interrupters show is how a community can re-create their space into a community of peace.

The basic principles are right there in the film:
-Find those who are committed to peace in the community, for whatever reasons
-Train them in non-violent intervention and in the reasoning of peace, focusing only on violence, not other criminal activitiy
-Have them make relationships within the community, especially those at high risk of violence (youth, families of victims)
-Speak words of reason to people when they are likely to be violent, and before then
-Discuss peacemaking principles with those who are young enough to instill them in their lives

All combined with a single purpose: to stop kids getting killed.

I was at various stages of weeping throughout the film.  Sometimes I wept for joy, sometimes for sorrow, sometimes just because I agreed so much with what they were doing.   This is the true work of God—the work of conversion, the work of creating a community of peace from a community of violence.   If you want to see some of the most important work being done in the world, I cannot more highly recommend this film.

If you'd like to watch The Interrupters, uncut, go to PBS's Frontline site

If you'd like to know more about my work with Anawim, check out our website
or Anawim's blog
Posted by Steve Kimes at 4:20 PM