Two of the greatest dancers in movie history, both of them experts at the "triple threat": singing, dancing and acting-- Gene Kelly and Fred Astaire go head to head as I watch them each at the height of their abilities, the early 50s.

An American In Paris 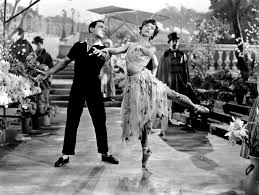 Some brilliant sets, especially when ballet is thrown into the mix. Gene Kelly is at his dancing fool best, and I especially loved his banter with Oscar Levant. But if nothing else, this film must be watched for the Gershwin. Some of the best songs in any musical.

Still, I was disappointed by the ending, which seemed thrown on and unreasonable, given all the set up of characters. And what happened to Nina Fonch? I think the film needed another five minutes or so.

I think my favorite part of the film is the ballet sequence introducing Lesie Caron.  Although she doesn't have much of a character in the film, this sequence allows her to dance out her boyfriend's ideal woman.  Each sequence is unique and expressive.  My greatest disappointment (besides the ending) is the long American in Paris ballet.  Although the music is exquisite and the sets wonderful, I felt that Kelly didn't have that much to do.  It was kind of dull. 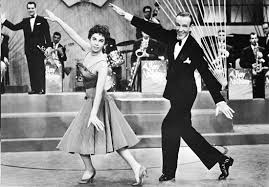 Of all the MGM musicals I have seen, I appreciate this 20th Century Fox one the best.

The story is simple, filled with the obvious complications that a rom com would have with a May-December romance. But as with all the older musicals, it is not the plot that is significant, but what surrounds it. Not only is Astaire my favorite leading man of this genre-- with his smooth dancing style and his decided charm-- but Leslie Caron is a wonderful actress pulling in her ballet to give a unique style.

But the two together have a balance that can be seen in Astaire's dancing with Ginger Rogers, with both displaying their individuality. I love Caron's performance as a headstrong young woman who knows what she want, but underneath isn't confident that she will receive it.

Yes, we know where this movie is going, just like American in Paris, but unlike the Gene Kelly film that this one borrows from heavily, Daddy Long Legs takes it's time, and gives a decent, believable ending. It follows through on the set up in a perfectly timed fashion that most of these musicals do not, rushing to end the film without allowing the characters a believable end.

I loved all the songs, especially Dream and Somethings Gotta Give. And they are fit perfectly into the story. Thank you, Mr. Astaire, for finishing this film, despite the difficult death of your wife. You can see the sadness in your eyes, but it plays perfectly with the doubts of your characters, and deepens his soul.

The Standoff
Watch the brilliant short where the two masters dance together for the only time, in the film Zigfield Folllies.

Especially in watching these two films back-to-back and having the same leading lady in both, I am clear about my preference of Astaire over Kelly.

Why? I ask myself.

Both are excellent dancers, and about the same ability in acting.  Kelly is probably the better singer.  Certainly they have different styles of dancing, with Kelly being more athletic and energetic, while Astaire is more suave and probably more versatile.

I think it has more to do with the personas each of them present.  The form of acting school they represent is to find a charismatic character and stick with that persona, no matter what occupation or class change you go through.  But since all of these movies are essentially romantic comedies with music and dancing, I want my leading man to be attractive-- not physically, but in character.

Kelly's character has a certain naivete, but essentially he is a forceful person who thinks that his blind enthusiasm will get him what he wants (the girl).  In the end, that assumption puts me off.  I know that some girls go for that kind of guy, but he isn't attractive to me.  Or, more to the point, I wouldn't want my daughter marrying this kind of guy.  (Which will probably be my fate.) Astaire is not only suave on the dance floor, he is also humble in persona.  He is more forward in his earlier films, but in his later films-- Daddy Long Legs and Funny Face, for example, he is thoughtful and concerned about his girl's place in society.  He is bold, but also kind.  Perhaps this has to do with his age (it certainly does in Daddy Long Legs),  but I find watching his antics and misunderstandings to simply be more comfortable, and thus more entertaining, to watch.

Well, and I find his dancing to simply be more expressive, and better suited to a partner.  Kelly is a brilliant dancer, but usually on his own.  Astaire is the perfect partner for a rom com musical, because he makes the woman look better by him dancing with her.  Now that's romantic.
Posted by Steve Kimes at 6:27 PM