Okay, so you’re dead. Sorry, but you knew it had to happen eventually. For some, it happens young, but most of us when we are older and worn. Rather than a bright light, you end up in a low budget college with a dorm and a staff. Their purpose is singular: to help you choose the one memory that you will spend eternity with. It’s a tough choice because eternity is a long time and out of all the beats in your life you only get to choose one.

Think about it for a second. Your whole life, one memory is all you will get. Your whole life will be boiled down to this one moment. Nothing else will count. Will you chose a happy memory? A poignant one that perhaps represents your whole life? A lesson you learned? A person you spent your life with… or a person you wanted to spend your life with. It’s a tough decision. But don’t worry, you’ve got a few days to figure it out. 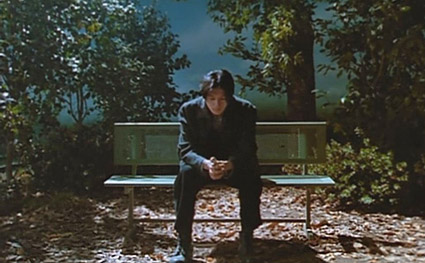 I love the conceptual seed of the film, but also the rough, almost gritty feel of it, just the opposite of most presentations of the afterlife. There’s no mystic light, no robes, no courtroom feel. Just a group of social workers, there to bring you to your inevitable conclusions, who, of course, have their own issues. The interviews are also quite realistic, documentary-like, and rightly so, as some of the people are not actors, but just people who they are asking this singular question to.

So you might ask, what is my choice? After spending two plus hours thinking on the question and asking my family about it, I think that a scene that is interpreted various ways would be best for me. If I’m going to spend eternity watching a short about my life, I’d like it to be provocative, with different answers. Because I will be many people, thinking different things throughout eternity and I’d rather have a scene that could be interpreted various ways. Or I could just have a recording of Jesus Christ Superstar. Or maybe a poem by John Donne. Something like that.
Posted by Steve Kimes at 9:30 PM