Reinterpretation of Life: Kubo and the Two Strings

I want to make my case why Kubo is not only the best animated movie of the year, but among a few best films of the year.  I haven't read any reviews that really get deep into the film beyond it's beauty, so I thought I'd write something that helps folks see how I saw it.

If you never saw this film on the big screen, then I don’t think you could really appreciate the line, “If you must blink, do it now.”  On the one hand, it is a line of a marketplace storyteller, the hyperbole of the campaigner, the exaggeration of the ad man.  But in the context of this most artful film of an artful studio, it is simple reality, without any stretching of the truth.  The film keeps the promise of this line with stunning sets and eye-popping animation.  I honestly didn’t want to blink.  And in those sets, the new direction of clamation, the master-stroke of this studio is presented and I didn’t want to close my eyes for a moment.  Right after I saw it, I wanted to see it again.

Part of this is not just due to the art.  Frankly, this story resonates within me.  It is the hero’s journey, which I love in its many forms from The Odyssey to Lord of the Rings to Star Wars to Moana.  But here, the hero’s journey is joined with the boy’s adventure, filled with dangers and adventures.  It is 1001 Arabian Nights and The Thief of Baghdad and The Boy’s King Arthur, as well as The Neverending Story.  It is monsters and enemies and magic and secrets and mythology, all revealed in a powerful mix.  If this were released in 1977, I would have gone to the theatre twelve times to see this instead of Star Wars, for the fine mix of hero’s journey and magical adventure resonates perfectly to my boy’s heart.

Add in the wonderful music, simple and emotionally resonant, as well as each relationship being a form of love and charity and I am sold.  All I need is a great theme and this film will be one of the great films of all time.

The theme, however, is considered one of the weaknesses of the film.  Everyone recognizes that it is about the power of stories, but most folks feel that it isn’t really saying anything new or interesting.  I would like to challenge that assumption.   But to do so requires an overview of the film.  And spoilers.

The story is about Kubo, a young storyteller who cares for his addled mother in a cave, and who is loved by a nearby town.  Disaster strikes when his aunts, daughters of the Moon, find him and cruelly bind him to take him to the Moon to take his eye out.  He escapes, to find his mother gone and he is led by a magical monkey, an origami representation of his father and a beetle-man to find his dead father’s armor.

The quest for the armor is a McGuffin, but it gives us an opportunity to see relationships grow, to see his parents fall in love again, to see Kubo learn his values on his own, not just because his mother taught them to him.

But what we see by the end of the film is the figure who is always there, always making events occur, always watching, but never speaking until the film is ready to end: Kubo’s grandfather, the Moon.  We see that the film was always about the relationship between Kubo and his grandfather, and the challenge between the values each stands for.   The grandfather is a gentle man who just wants the respect he is due, and sees the world through eyes of logic.  Kubo is the product of that heritage, but also the heritage of his father who values relationship above logic and honor.  And of his mother, who chose love over the ways of his grandfather.  So far, so good.  Nothing really unique here.

The climax is what changes the perspective.  The grandfather, the Moon, is is transformed into humanity because of his desire to be connected to his grandson.  He wanted his grandson to be like him, to show him the respect his daughter and son in law didn’t display.  To reject his humanity and take on eternity.  But Kubo couldn’t refuse his heritage, and so brought his grandfather into his family.  The key is that the moon agreed to take part in Kubo’s story—the story of the battle between the evil but strong moon the  noble but weak boy. The moon took on Kubo’s story, that of him fighting a monster.  The moon chose to be a monster, thinking he could defeat Kubo with his own story.  But Kubo changed his story in the middle, so that it was no longer about a battle against a monster, but the story of a family, joined by experiences and uniting in their differences.  When the stark, cold moon took on a side in Kubo’s story, he could be transformed into a human, blended from both eternity and temporal, heavenly and earth.

What was an epic battle between good and evil became a story of thesis (the moon), antithesis (the parents) and synthesis (Kubo).  Kubo then uses the story to transform the moon into his own image—a kind man.  Kubo re-interprets his story and so re-interprets his grandfather who agreed to take part in Kubo’s story.

What is a child supposed to get out of this? That his parents are not what they seem; everyone has their own point of view; family is the joining of contradictions; our life is the continuing story of our parent’s lives.  But I think what we can get out of it is more important.  How do we interpret our lives?  Rather than asking whether the interpretation is the closest one to the “truth”, rather we should ask if the interpretation is the one that benefits everyone.  Is a good v. evil story really what makes unity, what makes joy for all?  Or is there another way of creating a story of our lives that draws all people in? 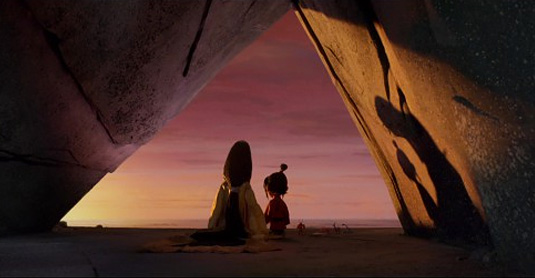