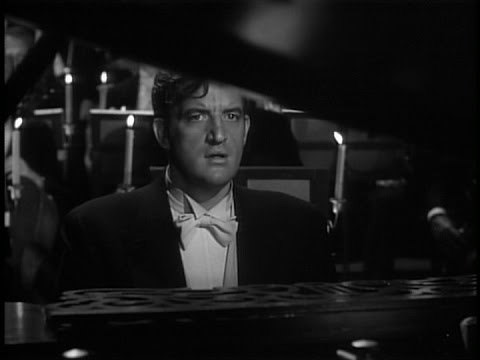 We can tell by the opening setting that this is a noir.  Dark, shadowy, haunting... but it takes place in London, 1899.  Odd setting for a noir.  Then we see a old Jewish man murdered before our eyes and a fire set.  Oh yes.  It's noir, all right.

Then we follow our murderer to find out that he is a composer, on the cusp of success, loved by his fellow musicians and admired by a beautiful woman.  And he has fits of amnesia, and he is worried, deeply worried about what he does during these fits.  What does one do in this situation, go visit George Saunders.  That's what I would do. What we end up with is a curious mix of Jekyll/Hyde, Hitchcock and Phantom of the Opera.  While not especially clever or mysterious, it is emotionally evocative and compelling.

There are two things I am still considering about this film.  First: will any American studio ever be able to present a believable Britain? The accents are a mess, they are all explaining Guy Fawkes Day to each other, and it all sounds more like Oliver! than Kes.   I guess Fox wanted to repeat their success of the previous year, The Lodger, so imprinted that film on this script. The second is a connection between the response to the murderer and modern misogynists (mild spoilers).  The murder is acknowledged as dangerous and mentally unstable.  He has killed and it has been proven that he is completely unstable. This is related to his psycho-sexual needs being unmet.  The response of the police is, "You are dangerous, but we know it's not your fault. We'll take it easy on you."  Is this because they appreciate his standing as a white male, as a person of means who can spend his time composing music that hasn't been heard?  If he were poor or a woman, he would hang immediately.  It's all very believable.  Perhaps a bit too believable.

But the film is great.  Fantastic music, especially in the concerto scene, by Bernard Hermann, who also did the music for Citizen Kane, and the cinematography was beautiful, in classic noir style.  Highly recommended.
Posted by Steve Kimes at 8:07 PM