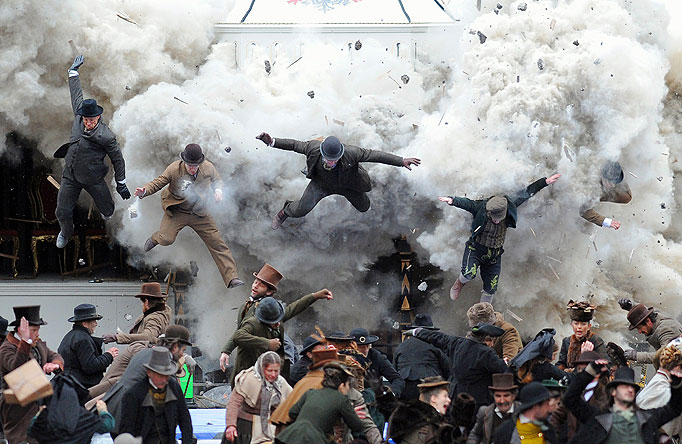 I probably went in expecting too much. It starred Robert Downey Jr. and Jude Law, and it was about Sherlock Holmes. I figured the script would be smart and funny and we'd see some antics, but we'd be heading to a generally good time.

What I got was a stylized action film with House, MD and his sidekick Robert Wilson.

Sherlock Holmes isn't bookish or full of disguises in this film, he is clever, but far more smart about anatomy and how to hit his opponent than he is in solving a case. Dr. Watson is far less proper than his short story counterpart, and more likely to threaten than to heal. And their relationship is almost identical with House and his best friend in the TV show, with Sherlock being manipulative and Watson being sarcastic.

It's a good show. And Guy Ritchie is certainly in control here. The visuals are fantastic, even the final credit sequence is stunning. But I was so disappointed in what I had hoped to watch that the interesting looks couldn't sway me. Perhaps it was the obvious CGI that did me in?

If you are looking for a nineteenth century action/mystery film, with cool visuals this is for you. But if you were hoping for a funny, smart script and a new take on an old set of characters, don't bother. 3/5
Posted by Steve Kimes at 10:40 PM