Yes, this film is the best movie about a family ever made. Not only is the acting of the highest quality, every scene is both dramatic and real. No matter how many times I watch this film, I laugh, I cry. It moves me, Bob.

Johnny and Sherry have moved their two girls to New York from Ireland in order to make a better life for themselves. They do this illegally, and without any support from family or friends. They end up moving into a run down building, filled with addicts and the mentally ill. Occassionally they are disturbed by the screaming of a neighbor downstairs. But they are determined to work hard, to love and to survive. To survive as joyfully as possible, which isn't easy. The struggles they go through the first couple years aren't unusual, but powerful as they settle into their new country.

In the family, every character is distinct and well developed, but the family as a unit is also perfectly realized. And then the inclusion of Djimon Hounsou to shake the family up is simply wonderful. This is the only movie I can think of that both times I watched it I thought, "This is a perfect film." There are other films that hit all the emotional moments and have wonderful characters, but few that I appreciate so much being a part of their lives, if only for a short time.

Technical-- 5/5-- Well crafted film. The cinematography isn't stunning, but it is interesting. The acting is top-notch and the story is perfectly told.
Interest-- 4/5-- I only lost interest the first time I watched the first scenes. But they soon captured me and I can't take my eyes from the screen. 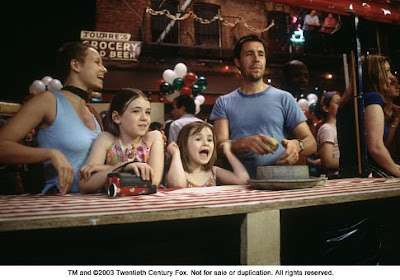 Tension--4/5-- The scene at the carnival is just amazing. The stakes seem so small at first. And this isn't a tragedy, we know where it should go. But no matter how The dual sickbed scenes. Totally intense.
Emotional--5/5-- I cried both times I saw this film. The important thing is that the joy, the anger, the sorrow isn't just cheap tricks-- the emotion is at the core of the film, making it a personal experience.
Characters-- 5/5-- This is the real strength of the film. I have never seen a whole family, including children, presented with such completeness. I know these people. I want to know them better.
Theme--3/5-- Thematically the film isn't very strong, but the experiences of the parents resonate. Allowing oneself to feel is a major theme, as is the stress of simply trying to survive.

Ethics--3/5-- The occasional interesting ethical situation. How should we deal with addicts who ask us for money? How do we best raise our children in a frightening environment?
Personal--4/5-- I can relate to the raising of my two girls. The joy of the family reminds me of the best times with my family. But more than that, I understanding putting my family into situations that are both familiar and pretty scary. And perhaps this is why it connects with me so strongly. We've never been immigrants, we've never spent more than a week or so in another country. But we are constantly dealing with dangerous situations, and it is just so stressful and difficult. Perhaps, just perhaps, this film is so "perfect" for me because it resonates so strongly. 5/5
Posted by Steve Kimes at 3:12 PM