Hangin' With The Wild Things. 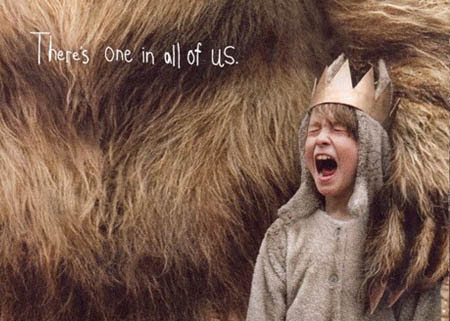 Maurice Sendak is one of the greatest children’s picture book creators in the world and I don’t know why. If you have read a lot of his books—and I have—they are one part charming, one part creative and several parts creepy. Have you ever read the brief tale, Pierre, where a disobedient, disrespectful boy is eaten by a lion? Why do people read this stuff to their children? Why did I? Partly because Sendak gives us all a context to see darkness in the world and a mythological method for us to deal with it. We understand it is imagination, but we accept it. (Pierre turns out okay, btw.)

Spike Jonze and Dave Eggars captures that sense in their narrative version of Sendak’s most famous work. They provide some background and beauty to the original story that it lacks, as well as a spare story. And this movie is all about children, especially boys. It captures the dangerous imagination that boys have, as well as their incapacity to understand social mores. However, this film is not really for kids. My daughters didn’t really appreciate it. But I get it. It strikes me to my core. It is a film written for my inner child. Perhaps you think you don’t want to meet me face to face, but don’t worry—I keep my inner child locked up most of the time. 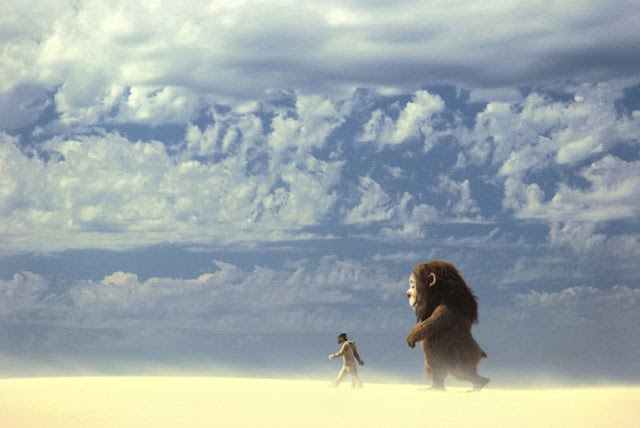 Technical—5/5—This was made brilliantly. It is a complete fantasy—life as seen from the point of view of a hyperactive, overimaginitive boy. Yet it has many touchstones of realism throughout it. Well done shaky-cam, moments where the perspective is from the mother, gorgeous landscapes. And the editing is brilliant—keeping us off guard by giving us long, slow views then suddenly quick jumps. We have no idea what will happen next. And the music—wow. Jonze crafted every scene to be this perfect combination of art, film, music and context. 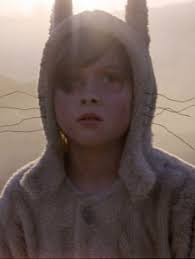 Emotional—5/5—To me, this movie is all emotion. The story is barely an outline that can be fully realized in a paragraph. The whole fantasy sequence is actually conflict of the boy’s emotions and drives—anger, being ignored, drive for connection, loyalty, peacefulness, sadness—all pushing their agenda, attempting to reach some balance so they can all live together. I think you might be able to cut the film into sections which begins with anger, moves into sadness and concludes in peace… only to move to the next section of anger, etc. To me, this film isn’t about narrative, but about emotion. There is a story to emotion and the proper conclusion is finding how to give emotion its own logic and meeting its need. 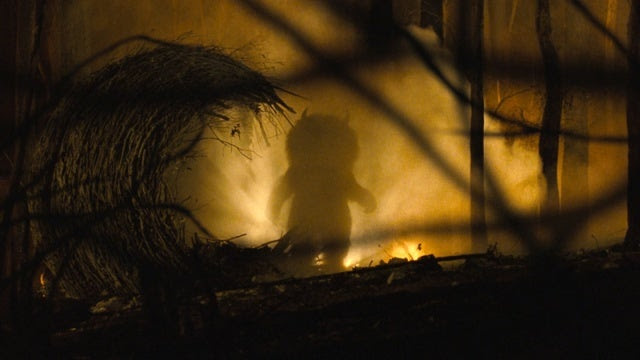 Tension—5/5—WtWTA’s tension builds to an almost perfect climax. The danger is always there, but from the wild rumpus to the end of the film, it is all about the building of tension. It is written all over Max’s actions. He seems so confident at first, then nervous and finally outright hiding.

Interest—5/5—Some have complained that the movie is too slow, that it is just plain dull. And if seeing it on a strictly narrative level, I can see what they mean. Frankly, not much happens and there’s a question whether it actually gets resolved. But the same problem could be seen in the original picture book. Little happens and it doesn’t seem to have a point. The book and the film aren’t supposed to be understood intellectually, but emoted. We are supposed to follow the ups and downs of Max’s emotional state and appreciate the turmoil he’s going through. Not everyone senses that. But between the story of Max’s emotions, the ever-increasing tension, and the beauty, I couldn’t take my eyes off the screen.

Characters—4/5—The only fully developed character is Max, and that is as it should be, because the majority of the story takes place is Max’s head. The story is about the psychological healing of a young boy, and the monsters are simply parts of himself. The dialogue in the fantasy land is the kind of story a young boy would create—unrealistic, but expressing a part of himself and keeping the spare story moving. Yet, for all that, I have to give credit to the actors moving the monsters and the voice actors. These “pieces of Max” were excellent characters, especially Carol, voiced by James Gandolfini. Carol is “the angry one”, but his actions and voice were strangely calm with strong danger behind it. Carol’s anger is powerful and controlling and sudden, but it communicates the danger quietly long before it acts. This is powerful and adds to the horror of it.

Theme—5/5—The theme is anger. The film speaks less about how to deal with anger than seeing the results of it. It goes through a cycle of anger many times, giving us a fuller sense of it each time. And though the language and story is from a boy’s point of view, it is not just about children and it is not communicating in a way that children could necessarily understand. I don’t think children will come away with a better sense of what their anger is, but I think adults would. 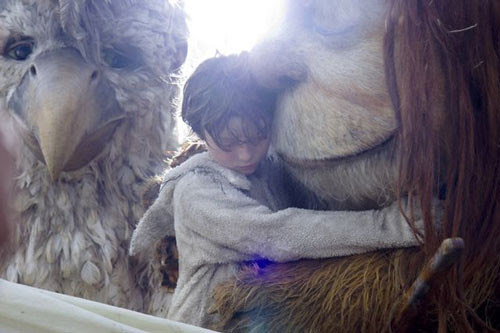 Ethics—4/5—This film is nothing like a sermon. It gives no solution other than Max’s emotions need a mother. It is descriptive, however, and clearly speaks of consequences of one’s emotions. The cause and effect are not clearly pointed out because, like life, relationships are messy and there isn’t an easy finger to point at or solution to reach. This is a perfect film for discussion about issues revolving around anger.

Personal—5/5—Max is my inner child. He screams at injustices and refuses to look at things from all sides. When things don’t go right or his needs aren’t met, he screams and is violent and hurts others. He wishes people would understand him, but his emotional façade keeps that from happening. The best solution is to go away for a while, allow the inner demons to deal with their conflict, allow reason to prevail and then go home for a comforting meal. “And the food was still hot.”

This film hit all my emotional buttons. I can see that most people wouldn’t resonate with it, but it is beautiful to me in every way possible.
Posted by Steve Kimes at 12:04 PM No comments: 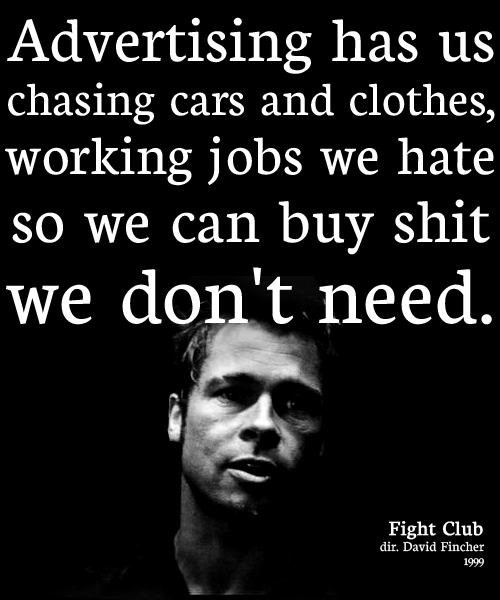 I have a terrible personal struggle with consumerist ideology. To be absolutely forthright, I hate it.

I hate the fact that those with money automatically have power. I hate the fact that the justice system is tilted toward those who can afford better and more lawyers. I hate the idea of “the bottom line is the bottom line” and how that perspective skews thinking from multi-national corporations to religious organizations to humanitarian non-profits. I hate the manipulation of the consumer, convincing them that what they want is what they need. I hate the debt culture and the destruction that it brings to so many.
Am I done?  Yes, I think that’s enough for now.

All of that is by way of confession, to help you understand why I appreciate Fight Club so much. Because the presupposition of the story is that consumerist society is destructive to individuals. It preaches this point as strongly as any African American pastor on a roll. It shows us this destruction in mild ways, such as the IKEA lifestyle, to a philosophical ideal, describing how consumerist society rejects reality, to more graphic ways, as post-accident service workers joke about aspects of rotting corpses.  In the end, our society reflects dehumanization, which separates us from others, from life and even from ourselves. (I recognize the irony that while the Fight Club franchise critiques consumerist society, it also is one of the big winners in the deeply consumerist publishing and film industries).

The focus of the film and the book is not that consumerist society is “bad” per se, but what we, as individuals, should do about it. This is where there are multiple paths to take in the film, multiple ideals to pursue.

First, there is the path of The Narrator (Edward Norton). This is primarily an escapist path. Norton is fed up with consumerist society and he sees the Fight Club life as an alternative existence. He no longer pursues personal comfort or rigid obedience to his employee’s demands as the corner of his existence. Instead, he leaves his apartment (not pursuing the restoration of his former existence), living in a dive, fighting on the weekends in a club designed for exuberance and safety. The climax of his path is the manipulation of his boss to grant him finances without him having to work.  At that point, his escape from consumerist life is complete and he can embrace the edgy life, the “real” life that he has longed for, without the dehumanization of modern society.

As a contrast, we have Norton’s muse, Tyler (Brad Pitt).  For Tyler, it is not enough to escape consumerist society.  Because when one escapes, there is always the possibility of returning.  And one must have some sympathy for all the sad sacks still living in the condition of a half-life, blood being drained by debt and cable television. Tyler demands that consumerist society must fall, for the sake of the individual and for all humanity. That is the second path, the path of organized anarchy.

Rather than fill you will recollections of some of the most radical scenes of the movie, and thus becoming remarkably spoiler-full, I would just like to recount the rules of Fight Club, the most well-known portion of the film.  They are:

If you skipped these rules, go ahead and read them again.  From the Narrator’s perspective, these rules strike the perfect balance.  They clearly are a separation from the controlled, manipulative, comfortable consumerist society. To obey these rules is to embrace danger, but not too much. Although charged with testosterone, at the same time they encourage safety. It is about separation from a society of comfort, but the changes are private, individual, safe.

But Tyler sees something completely different. He sees the core of an anarchist army.  Everyone who participates in Fight Club is learning to accept violence as a way of life. They are learning to embrace life with only limited rules, an alternative set of rules from the rest of society. This is a group of rebels.

But only rebels to society. Fight Club becomes its own rule, its own society. Some of the rules are arbitrary (“No shirts”?), and some are demanding (“you have to fight”). And the most important aspect is secrecy. From the Narrator’s perspective, secrecy is safety. From Tyler’s secrecy is freedom. It illustrates the idea that Fight Club is only a seed. From here, this training in violence, it can go any direction as long as the direction is different from where society is at.

So what should we get from the film, what is its message? Perhaps it is just a testosterone-driven fantasy with a wake up call about spiritual death.  Perhaps it is just a clarion call to drift away from a dead-end society with a warning not to go too far. Or perhaps it is saying that the natural conclusion of freedom from consumerism is anarchy. And that such anarchy must be embraced and planned.

What we get out of this film might say more about ourselves than about the film.