14 Reasons To Love Brazil (The Film)

I'm sure the country has many more reasons to love it, but I've never been there. However, I have seen the film Brazil a number of times and it is a true dystopian classic. Here's why:

1. It’s Kafkaesque.
I think Kafka was a master at getting to the cold heart of bureaucracy, and seeing it for the monster it is. Gilliam reproduces that brilliantly and with more heart than Kafka.

2. It’s truly funny.
Most Kafkaesque dystopias are simply dark and dreary (see Soderbergh’s Kafka of 1991), and Gilliam sometimes is simply silly, not funny (see Time Bandits). But Brazil hits the funny bone just right. I recently watched a film strongly reminiscent of Brazil, Songs From the Second Floor (Sweedish, 2000), but I felt so awful about the people that it was difficult to laugh. Certainly there are moments like this, such as the torturer taking a break to play with his daughter, but more often than not the humor is truly a break in the despair. Sam trying to hold up a sign saying, “Trust me” while Jill is trying to get him off her truck; DeNiro’s appearances as the heroic free-lance duct worker; the graffiti over the propaganda signs—Brazil is a complex film both in plot and emotionally.

3. The feel of Metropolis (the 1927 classic film).
The architecture, the idealized woman, the separation between the “heart” and the “head”, the strong class distinction—all of this invokes Fritz Lang’s masterpiece of the 20’s. It just adds to the wonder of this film. 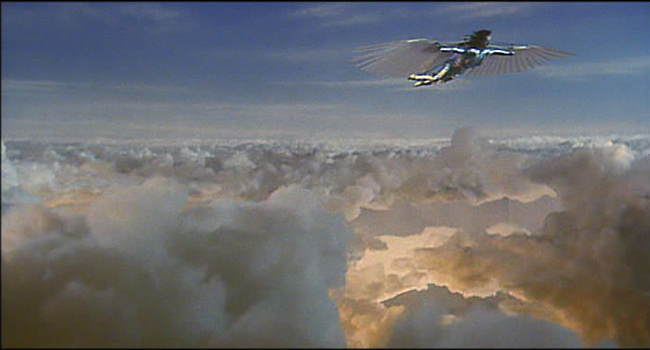 5. Brazil's Influences
Brazil seems to evoke so many films. Sam climbing all over the truck seems to evoke the truck scene in Raiders (1981); Sam’s home with gadgets to help him get out of bed seems to evoke the first scene in Back to the Future (earlier in 1985); the dream sequence, especially with the buildings, seem to evoke Monty Python’s Meaning of Life’s section about corporate takeovers (1983—Gilliam stealing from himself?). Yet they all have a unique take and are completely incorporated in this world.

6. Sam (the hero) is not a hero.
Sure, he’s good on computers, but he doesn’t even use that skill for his love until it’s really too late and then only halfway. He is hapless and confused away from his computer, and when he finds his love he does all the wrong things. And while I might get irritated at him for his stupidity and pathetic nature, in the end, it makes him all the more loveable.

7. No dehumanization
Every character is treated like a human, even torturers, even the faceless bad guys (so similar to stormtroopers in Star Wars) who get killed. Thus the film is reversing what the dystopian society is trying to accomplish through paperwork and propaganda.

8. Fantasy doesn’t save the day.
I am a big fan of fantasy and dreams, but it is a cliché that following one’s dream or living out one’s fantasy will just all work out in the end. That doesn’t happen for Sam. In fact, all his trouble really started when he stopped thinking and started following his heart.

9. The blame isn't on an individual
The reason Sam couldn’t follow his heart is because of the society. Sam’s ambition is perfectly reasonable—to try to woo the girl of his dreams and spend his life with her in a small house. But this dream is unacceptable because the society must control everything, even love. Sam would have had a chance in most worlds, but not in a world of oppression and bureaucracy.

10. The Reality
Much of Gilliam’s vision actually comes from real life experiences in the 20th century. People being taken from their homes—think Stalinist Russia. A load of paperwork to confirm terrible oppressive crimes of the government—Nazi Germany’s Holocaust. An “acid man” to do plastic surgery—based on a real event from Gilliam’s childhood. Even the shoe hat-- yes, there really was such a thing as a shoe hat. There are many more explained in Gilliam’s commentary on the film.

11. Gilliam’s art perfectly realized.
Gilliam often does artwork for each scene before it is made, so he just re-creates his artwork in real life. Sometimes in his films that artwork is too gaudy (The Adventures of Baron Munchausen) or confusing (The Imaginarium of Doctor Pernasus), but here, the world is complex, but easily seen. Not a single shot is too complicated to take in.

12. It’s complexity.
It is hard to really get a full sense of the film in one viewing. I almost think the way I watched it this last week—once through and then a second time with Gilliam’s commentary—is the best way to watch it. We get a much fuller idea of the whole vision. It’s easier to remember that way as well.

13. It's Everytime/Everyplace
Many of the ideas and motifs come from different places and times in the 20th century. Some fashion is drawn from the 40's, yet Jill is dressed in an early 80's New Wave style. The building and room designs come from all over-- Egypt, Germany, Los Angeles-- from different eras. Thus, this isn't a satire on the UK or the US or any specific place. It's a critique of any culture that goes too far into its own system without really caring about people's needs.

14. The end. (Spoilers here, in case you couldn't tell)
The “Love Conquers All” version is too pat. Gilliam points out that most people think Sam is dead, when it is clear that he is moving at the end of the film. Instead, Sam is in his dream, permanently with Jill, in their little house, having beaten the world. Never mind that Sam will be transferred to a nursing facility and eventually euthanized. For the rest of his life he is happy. This is certainly a bittersweet ending, at best. But it’s complexity fits the movie perfectly. Both Sam and the System won. It is both realistic and fantastic.