Lake Of Fire: A Lesson On Rhetoric

Two words that in this day and age are an oxymoron when placed in conjunction: "abortion" and "objective."

It is almost impossible to discuss abortion while remaining balanced and unemotional, at least in the United States. It is difficult to speak about those who hold to an opposing view of abortion than oneself in a fair and unbiased manner. Words like "bigot" and "sexist" and "unAmerican" and "Nazi" tend to creep out. The whole context is one of high emotion and distrust. And, as is often the case in the politics of the United States, there are two sides, and ne'er shall they meet. Either you are on the one side or the other, and they cannot work together. 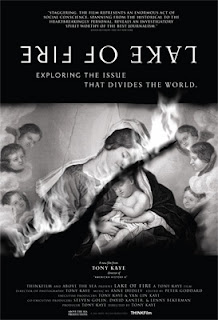 Take, for instance, the film Lake of Fire, a documentary on the abortion debate by Tony Kaye. Tony Kaye, a British filmmaker, claims that he does not know what stand he takes on abortion. However, everyone he interviews makes it clear that they know and they will tell the camera exactly what they think is true, in no uncertain words.

First up are the religious fundamentalists who are the focus of the first half of the film. They are the ones who say that the Bible teaches that abortion is murder and that America should be a Christian country. In a Christian country, they say, people would face the death penalty for killing innocent human lives. And yet they find some of their members being killed by society for killing doctors who kill fetuses.

The second half of the film focuses on the arguments of the pro-choicers. Although some of the arguments are the rights of women, most of them are about the need to recognize that sometimes killing must happen for a greater need. Most of them consider abortion, as one of the pro-life speakers said, "the lesser of two evils". At the end of the film, the pro-choicers are more articulate and more willing to recognize that we live in a secular society and we need secular reasoning to pass laws.

But despite all the talking heads, the most powerful segments of the film are the introduction and conclusion, each of which depict an actual abortion. The first is grizzly, with a chopped up tiny infant being displayed for the camera, a severed foot with clear toes measured at a half inch. The capstone of the film focuses on a woman, struggling with relationships, making a tortured decision with kind people leading her through the steps. Her scenes end with her weeping and saying, "It's hard... but I made the right choice." These abortions depict the two sides far better than the multiple talking heads. One focuses on the terrible death of an infant. The latter focuses on the life of a woman. In making a decision about abortion, both must be considered.

Lake of Fire is often considered an objective perspective on abortion. And it certainly has all the trappings of objectivity. It allows both sides to speak with equal air time. It shows, through the two abortions, the key features that stirs all the rhetoric. However, it is not a fair representation.

From the pro-choice side, I have read that there is a concern about not allowing enough women speak on the issue. I will say that although women do speak in the film, they are not the most articulate voices in the film. For the pro-life side, Norma McCorvey (AKA Jane Roe of the famous case, Roe v. Wade, which made abortion legal) was very articulate in telling her journey from being pro-choice to becoming pro-life. But for the most part, the "stars" of the film were men.

Now I'm going to come out of the closet and freely proclaim my lack of objectivity myself. I am pro-life and have been for a long time. And, although I am religious, I did not come to this position as a religious belief. Frankly, I don't think the Bible speaks to the issue at all, and the verses that relate to the unborn are vague at best when dealing with the issue of abortion. Nor do I have a church tradition that tells me what to believe. I came to my point of view from a philosophical perspective. And from that perspective I want to say why I felt that Lake of Fire is not objective.

The viewing of this film cut a hole in my heart. I felt like a knife was being driven into my chest again and again. At first because of the abortion that was depicted right at the beginning of the film. It is frankly the most graphic visual depiction of an abortion I have ever seen. If the film had been in color instead of black and white, I would have vomited. 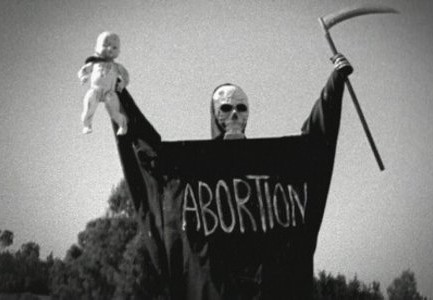 But frankly, worse than that was the rhetoric used by the "pro-lifers". The religious fundamentalists who don't care about differing points of view or seeing things from another persons' perspective. They don't care that our country is secular and so public policy decisions must be discussed in a non-religious way. And the depiction of these religious fundamentalists are interspersed with stories and interviews with murderers of doctors who perform abortions. The point of view of these murderers is clearly articulated: "Mass murderers should be killed, and if my country won't do it, I will." Frankly, the rhetoric is offensive and the inclusion of murderers as representatives of the "pro life" movement is unbiased at best or a deliberate attempt to undermine the position at worst.

What the film doesn't represent is the more reasonable, articulate, and compassionate side of the pro-life movement. First of all, there is a strong side of the pro-life movement called "consistent pro-life." It is a side that is articulated by both conservatives and liberals, both religious and non-religious. It says that all human life is to be protected and that the life of an abortion doctor, a mother with AIDS, a child in Africa and a fetus all have the right to be protected from death. We say that abortion isn't the only issue that needs to be changed, but also war-- where innocents die almost daily by American bombs-- and the death penalty should be stopped, for they are all crimes against humanity.

The film doesn't depict the kind care and service of women that happen everyday in thousands of communities in the United States by pro-lifers. That there are Crisis Pregnancy Centers, adoption agencies, homes for unwed mothers, all set up to make it easier for women to carry out their pregnancies and to give the baby up for adoption.

I would love to have all pro-lifers watch the film Lake of Fire, to show how the pro-life movement is being displayed. No matter how reasonable some of these leaders seem, they all look like religious fanatics and they seem to be associated with murderers. We need more reasonable, articulate spokespersons for the pro-life cause. People of peace as well as people of learning. They are out there-- Ron Sider, Peter Kreeft, Ron Paul. It is sad that they are not given a part of the limelight to give a balanced perspective.
Posted by Steve Kimes at 8:39 AM