Review and Analysis of Martha Marcy May Marlene 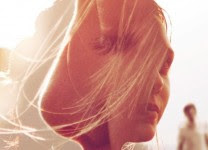 For brevity's sake, from here on out the film, the story of a woman who escaped from a cult to live with her sister and husband in a beautiful lake house, will be called MMMM.

There are pieces of the film that I felt were brilliant.  I know that many people found the editing distracting, but I thought it was fantastic.  Frankly, how else could the story be told?  If it was told in a chronological fashion, it would give away too much, too soon.   The acting was fantastic, especially Elizabeth Olson, who plays the title role, and John Hawkes, who plays Patrick, the charismatic cult leader .  The fact that they make the commune a personality cult rather than a religious one, makes sense and was a smart move, because it is too easy to make a religious cult leader smarmy or crazy.  This cult was perfect as it displayed both the ideals and the weaknesses.  The sociological critique was also subtle and thoughtful.

For all the wonderful aspects of the film, it still left me a bit empty.  What is the film about, really?  Is it about the family relationships?  If so, it’s pretty depressing, because neither family really accepted MMMM for who she was.  Is it, ultimately, a thriller? If so, it may be the longest start of any thriller, and it isn’t very thrilling for most of the film.  Is the central point a subtle comparison/contrast between “normal” life and life in a radical cult?   This is the most interesting aspect of the film to me, but it seems to be undermined by the end, when the “thriller” aspect of the film takes over.   The interplay between two very different cultures displays the weaknesses of both cultures, but the end undermines the equality and gives all the serious negativity to one side alone—“Well, MMMM’s family may not be great, but at least they aren’t as bad as this.”

Personally, I think I’ll stick with the film as a critique of both society and alternative communities, and forget I ever saw the ending.

Below is the analysis of the film which definitely contains spoilers.

Exactly what kind of critique is being offered by MMMM?  There are two worlds being presented in the film.  First is the world of the commune, an alternative community which exists on very little cash (they sell crafts in town), and have a peculiar pecking order for authority and sexual relationships.  It is an idealist society based on principles of peace and love and community.  The second world is the “normal” world of jobs and consumerism, privacy and genetic connections.   The world where you keep in touch with family,  a single family for a single home and you don’t say what you really think unless you’re really upset. Apart from the more sinister aspects of the cult, the film offers a number of critiques of community life.  First of all, the economics of the community simply don’t work.  They are forced to steal to maintain their community of love.  The biggest critique has to be the authoritarianism that seems inherent in such community life.  Someone not only has to have a vision, but the community as a whole seems to be revolved around the Patrick's needs and quirks.  Every woman is brought into the community via a baptism of “date rape”.  The other men in the community seem to have the opportunities for sexual action after the Patrick is done with the most recent woman.   There is a highlighting of the sexual inequality, as the women only eat after the men are finished.  And there is a highly sexualized tone of the community in general, where each woman sees the Patrick as her boyfriend/husband, while the other men can be mocked or disregarded completely.

But the film also pokes at society at large.  The demands of family seem unreasonable, and they clearly have no idea how to assist someone dealing with PTSD and depression, apart from veiled threats.  The outside world seems very uptight and narrow minded about many aspects of human life, including nudity and what is appropriate to communicate.  And the economics of capitalism, compared with community life, seems wasteful and self-centered.

But all of this critique can be taken with a grain of salt because it is made by a woman who has been clearly traumatized by her brush with community life.  As a person who lives in community, and is a leader of two different styles of alternative living (albeit distinctly Christian ones) I am disappointed that the movie seems to pull punches toward society at large.  The basic idea seems to be: “Sure, our society has weaknesses, but the alternative is worse.”   I would have preferred a stronger statement on the broader culture.

I am also a little uncomfortable at the critique of community living.  I don't think that Patrick's community is, in the film, necessarily representative of all alternative communities.  However, I think that there is a dig at all alternative communities-- while they all may not steal, they are not economically viable.  And they are too idealistic for their own good might be a critique of all communities.  Again, living in community and having visited many different kinds of communities, these critiques might sometimes be correct, but are often not. Certainly an implication of authoritarian leadership in

One last thing I want to say, which is about the ending.  I don’t know if everyone who watched the film got this, but it seemed like a very subtle way to say that Martha ended up back in the community.  Perhaps a couple people would say, “How do you know this? The ending was pretty vague.”  Yes, visually we are left with the community approaching to attack the car carrying Martha, her sister and her brother in law.  But we are given two more pieces of information.  First of all, the final name in the title is Marlene—a name never mentioned in the film.  It implies that our protagonist is given four names, while only three were mentioned in the film.  And as the credits roll, we are given a song, sung by the cult leader, about Marlene, which means that the cult captured her, gave her another new name and then accepted her as this new person.  This leads to speculation about her family—what happened to the couple?  I can only come up with one conclusion.
Perhaps the ending was obvious to all of you who saw the film.  But while I dislike what it says about the message of the film, it was really well done and gave the final period to the statement:

Creepiest. Cult. Ever.
Posted by Steve Kimes at 6:28 PM