The Searchers, Racism and Ethics

Amidst my friends on the Filmspotting Forum, there has in the past been a debate as to whether the classic John Ford Western is racist.

It’s a very good western.  Most of the performances are weak, but the direction and storytelling are powerful.  The buildup to the first Comanche attack is a perfect example: The audience knows what will happen, but the family in the farmhouse doesn’t, but they gradually gain more signs and it builds until the oldest daughter screams.  What a perfectly done scene.

The story is pretty basic:  John Wayne and his companion Jeffery Hunter seek out a kidnapped girl and perseveres until they find her.  It is the many details that make this film.  The hints of an old crush a woman has on her husband’s brother.  The casual avoidance of telling any details because of the horror seen there.  The occasional perspective of a woman waiting for her noble, tongue-tied paramour.  A couple characters that are Swedish immigrants.  Just as interesting is what the film doesn’t tell us.  We never find out what happened to Ethan in the three years between the Civil War and the beginning of the film, even when certain things are begging to be explained.  Nor do we find out what happens to Ethan after the film, although he was going to be taken to trial for murder.  Each detail means nothing in itself, but put together,  this film is a whole world, a complex of activity and life.

But is it racist?

There is no question that John Wayne is racist.  Not the actor, but his character in the film, Ethan.  A point is made of it in the film.  There is one group of Native Americans, the Comanches, whom Ethan completely despises.  He will kill them if he has a chance, his companion, Martin, is concerned about what he would do when he meets the Comanches and when another main character identifies with this group, he attempts to kill that person as well.

However, just because a character in a film is racist doesn’t make the film racist.  Martin, a fifth-blood Cherokee isn’t racist at all, and sees Ethan’s racism as a danger in their overall goal: to rescue the girls of a destroyed farm family.   Certainly in other films, pro racist statements are make more boldly, such as American History X or Do the Right Thing, yet the films are clearly anti-racist.  Just because a main character is racist doesn’t make the film so.

The confusion comes in because of the strength of Wayne’s character.  John Wayne, as usual, is the strongest presence in the film, with only occasional scene stealing from Ward Bond, playing the Reverend Captain Samuel Johnson Clayton.   But, oddly enough, he is also often the wise and even the ethical voice of the film.  Ethan shows knowledge beyond what one might expect, including multiple languages.   He knows the habits and customs of many different cultures.  He knows when to allow the horses to rest and when an informer is really a betrayer.  Everyone else in the film is slow or simply average.  Ethan alone shines.

Perhaps Martin is the ethical voice.  He stops Ethan from killing and expresses more liberal values.  But if he is the ethical voice, it is a weak voice.  He is committed to doing right, but at the cost of his girl and the life they should be having together.  He returns home to disrupt her wedding to another man, and then he leaves again.  This seems like a strange action for a moral model.

In the midst of a confusing mix of details, we could get bogged down for a long time.  Perhaps it would be better to focus on the main moral theme of the film, and see if we can make any headway there.

There is one strong recurring theme in the film, and that is family.  Martin constantly chaffs at the fact that Ethan doesn’t consider him family.  Martin was found by Ethan as a baby, and was raised by Ethan’s brother.  Yet Ethan makes a clear distinction between blood family and others.  There is a responsibility, an eternal loyalty to blood family, but others can come or go—it doesn’t matter.   Family was attacked, family values attacked and family loyalty is tested over a period of years.

For Ethan, this loyalty to family extends to peoples.  Ethan has a great respect for almost all peoples.  They have their own values and culture and Ethan gives them enough respect to learn their languages and ways, so he can best communicate with them.  But when a member of his family verbalizes a rejection of their people, the Ethan must kill that traitor.  There are clear lines between peoples, and these lines must not be crossed, which is probably the reason Ethan has a hard time accepting Martin.  Ethan’s philosophy is a consistent one, and one’s loyalty to family is strongly connected to race, and thus to racism.

Martin, of course, voices a different way of looking at things.  He is mixed race himself, and believes that one’s family has more to do with love and connection rather than blood.   He searches with Ethan in order to protect the world from Ethan’s prejudices.  In this way, Martin is the most redemptive person in the film, the one with the noblest quest.  Nevertheless, the film is not really about his quest.

In the end, which point of view wins?  The only way to determine this is to discuss the ending of the film, so if you want to avoid spoilers, please stop reading now.

Debbie, the kidnapped girl, is found by Ethan and Martin after years of searching.  When found, she meets them and tells them to go.  She has married a Comanche warlord and they are now her people.  This is when Ethan tries to kill her, but Martin stops him.  When the Comanches follow the duo, they find Debbie again, and after her husband is killed, she gleefully returns back to the European world, making it clear that she never wanted to be with the Indians at all.

I believe that Debbie’s decision indicates the leaning of the film.  She, too, holds to the same values as Ethan.  She is loyal to her family, and only rejected them to save their lives.  Her real people are the people of her blood, not the people she had lived with for so many years.  And the final scene, that of Ethan carrying Debbie away, is the glorious and right conclusion.  Blood is thicker than experience.

I will not go so far to say that The Searchers is a racist film.  It is not preaching racism, and it does have Martin as a counterpoint to Ethan’s extremes.  But it is a movie about blood.  How important it is to be loyal to blood.   How blood is more important than anything else.  This is not racism, but it is it’s cousin.  Because to demand loyalty to blood before all else is to make other relations secondary.  So the brother who is in need of a new car is a greater requirement to meet than the homeless man who needs a meal.  And the cheap oil one needs to give one’s family a better lifestyle is more important than the hundreds of thousands of non-Anglos killed for the sake of that cheap oil.

In the end, Ethan’s fate is left open.  So is the fate of his philosophy.  The film leans toward Ethan’s ideals.  As do most conservative philosophies and religions.  But  it is still possible that Ethan will be hanged for his murder. 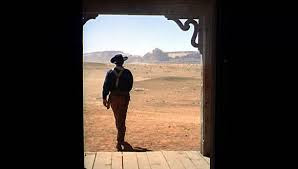