Battle for the Soul: One Flew Over the Cuckoo's Nest

For me, books ruin movies. Not the books written after the movie, but books from which a movie is adapted. When I watched this film in my teens it was soon after reading the Ken Kesey novel, which I found magnificent. But when I watched the film, all I could think of is the many things that were changed, and how the tone of the film differed from that of the book.

Now, more than twenty years later, the book has mostly faded from memory. All three productions of this story-- book, film and play-- melded in some vague outline of a story. Yep, time to watch the film again.

What the film stands against this time is years of going into various state and private mental facilities in Oregon, including the one where this was filmed, the State Hospital in Salem, Oregon, in a pastoral role. I've had a lot of experience with the mentally ill and have seen hospital officials deal with their clients in many different situations. How does this film hold up against that experience? 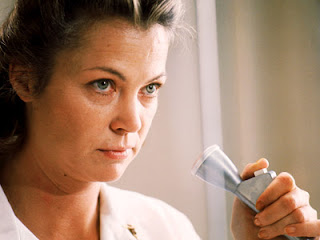 Amazingly well. Mind you, the situations in 1968 were quite different from the last 15 years when I've visited institutions. At this point security is set at a much higher priority. And after the purging of hospitals in the 80's you don't find many clients able to play cards with other clients.

But much is the same. Line ups for medications, the high priority on keeping control of the clients by the hospital staff, as well as the fact that a prison sentence has an end, but a committed patient, if ordered by the state, can remain in the state hospital for the majority of one's life.

The idea of a con using the state hospital as a way out of prison is brilliant, because then we can see the clashing of these two similar but very different worlds. Both inmates are institutionalized, both are in an underground rebellion against "normal" society. Yet the approach differs. The prisoner often feels trapped, screwed by society. The mentally ill feels screwed by their own minds. Within both institutions, there are those who feel that it is best for them to be set free, to live their lives as they see fit; while others feel that freedom is a trap that forces them to be whom they never want to see again.

This story could just as well be called McMurphy's War. Because it is not just the story of how McMurphy turned the hospital upside down, but it is a battle between two approaches toward health: one, as represented by Nurse Rached is an institutional approach, offering discipline, medication and cool exteriors to assist toward normalcy. McMurphy offers plunging the clients into chaotic human experience, and pushing personal boundaries. While we might personally be drawn to a more human approach, the brutal nature of the film is that of all wars-- it is the conflict, not any single approach, that brings destruction. And when the battle is for the human soul confrontation and competition is the very worst approach, for the fragile soul must be torn in the midst of battle, as seen in divorce courts all over the world.
Posted by Steve Kimes at 3:21 PM