The Everyday Rebel Without a Cause

Mic Eddy is a homeless, with red hair and pale skin and an outgoing disposition. He's in his twenties, and has obtained and lost some jobs, but he doesn't care about that. What tears him apart is the lack of respect that he experiences daily, because, frankly, everybody dislikes him. He acts like a child, gets in people's faces, destroys property without thinking. He does this because he must have attention and if he can't get positive attention, he'll get whatever attention he can. He drinks so that the negativity that surrounds him doesn't bother him. Honestly, he's a friendly, gregarious, fun-loving person. But he is caught in a cycle of doing all the can to obtain respect, but losing it with every outgoing step he makes.

I thought about Mic throughout this whole film. The film is focused on the relationship between disheartened teens and their broken parents, but deeper it has to do with honor and what one would do to obtain honor. And what one lives with when honor isn't available, or at least the kind of honor that really matters. 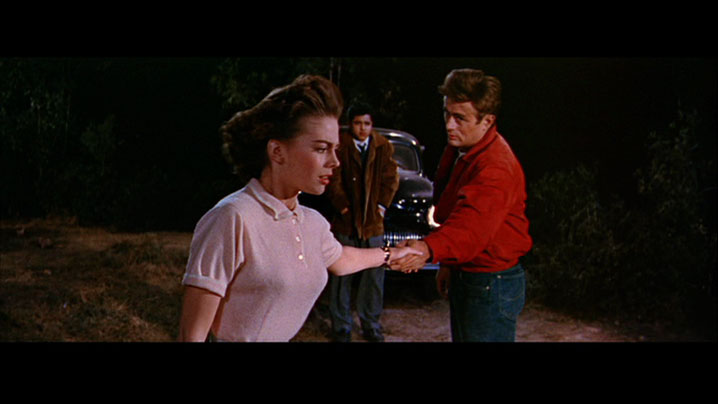 There are a number of weaknesses to the film, not the least of which that I recognize a couple actors from later television sitcoms (although I recognize that isn't their fault-- actors gotta work. But every time I see James Dean's father I see Hurston Howell III, and wonder if Dean's character isn't called Jim Howell...). Occasionally the actors are playing out a silly set of lines, or a shot looks too obvious or purposely pretentious. The fact that all the movement and emotional changes happen within a 36 hour period is a bit too fast.

But when this movie works, it is tremendous. The game of "chicken" is bursting with cinematic power. James Dean is perfect, innovative, hard to take my eyes off of him. The movie captures my attention and doesn't let go. Despite its shortcomings, I can see why this is counted among one of the greats of cinema history and deserves its lofty reputation.
Posted by Steve Kimes at 12:11 PM