Dekalog 5: "You Shall Not Murder" 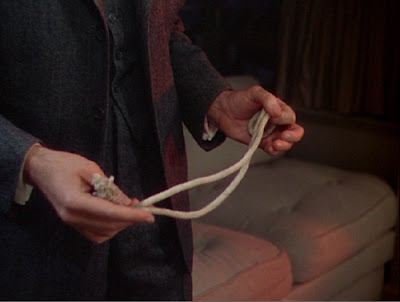 In the Bible, human life is connected to the likeness of God, similar to how pagan religions recognize their statues of their gods. A statue, an idol, is a representation of a god, an epiphany, a singular descent of god upon earth.  Even so, the Bible says that every single human being is an epiphany, a representation of God on earth.  Thus, to kill a human being is to wish death upon God.

But religions debate about the death penalty for murder, as well as legal systems.

Jacek is a young man, full of spite and selfish anger.  He throws rocks down onto traffic, flies in the face of other’s concerns and finally he kills a random taxi driver, for no real reason than he wanted to.  If there was anyone who was a burden on society, worthy of being extinguished, he is the man.  Mind you, the taxi driver was also a jerk, ogling young girls and not helping people clearly in need.   But should such a man be killed simply because he was a jerk?

And this is the question proposed by the film—should a selfish, hateful bastard be killed by a selfish hateful bastard, whether that killer be a random murder or the state?  It presents to us the conundrum of the death penalty—does the death penalty prevent future crime by helping people realize that there are consequences to their actions, or does it perpetuate murder by showing that killing is right in some circumstances?  Is the state a promoter of justice or a fellow murderer?

Although Piotr, the young defense attorney in this case, is clear about his proposal that the death penalty is not a part of a system of justice, I don’t believe that his complex moral arguments represent the filmmakers point of view.  Rather, his statement at the end, when we have finished viewing two deaths in detail is what perfectly presents the interpretation of the whole situation: “I abhor it!  I abhor it!”  This loathing of killing is what we are supposed to have seep into our souls.

Again, Kieslowski does not give us any answers.  The only thing we are left with is anger that killing happens at all.

A slightly longer version of this film, with better camera work, has been released as A Short Film about Killing.