My Toy Story Rankings (no, this isn't a brief post)

This isn't exactly a review of what some have called "the greatest trilogy in film" (those are the people who haven't seen The Colors Trilogy by Keislowski, clearly). Rather, it is a defense of why I think Toy Story 2 is the best of the trilogy. Please don't think I am putting down any of these films. They are all amazing. But only one makes my list of top 100 films. Here's why: 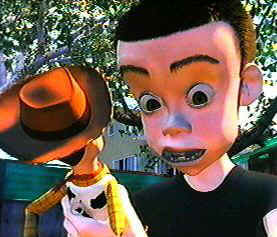 "Who is that happy child?"

Of course, this film is great. It is what started Pixar in feature films and introduced us to Buzz, Woody, Hamm and Potato Head. It also sets up the important themes of the other movies-- double lives, friendship, mortal limitations, faithfulness, devotion. It also gives us the building blocks for the other movies-- ingenious planning, Buzz's bravery, Woody's insight but emotional instability, Rex's small intellect, as well as nuggets that become bigger in other movies-- the puppy, the Emperor Zurg, Mrs. Potato Head, Al's Toy Barn.

However, in the end, this is still a first film and it has the weaknesses of a first film. The main song is great, as well as is "Sailing No More"-- but apart from Ragtime, Randy Newman really shouldn't be writing and singing an entire score. A little more variety would have been good, as there was in the other two films. Also there are inconsistencies. Woody has brilliant planning, but just a little while before he couldn't figure out how to get out of Syd's house and then all of a sudden he knows all the ductwork? Andy hears something drop into the box next to him and suddenly W and B appear out of nowhere? They aren't even on the floor of the car?

But the biggest weakness of Toy Story, in my opinion, are the darkness of some of the characters. Woody is so blinded by jealousy that he isn't smart at all. I'm not saying that it isn't realistic, I'm saying I much, much prefer the Woody of the other two movies. Mr. Potato Head is ready to jump to severe conclusions. In the other movies, all the toys do this ("Woody, don't sell yourself!"), but it's on the normal level of the toy universe, not talk of "murder". How does one "murder" a toy by knocking him out of a window anyway? The accusation doesn't make sense. Buzz is a stellar exception. He is wonderful all throughout, even when he is fuming mad at Woody, or driven mad by his discovery that the delusions were unreal. ("The hat looks good, right? Sure, the apron is too much...").

I feel that they really understood these characters better by the second movie, and they were able to clean up the scripts to make the toy universe more consistent. Frankly, although the first movie is excellent, the second movie perfects a very good beginning. 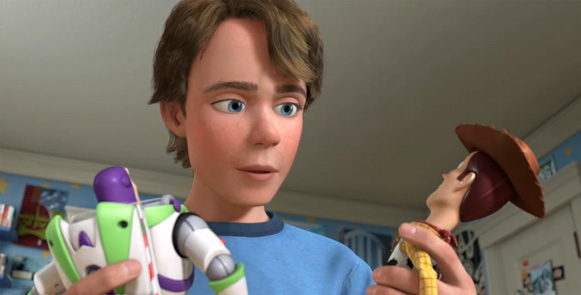 "You have to the end of the week to decide"

The first time I saw this film it was, let's say, less than stellar conditions. A terrible noise ruined five minutes during the climax of the film and just ruined the whole thing (I never did ask the theatre for replacement tickets although I should have).

My family and I watched it again and it was just wonderful this time. Frankly, I think I would have enjoyed it better this time anyway.

The significant theme of Toy Story 3 is mortality. This comes right from the beginning when the classic Randy Newman theme ends with, "Our friendship will never die..." Even though toys don't really die, death is the major theme of Toy Story 3. When toys are no longer wanted by their owners, then their life is over. Sure, they may have some nefarious afterlife in the attic, or perhaps be resurrected by playing with the owner's kids, but in reality, their life is over. Death looms over all this film. And like Gilgamesh (the first novel ever published), the toys are desperately seeking to extend their lives. What makes a toys life meaningful? Being played with. So that's what they want to find-- a place where they will always be played with, never to be forsaken by owners. They want eternal life.

And they find it at Sunnyside Preschool. But instead of a simple paradise, it is a heaven or hell situation. It is interesting how here there is a subtle critique of monotheistic religion. Those who rule heaven are autocrats, choosing some for hell so that they can retain their paradise. And really, isn't that what most religion is about? People choosing themselves for heaven, which automatically means that some are destined for hell.

The toys, of course with Woody's help, escape hell--literal fire-- and find a completely new kind of afterlife-- reincarnation. They can be reborn with a new existence in a new owner's imagination. I really doubt that the authors had all of this religious idealism in mind (although I think they really were critiquing monotheistic afterlife), but it is interesting how this Divine Comedy plays out. They are taking some of the oldest themes of literature and playing it out in a "children's" movie. 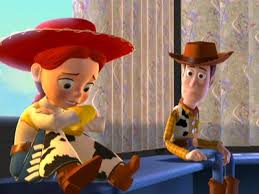 When somebody loved me...

But I still think that Toy Story 2 is the best-- at least in my opinion. Perhaps Toy Story is the Illiad of the trilogy, concerning the "hubris of Woody" and TS3 is the Divine Comedy of the trilogy, exploring the different afterlifes of the toy universe. But I think that Toy Story 2 is more of a piece of art in it's own right, even without exploring deeper themes. TS2 is about loyalty. We saw loyalty in the first movie-- Slink is the personification of that. But Slink's loyalty was unfounded, untested. TS2 is about the test of loyalty-- choosing to be faithful to one's friend even when the situations are at their worst, even when you are given fame in exchange for that loyalty.

In that sense, TS2 is a great example of what Pixar itself is all about. Yes, they make films and program software, but it is not only about the work. It is about the families and the relationships and having fun as a community. The leaders of Pixar could have been controlling, like Walt Disney, or manipulating... but they chose to be about relationship instead. So TS2 talks about what is most important at Pixar-- community over success. And they obtain success anyway. Woody, as usual, remembers what is most important about being a toy-- being there for his owner-- and in that he remains true to his friends.

And TS2 reflects the themes of the others. Friendship despite conflict. Mortality. Rejection of those most important to us. But it does it in the most entertaining fashion. TS2 not only is a deep movie, but it is deeply emotional and deeply funny. It perfects the TS universe, enriches it and keeps it all entertaining, every step of the way.

TS3, I think, it the one that is the closest competition. The universe is perfect there, too, and the writing is excellent, the characters well developed without being irritating. But so much of it draws from the other two films, that it just doesn't seem original enough. And, frankly, I find TS2 more entertaining and more interesting to watch.

All great, but some greater than others.
Posted by Steve Kimes at 11:59 PM