Why Enter The Void Is the Prototypical 2010 Film

Enter The Void is a film which follows the adventures of a drug addict after he dies. We follow him as his carelessness destroys not only his life but his sister's and his friend Alex's. The film is two and a half hours in his head, one long very pretty, very depressing drug dream. 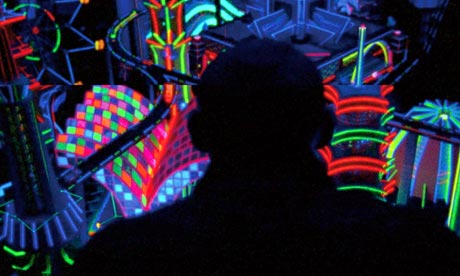 This film is like an extreme version of most of the films I watched in 2010. Some cutting-edge visuals, stylistically innovative, but ultimately lacking in substance or meaning. I'm not saying that there's no meaning, its just that the meaning is shallow compared to the effort and time used to convey the meaning.

But what does all this have to do with 2010? So many of the praised films of 2010 are much like this one-- either filled with miserable lives, or full of stunning visuals but having little substance.

Inception-- Nolan tells you exactly what will happen in the second half of the film, and fulfills his promise with amazing visuals, but is completely predictable.

The Social Network-- A bunch of miserable characters told in a very entertaining fashion.

127 Hours-- Danny Boyles style is remarkable, but it is still a story of a guy whose arm gets stuck under a rock for 127 hours. We know what's going to happen, so the rest of it is style.

I could go on, but you get the point. I'm not saying that these films aren't good-- again there are a lot of stylistic innovation and clever visuals. But that doesn't make these movies great. There simply isn't enough theme or mental stimulation to make them excellent, in my opinion. As far as I'm concerned, a great film stimulates both the mind and the senses. For the majority of films I've seen from this last year my senses have been stirred, but my mind has only been tickled, not challenged.
Posted by Steve Kimes at 11:18 AM

Email ThisBlogThis!Share to TwitterShare to FacebookShare to Pinterest
Labels: 2010