Princess Mononoke Gets A Second Chance 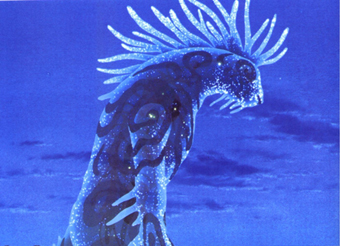 Glossary:
Hayao Miyazaki-- The greatest animated film director who ever lived
Studio Ghibli-- Miyazaki's film studio, which besides Miyazaki films has also produced animated classics such as Grave of the Fireflies, Return of the Cat and Pom Poko.
Princess Mononoke-- Miyazaki's 6th film with Studio Ghibli of 1997 that made Miyazaki internationally famous. "Mononoke" means "monster" and the title is not officially used of any character in the movie.

Princess Mononoke is the most male-oriented of Miyazaki's films. It has a lot of action, and although there is a love story, it isn't a significant part of the plot. It is seen through the eyes of a young man, and it certainly is more gruesome than other Miyazaki.

Alongside of Spirited Away, this is Miyazaki's most visually stunning films. Every frame has so much to see and as ugly as some of the action sequences get, so many of the forest scenes are gorgeous. Every movement is perfect, every background communicates as much as the foreground focus. You could just turn the sound off with no subtitles and it is amazing to watch.

The setting is ancient Japan, just at the beginning of industrialization. Gods roam the countryside, and every healthy tree has a spirit living with it. The plot is focused around the wanderings of Prince Ashitaka, who is forced out of his idyllic home because he was cursed by a demonized boar-god. He gets involved in the ongoing battles of the up and coming industrial Iron Town and the gods of the nearby forest. Ashitaka tries to remain neutral, but finds it difficult after seeing the desires to thrive on both sides of the war, and he is torn by the hatred on both sides. And there are, of course, complications. For one, he has fallen in love with a human on the forest side, San, who grew up with the wolf god. And the Emperor, seeking the key to living forever, has sent a monk to retrieve the head of the forest spirit, which has the power of life.

For many of Miyazaki's movies, I think of them in pairs. The partner to this one is Nausicaa. They both deal with wars between communities and the connection between nature and humanity. The great evil of Nausicaa is fear, while in Mononoke it is hatred. At one point Ashitaka breaks up a fight between San and Lady Eboshi, saying, "You both have the same spirit," meaning hatred. It is hatred that causes a god to become a demon and hatred that causes a human to become a monster, even if their appearance does not change.

The point of the movie, as with Nausicaa, is that nature and humanity should be working together for the benefit of all, rather than battling each other for limited resources. Ashitaka yells out at one point, "Why can't humans and the forest live together?" Ashitaka is seen with distrust from all sides because he won't take a side. But in the end, at least Lady Eboshi considers rebuilding Iron Town in a way that would not harm the forest.

Although Nausicaa takes place long after Mononoke, I think it is better to see Nausicaa before Mononoke, because the potentially idyllic relationship between humanity and nature is more clearly seen there, and the tradgedy of Mononoke can be better seen in this light.

A question one might come from the film: "Why is it called Princess Mononoke? She seems more like a supporting character." I think the key is in the term. "Mononoke" is not a name, but a word that means "spirit" or, more tellingly, "monster". The title obviously applies to San, being as much wolf as human and siding with the spirits in the battle. But the term also applies to Lady Eboshi, who is a marvelous ruler of her town, but when she is ruled by hatred then she is monstrous, horrific. They are both a "princess mononoke" and it gets to the heart of the film. For the true monster is the one who is filled with hatred for either humanity or nature-- the one who is controlled by hatred and pours it out on one's enemy. 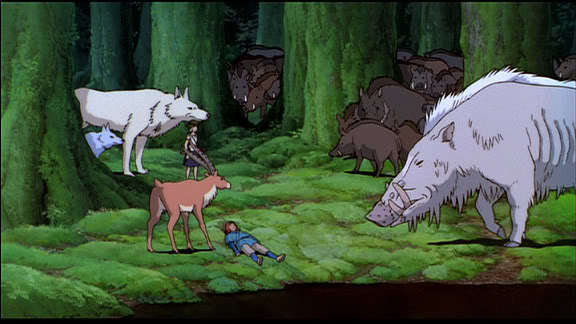 When I first saw Princess Mononoke almost ten years ago, I didn't find it that great. The themes were beyond me, I think, and I couldn't grasp whether the movie was ugly or beautiful. After seeing so many other Miyazaki, however, I can understand it better and appreciate it much more. It still has weaknesses: I think that the motivations of the characters, especially Ashitaka, are unclear, and I spend part of the film in confusion.

Nevertheless, I can now see that it belongs with the top Miyazaki films. It enriches Miyazaki themes, and displays the power of animation in ways that few films can.
Posted by Steve Kimes at 8:18 PM