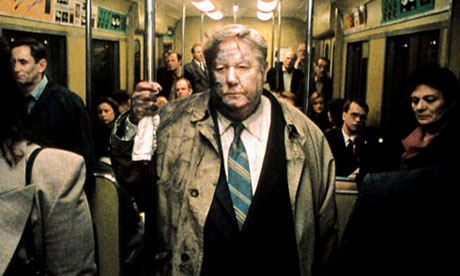 I wouldn't call Songs just a black comedy but rather desperately bleak. The context is a nation where the economic situation is desperate, and no one has any idea what to do. Stockbrokers whip themselves in the street, economists gaze in a crystal ball, entrepreneurs come up with any crazy business plan, all to no avail. The economic situation is just getting worse.

And in that context we are told the story of Kalle, who has torched his business in the hopes that he would obtain the insurance money. His son is mentally ill and won't speak. But this movie is not so much a story as an observation. Kalle and others are in scene after scene, each displaying a single of desperation, of failure, of loss, but there is no progress or really regress. It is just bleak. 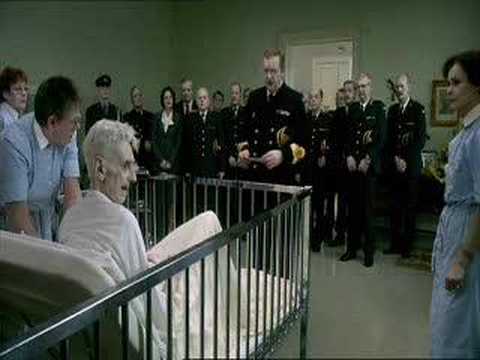 I wonder about the unreality of it, frankly. Sure, there are ghosts, but are they really ghosts or the selfish causes of the economic situation? Is it a reality or an unreality, or simply a perspective, and interpretation of our times? Both the style and themes are reminiscent of Brazil, but the running theme through Brazil is hope-- and there is no hope found in this film.

I can't say whether I liked the film or not. It took a while to get used to, and the ideas are interesting. But could I say I enjoyed it? Well, no. But is it good? Certainly. It is a unique perspective, a combination of Gilliam and Linklater with a dollop of Scandinavian humor. I recommend the experience.
Posted by Steve Kimes at 9:39 AM