You may find that I am posting more about movies of 1957, like Paths of Glory in the last post.  The reason for this is because my movie comrades and I on the Filmspotting Forum are participating in Retrospots, where we grant awards for film of years gone by.  For our first round of Retrospots, we have chosen the year 1957.  This is a year of truly great film, like 12 Angry Men, The Sweet Smell of Success and Witness for the Prosecution and many others.

It was also a pretty good year for cartoons.  Yes, cartoons.

I like cartoons.  I grew up watching repeats of classic Popeye, Loony Toons, Woody Woodpecker, Droopy, Hanna Barbera, Japanese anime, and even Super Chicken.  And so, to provide a *ahem* service for the Filmspotting community, I watched a whole bundle of cartoons from 1957 and reviewed them.  For your reading pleasure, I share them with you, along with my rating out of five stars.  If you'd like to watch any of them, they are all available on YouTube under the name given. 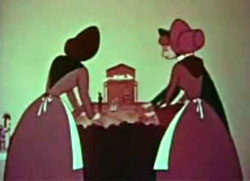 The Candlemaker
A pretty standard Christian moral tale with a conclusion of working hard.  Occasionally the animation is interesting, but nothing exceptional here.  2.5/5 Ali Baba Bunny
A Bugs Bunny/Daffy Duck classic.  Some good laughs.  The tension the duck causes and the brains of the bunny are always enjoyable, and it’s a standard good time.  Hassan chop!  4/5

Hooky Spooky
Casper the friendly ghost.  It started out so well, with a “night school” for ghosts, but as soon as Spooky wants to go to the zoo instead, the imagination ends. 3.5/5 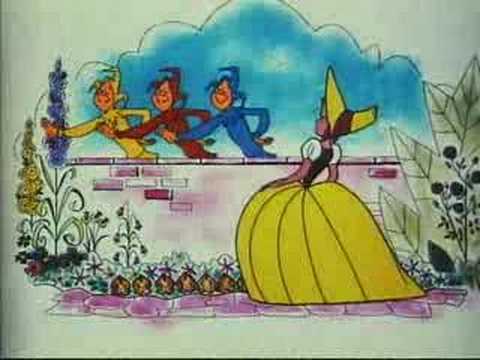 The Story of Anyburg, USA
A Disney moral tale of who is responsible for good driving.  It’s not funny, and the point is pretty dumb, actually.  2/5

The Truth about Mother Goose
A history lesson on the background of three nursery rhymes by Disney.   Disney proves once again that they know how to educate better than anyone and that they really don’t know solid history.  Still, it was fascinating to watch. 4/5

Bedeviled Rabbit
Taz v. the Bunny.  Taz is smarter than he is in other cartoon, and it is better for it, although it really only makes him a substitute for Elmer.  Amusing.  3/5

Red Riding Hoodlums
A Woody Woodpecker knock off with his niece and nephew.  They try so hard and are occasionally funny, but they are just stealing jokes from Warner Bros, and the animation isn’t near as well done. 3/5

Byl Sobie Raz (Once Upon A Time)
A first effort by Polish/French director Borowczyk.  It’s got a lot of imagination put into it, but in the end it is simply too basic.  Not enough to keep ones interest even for its eight minute run. 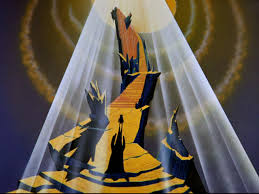 What’s Opera Doc?
Well, this is the star of the year, and no wonder.  It isn’t really funny, but it draws in a lot of elements—from Fantasia, Wagner and the basic plot from Bugs and Elmer—and it is dark.  Really dark.  It is the most different of any of the Warner Bros. cartoons, and the animation is truly artistic.  If you haven’t seen this since you were a kid, try it out.  (I still prefer Duck Amuck)   Kill the rabbit! 4/5

Romeo Rabbit
Elmer has to babysit a romantic (enormous) rabbit for his uncle who promises him 500 dollars to do the job.   Frankly, Elmer deserves every penny.  He forces Bugs to help him out, and Bugs at first is no match for the duo.  Of course,  he wins in the end.  A couple surprises, but a lesser Bugs. 3/5 Steal Wool
One of my favorite WB series is the Sam the Sheepdog and Ralph the Wolf (who is just Wile E Coyote behind a red nose).  These are just two working stiffs, doing their jobs, one to protect and the other to steal sheep.   The action between the bookends is pretty typical Road Runner stuff, except that Sam is almost miraculous in getting out of Ralph’s traps.  The ending of this one is one of my favorites. "Morning Sam."  "Morning Ralph."  4.5/5

Mucho Mouse
Time for a Tom and Jerry mini marathon.  Jerry is a Spanish mouse, who can never lose.  Tom is the champion mouse-catcher from the States.  Tom is too outmatched, it isn’t really fair and all the characters speak, which to me is breaking the rules.  I had no idea the series was created by Hanna Barbera, but this cartoon certainly has the look of later H/B series.  3/5

Tom’s Photo Finish
Spike is framed by Tom for eating the chicken, but Jerry has it all on film, and he begins placing copies of the photo all over the house where the masters will see them.  This is classic T & J.  And Tom doesn’t get beat up too badly.  4/5

Feedin’ the Kiddie
Jerry has a nephew visit for Thanksgiving, who is so focused on food that he doesn’t pay attention to the trouble he gets into with Tom.  I prefer the ones where Jerry actually has a challenge—he’s more fun on the defense than the offense.   3/5

Timid Tabby
Tom has his cousin George visiting, who is scared of mice.  Jerry thinks he can use this to his advantage, but because he can’t tell the difference between Tom and George, he is fooled.  Nice to see Jerry on the taking side for a change.  3.5/5

Tops With Pops
Tom and Jerry and Spike with his son Tyke.  Jerry hides with Tyke, whom Spike loves and protects from Tom.  Some good laughs here, although Jerry is infernally smug.  4/5

Give and Tyke
An unnamed dog is stealing Spike and Tyke’s dog collar so he doesn’t get taken into the pound.  While Spike’s voice is an imitation of Jimmy Durante, the unnamed dog is exactly like Yogi Bear.  However, Yogi Bear doesn’t appear until 1958, when Hanna Barbera open their own studio.  So this cartoon must be part of the vocal development of that most famous character.   There’s a lot of give and take here, but little decent comedy.  Still, this is historic, showing the development of MGM Hanna Barbera to their own studio work.  3/5

Scat Cats
Spike and Tyke have to keep a group of alley cats from getting into the masters’ house when they are away.  Another historic document.  Not only does the voice of Yogi return, but the alley cats clearly precede the series Top Cat, which began in 1961.  Some good laughs in this one.  3.5/5