Paths of Glory: System of Leadership

The court martial movie is a well-trodden path.  And no wonder: it has the semblance of rebelling against authority, while supporting the system of authority.  It provides an opportunity for true actors to really shine in highly dramatic roles.  It has the best of both stage-- a presentation before a limited audience-- and the movies, providing context and drama outside the courtroom.  Some of the greatest movies have been court martial films: Mutiny on the Bounty, The Caine Mutiny, Breaker Morant, and A Few Good Men are among them.

Paths of Glory is certainly among them.  It stars Kirk Douglas as a Colonel in World War I, who is first ordered into a dubious battle and then forced to defend his men from accusations of cowardice.  Beside being a marvelous court martial movie, it  has one outstanding characteristic above the other films: it has amazingly good war scenes as well.  It isn't focused on the court, although it's focus is upon justice and the misuse of authority.  The most dramatic scenes are on the field.  Like another great war movie, The Life and Death of Colonel Blimp, PoG allows us to see inside the whole war machine, from those who command generals to the lowliest private. 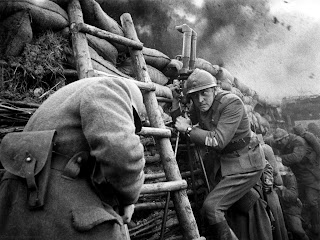 The amazing thing about this film is that it doesn't just target a single bad commander.  Rather, it shows how the system as a whole is built to create those commanders to make decisions that unnecessarily costs lives.   How both a general and a sergeant are supported in evil decisions in order to cover their butt or to obtain a little more glory at the cost of many lives.  And it also shows how such a corrupt system cannot abide by integrity, nor even understand it.

And this makes Paths of Glory unique.  It isn't exactly an anti-war film, because Kirk Douglas, our hero and man of integrity, begins and ends a soldier.  And it doesn't just decry the misuse of authority.  Rather, it says that there is a systemic problem in all military leadership.  That is a remarkably bold statement.  Especially for a film made in the mid-50s.

I do wish that more of the supporting cast had been as stellar as some of the lead roles.  But the sound and cinematography are worthy of Academy Awards-- although the Academy didn't even give it a single nomination. The central battle scene is amazing and it seems to have influenced at least Spielberg, as I can see Saving Private Ryan and War Horse borrow aspects of it.   While not a perfect film, it's a keeper and worthy of the Kubrick label.

Oh, did I fail to mention that it was directed by Stanley Kubrick?
Posted by Steve Kimes at 11:01 PM