The Limitations of Silents and The Last Command My friend 1SO at the Filmspotting Forum commanded me to watch The Last Command.  It was his right.  We have a dictation club and he was my Dictator this last month and the subject was silents.  I had never heard of this film before.  Perhaps I had seen it on lists of good silent films. But I had never read a review, or even caught a description of it.  The title makes it sound like a war film.  So it's a silent war film.

I am not thrilled.

To be honest, I have had this movie sitting on my shelf for weeks.  I needed to watch it, was ordered to watch it, but I kept watching other movies instead.  Even the seventh season of House.  Why?  Because I hesitate watching silents.

One thing I certainly love and that is good dialogue.  A film rarely makes my top list unless the dialogue sparkles in some way.  My favorite books are those with a lot of dialogue.  And I put down The Road because it had very little of it.  So silent films have one knock down right from the beginning.

Also, silent films tend to be either melodrama (like Sunrise: A Tale of Two Humans, a favorite of mine) or slapstick comedy (like The General or City Lights, both favorites).  Not always, but almost always.  And what if I am not in the mood for either of those kinds of film?  What if I'm looking for something more subtle, or more complex, which is usually the case?  Then I'm not ready for a silent.  It isn't that there aren't many silents I absolutely love.  But I don't want to watch that type of movie most of the time.

So, here I am with The Last Command sitting on my shelf.  And, frankly, I almost forgot it was there.  Today, I delved in.

Damn.  What was I thinking?  How was I to know that this was  a character study?  This film was much more like The Life and Death of Colonel Blimp (another favorite) than any silent I had ever seen. 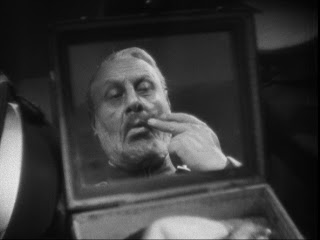 It begins with a director in Hollywood, making Russian films.  He picks a Russian actor, an extra, to play the general in a pivotal scene.  He is humiliated by the other actors, partly because of an uncontrollable head shake, due to a stress event in his past.  Then we see him in his past, ten years before, where he was a real general, under the Czar, in the final year of the Russian Revolution.  And we see his nobility, his honor, and his love of his nation.

It deals with the honor of forgotten, old men, like The Last Laugh, another silent or Hugo, from this last year.  But it deals with it better than either of those films.  Like Colonel Blimp, we see why the man deserves honor, and not just the respect due to us all, and so the conclusion is just that much more thrilling, although somewhat reserved.

What a fantastic, rare film-- whether silent or otherwise.  The acting was marvelous, generally understated, and subtle.  The character Natalie was very complex and hard to read throughout most of the film, due to the excellent performance by Evelyn Brent.  I am also impressed by the script and how it draws in a number of characters, giving them each their time and end.

I only found two weaknesses to the film: I think there was a single misstep in the plot, which make it too tidy (when the train fell into the river) and the music. I know the music wasn't original to the film, but whoever put it in there, to have all the horns blasting nobly throughout the entire film was just too much.  I shut it off after half the film.