Jerry is a young man who seems to do nothing but hang around his wealthy friends and he is not able to do anything but dance well and sing passably.  So he stars in musical numbers and just hangs around.  Dale seems to make her living off of wearing her designer's clothes so they will look wonderful and women will buy them.  I guess she's a living manikin.  Jerry is determined to be "fancy free", but when he sees Dale, he falls head over heels.  She is offended by his forwardness, but he wins her over when they dance together.  But then she finds out that his married to her good friend, and that is where the comedy of errors begins. If I wasn't already a fan of musicals, I could see this film making me a fan.  And actually, this kind of musical I haven't been a big fan of.  The musical where the plot is ridiculous, with really no touchstones to reality.  Growing up, been exposed to musicals like Fiddler on the Roof and Funny Girl, which have a lot of silly aspects, but there is always a deep and often depressing connection to reality.  Even the musical numbers almost make sense in their context.  The only Fred Astaire film I saw in my younger days was Easter Parade, which bored me to tears.

This, however, is my first Astaire/Rogers film.  I know, shocking.  But we all need to start somewhere.  I'll put it plainly: the setting is ridiculous, the plot points silly, the jokes were mostly groaners and the acting was awful, and I really, really enjoyed my time with this film.  The fact that everything was over-the-top silly helped.  Either you embrace the silliness or you reject the whole thing.  And when everyone in the film is in on the big joke that is this film, how could you not appreciate it? 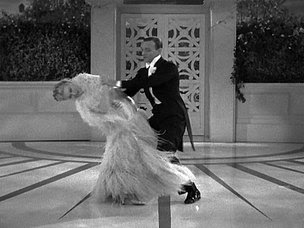 About the dancing: I admit, it was a revelation.  Yes, I had heard about Astaire and Rogers and I had seen Astaire with others, but this was something different again.  They have three main dance numbers.  The first dance was a "getting to know you" dance, friendly, ending with a handshake.  The second dance was clearly seductive: she is infuriated with him, but wants to love him and is clearly over her head.  He leads her smoothly, expertly, with all the cockiness and ignorance of a young man in love, and by the end of the dance he clearly wins her over.  The final dance is simply surrendering to joy.  I have never seen so much emotion and variety in a dance routine before, especially that middle dance.  Never have I seen a straight dance number communicate more than the rest of the movie combined.  I am won over, in a big way.