After a miraculous victory, a general heads to his warlord’s castle, only to be waylaid by a witch who declares a dark prophecy:  At first he and his friend would both receive generous promotions.  And then he would take his lord’s place, and his friend’s son would eventually take his place.  After the first part of the prophecy came true, the general tried to forget the second, evil prophecy, but he could not.  His wife constantly reminds him of the prophecy, fanning his ambition into action.  He murders his lord and takes his place as warlord.  Eventually his ambition and selfish pride gets the best of him and all his plans sour, forcing the whole kingdom to be turned upside down in war and death.

If you are familiar with Shakespeare at all, you recognize Macbeth, one of his most famous plays.  For me, Akira Kurosawa is the king of Shakespeare adaptations.  He keeps the story, but translates them fully into feudal Japan.  One of the most problematic parts of enjoying Shakespeare is the poetry, where I feel I have to do literary analysis on every single line.  With Kurosawa’s Throne of Blood or Ran (his adaptation of King Lear),  you can appreciate the melodrama without the poetry.  It allows the actors more freedom to act without monologues and gives so much freedom for the director. There is so much to appreciate in Shakespearean plots and so much darkness to delve into.

Honestly, though, I have never appreciated Macbeth.  It is too dark, too fully immersed into the growing evil of the central character.  There is certainly a character arc—going the wrong way.  I am more and more uncomfortable as the story goes on.

In Throne of Blood, there is much more to appreciate than just the character.  Right from the beginning, the male chorus with the foggy castle in the distance gives one of the ominous, horror-filled bookends ever.  Mifune, one of the greatest actors of Japanese cinema gives an over-the-top performance, as he is horrified with the circumstances and with himself. 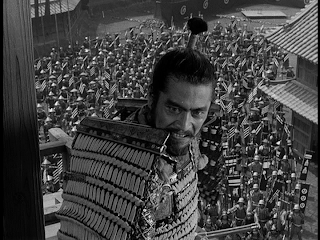 There are many defenders of the original play and story.  “It is a classic story of fate dealing with a man and his wife who made evil decisions.  In their hearts they were ambitious and prideful, and fate led them to a nasty end.  You reap what you sow.  When you give into depravity, you must face the  consequences.”

Okay, I understand this, somewhat.  Certainly it shows the consequence of vanity, arrogance and selfish ambition.  But Mifune’s Macbeth doesn’t begin ambitious.  He was on his way to receive a great reward for a great work.  He had achieved his ambition.  And right in that time, the seed was planted which was to become his downfall.  It did not need to happen, it was not natural to him.  And, in fact, he wouldn’t have even pursued the prophecy were it not for his evil wife (who is played with amazing subtlety in Throne of Blood by Isuzu Yamada—perhaps my favorite performance in 1957).  Even with her pushing, he might not have done the murder if the lord did not come to visit his castle.   He was pushed and pushed until the evil deed had almost accomplished itself, he was just the hand that held the blade.

He was not evil, just weak.  And from this point on, he is treated as the evil criminal he certainly was, but not in his heart.  As time passed, his heart soon caught up with his deed and he became the selfish lord that the witch, the wife and fate determined him to be.  What a horrible fate! All the more horrible, as I know many like him.  Weak, trapped and ultimately committing crimes and so convincing himself that they are among the great evil men.  And who could deny this?  No one.

My only question in all this is: Where is the hope of redemption?  The weak one should have an out, an opportunity for repentance, for confession, for deliverance from his own heart.   But in Kurosawa’s film, as in Shakespeare, there is no hope for redemption.  The path of weakness leads straight to hell.  There is no turning back

And ultimately, this is why I must reject this film, this story.   As the ancient text says, “I take no pleasure in the death of the wicked.  Rather, turn back, turn back!  Why then will you die?”

Or, the more modern text says, “Are you not entertained?”  No.  No, I am not.  If life is like this, it is too horrible to contemplate, even were it true.
Posted by Steve Kimes at 9:23 PM