Quentin Tarantino’s fantasy revenge films are all the rage.  Django Unchained just passed Inglourious Basterds in the worldwide box office, raking in more than 350 million dollars in a couple months.   Revenge seems such a basic theme, and pulp revenge films have always had a low-brow charm, but Tarantino has now brought that lower class entertainment to allocates (and controversies) by granting it a wider audience, especially among cinephiles.

The four (or five) revenge films I count as these:  Kill Bill, where The Bride takes revenge against her co-assassins for killing herself and her unborn child; Deathproof, where a group of women attack a woman-killing stunt driver; Inglourious Basterds, where Jews kill Nazis with glee, even burning Hitler in a movie theatre; and Django Unchained where a former slave kills slave-owners and traders.

Revenge seems such a basic motive and it touches many people.  Let’s use QT’s films as a way to look at this fantasy and what it promotes.  There are four basic principles of QT’s revenge fantasies:

1.       Oppressors and killers are dispatched violently
This is the basis of all revenge: Lex Talionis.  Whatever violence one does, it will be done to them.  We see this perfectly in Deathproof, where Stunt Man Mike is destroyed by a car, even as he killed women with cars.  An oppressor is seen as one with power, but uses that power to harm those with less power, and so that power is used against them.  From Disney films to art films to novels to ancient literature, this is a basic theme of humanity.  It is also the foundational principle of religion, that each person will obtain, eventually, exactly what they deserve.

2.       The oppressed take their revenge in their own hands
This is a theme that QT emphasizes.  Each group takes their own vengeance.  So it is women who kill Stunt Man Mike, Jews that kill Nazis and a black man who kills white slavers.  This is opposed to most forms of Lex Talionis, where the oppressed are powerless and they hand the power of vengeance to someone else, whether that be the police, the military, God, or Prince Charming.  As Django learns, to get justice, you have to get your hands dirty: which means, you have to kill people.

3.       Those who allow or appreciate such oppression to continue are also dispatched

In a turn we haven’t seen since ancient times, QT also kills those who support or approve of oppression. So the sister of Candee who took advantage of the slavery system is gleefully killed.  Any Nazi soldier is killed as an act of justice, no matter what their participation in violence.   It doesn’t matter what level of participation they have, any is enough to be killed as punishment.

In a fascinating move in Inglourious Basterds,  after the Nazis gleefully applaud and cheer after their enemies are destroyed on screen,  when the Nazis receive the same fate, the American audiences are encouraged to applaud and cheer the Nazi deaths.  QT is in equal parts condemning the approval of oppression and death, even of one’s enemies.  The audience cheering his film is made out to be the equals of Nazis.  In Django Unchained, whites are separated from blacks and all the whites are killed.  Even so, QT separates the whites from blacks in his audience, dispatching all the whites.  In Deathproof,  all men who do any kind of harm to women, including humiliation, is implicated.  Nor does QT exempt himself—not only is he implicated in his own films, being male and white—but he has himself killed in Django.  Support of oppression goes to the extent of cheering and glorifying oppression.

What is the end?

What happens to these heroes, the destroyers of oppressors?  Although QT often has his heroes have an uneasy victory at the end of his films, he is fully aware of the end of his destroyers of oppression: like Christoph Waltz in Django, they are killed as killers.  Dr. Schulz receives a similar end as John Brown, one of QT’s historic heroes.  John Brown, who gathered a band of vigilantes to kill slavers throughout Kansas and was later hung as a terrorist and murderer.   This is the end of Django, the Jews in Basterds, and the women in Deathproof—some sort of death penalty.  As for the Bride in Kill Bill, even QT says that if he made a third one it would be about the children of those the Bride killed, coming back for vengeance against her.  Because in QT’s philosophy, everyone should have their day of vengeance.  The world gone blind, indeed, or, in QT’s universe, at the end of a samurai sword.

If QT were to continue this series of films, what would be the next one?  Perhaps a vengeance film against oppressive governments?  Oh, no we have V for Vendetta for that.  What about a group of vigilantes taking vengeance against the rich for their oppressions?  It seems that the new film The East will fit that bill. 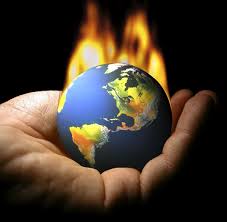 Perhaps QT should do a film about an oppressed third world country,  taking glorious vengeance against the nations that warred against it, and against the nations that financed it?  Of course, we saw that movie play out in real life on September 11, 2001.  From the point of view of Al Qeada and their people, they are freedom fighters against Israel and the “Crusading” western nations that attacked the Palestinians and who refuse to recognize their legally voted in government.

The Kansas Massacre and the Twin Towers burning: that is what QT’s revenge philosophy looks like in real life.
Posted by Steve Kimes at 12:16 PM