What is Love? The Deep Blue Sea and Amour 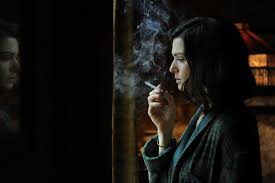 Rachel Weisz (in a marvelous performance) is in deep trouble.  She has left her husband, who loves her for her passion, a younger man who does not love her.  Her despair in this triangle leads her to attempt suicide.  And this is just the first ten minutes of The Deep Blue Sea.

The theme of the film is passion, and the consequences of giving in to our passions.  Passion is gorgeous, but dangerous; it is powerful and destructive.  Certainly it is shown in this film to be a double-edged sword, ending in destruction.

Passion is often confused with love, especially among the young.  This is not to say that passion isn’t an important aspect of love.  Were it not for passion, would our rational minds ever get married, get pregnant, go through birth, raise children?  Passion gives us the energy and drive to accomplish that which our species most needs.  It is the engine that drives our survival.

But is that all of love, or even the foundation of love?  Perhaps it is the engine, but what is the hull, the keel, the sail?  Passion drives love, makes it do amazing stunts, but what keeps love afloat?  If passion were all that love was made of, love would look like a hyperactive boy, flitting this way and that, always attached to a shiny object, running over whatever or whoever is in his way.   Although drawn out, this is exactly what we see in The Deep Blue Sea—the destructiveness of passion, and the ultimate loneliness of it.

It is interesting that within The Deep Blue Sea is embedded the theme of a more recent film, Amour: “A lot of rubbish is talked about love.  You know what real love is?  It’s wiping someone’s ass or changing the sheets when they’ve wet themselves.  And letting them keep their dignity so you can both go on.” 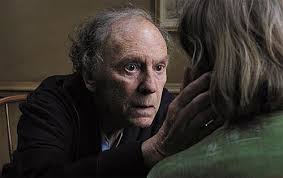 Amour is about the slow demise of a wife and the faithful service to do whatever was needed by her husband.  She has a quiet stroke, almost unnoticeable.  Then another, which leaves her half-paralyzed.  She speaks of ending her life, but her husband convinces her not to, that she is not a burden to him.  As the movie wears on, she becomes more and more of a burden as she regresses to an infant state.  The performance by Emmanuelle Riva is easily the bravest acting I have ever seen, allowing her to be put in the most humiliating positions ever.

Just by its title, Amour asks “Where is love in this couple?”  Love isn’t found primarily in the ending of the film, as some would say.  Love is found in the day-to-day faithfulness, awareness of the other’s need, and spending oneself to meet that need.  As is often true, we can see love in contrast to those who do not display it: the daughter who wants to push her own will because of her own emotional needs, the nurse who has a program and will follow it no matter what the cost to her patient.

Love is the dance of a couple moving to help her sit in a chair.

Love is spoon feeding a spouse when she doesn't want to eat, and learning to give up.

Love is giving her privacy so she doesn't have to inflict her misery upon others.

Love is a wife who is unable to communicate anything but “Hurts… hurts…hurts…hurts… hurts” for hours, and a husband who stokes her hand, tells her a story, sings old songs, until she quiets and is at peace.

Both films speak of the limits of love as well.  The Deep Blue Sea displays passion as having a limited life, quick to begin and quick to end.  The true love of Amour also has a limit: the emotional demands of love takes an emotional toll and it eventually breaks into rash anger.  But the best love recognizes that limitation and prepares for it, even apologizes for the limitations. 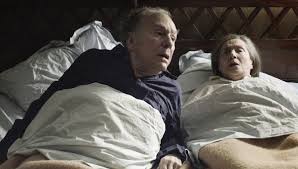 I wish I could recommend Amour as an example for all to observe.   But it is such a difficult film, like almost all of Michael Haneke’s films, that I cannot recommend it to everyone.  My parents are so close to this situation, that the example would only hurt them emotionally.  Others are so young and passionate that Amour would just seem dull and pointless.   But for those who are ready for it, Amour is the glory of love in its most raw display.   The Deep Blue Sea is more beautiful, and has wonderful performances we can relate to.  Amour takes us to the next level of teaching us depth and maturity.
Posted by Steve Kimes at 1:18 PM