The Three Acts of The Deer Hunter Yes, it is long. Three hours long. But it is neatly segmented into three distinct acts, with clear divides between them, so it is not much of a burden to watch.

Act One: The Wedding
It is amazing that he spends a full hour setting up characters and setting, without much going on. It reminds me of Dazed and Confused without the nostalgia, or perhaps the first segment of Fanny and Alexander. We are watching our main characters and most of our supporting characters in their everyday life, over a single 24 hour period. The wedding is central, but it isn't the only event, and it arguably isn't the most important event. What stuns me about this segment is the detail. Every bit of every frame is used, and filled with details. This is a film that deserves to be seen on the big screen or else you couldn't possibly see it all. 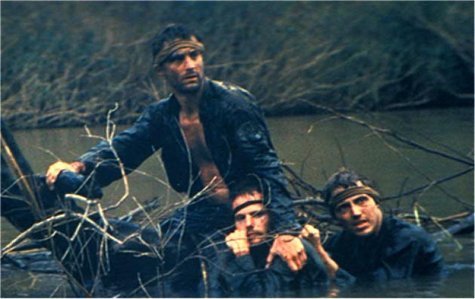 Act Two: War
As rambling as the first act was, so this act is direct and fast paced. The minutes fly as the action keeps us attentive. It is brutal, but after so many war films we are almost used to that, but what amazes me is the repetition. The "game" is repeated countless times in this film, but the intensity is never less. I can understand how one might be addicted to the game, even perhaps playing the game. The danger, once one is used to the level of stress, draws one to it's inevitable tragedy. The various reactions to it feel very true to life. And once we think about it, we realize that war itself is just a version of the game, whether one is a revolutionary or a defender or an invader or a defender. It is an act of suicide through which one intends to harm one's enemy.

Act Three: Home  (Spoilers below)
By this time we realize that setting is everything in this film, and the points are left to the end. You can't step in the same river twice. Community changes as the goal of community are met. Life's a bitch and then you die. Tragedy changes everyone, even those who haven't experienced it. Suffering isn't always for good. And any number of other cliches. Yet watching it, we see that when people are living it out, these life lessons cannot be reduced to a cliche. By this time, these are real people and we can't just dismiss them or their experiences. All the characters are caught in a catch-22, unable to live and unable not to live.

Certainly some brilliance there, especially in the cinematography and direction. It's one of the few times I can say that I saw a movie with Meryl Streep and she wasn't the best thing about the film. It is big and sweeping and somewhat tragic and, probably unforgettable. A great achievement. Epic.
Posted by Steve Kimes at 11:54 AM