Never Let Me Go: Half The Truth

Never Let Me Go is the story of a love triangle that must, by necessity, end in tragedy.

Don’t worry, I didn’t give away the ending. We see this in the very first scene. There is a mystery to uncover, and the script is masterful in its slowly unveiling the mystery of this alternative history of the world. Everyone in this world is healthy and whole. No one has any serious health problems, everyone has good work, and seems at peace.

Everyone, that is, except those who suffer so that society might be perfected.

The greater the civilization, the greater the level of human sacrifice. Some societies actually killed them, other societies enslaved them, in our society we make human beings work two jobs and punish them if they become homeless because of layoffs. This is not because society must function on a two-tier level. It’s just that it always has.

In order for this to work, we must dehumanize the lower classes, and if not completely dehumanize them, we must make them immoral, to blame them for their own poverty and social standing. Only in this way may we feel free to justify our economic slavery, our denial of good health and the benefits we enjoy. We may toss them a bone, and we expect them to be grateful because although we aren’t allowing them to have shelter or health care or a decent education or any real economic share of what we are enjoying, we know that they would be worse off if we weren't offering them as little as we are. It's the excuse the masters always gave to ease their guilt of having slaves. 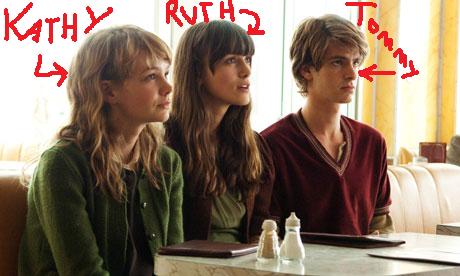 How I wish this film was made to point out that the alternative reality was not an alternative at all, but it is how we live, today. The third world, the immigrants—legal or illegal—the homeless, the working poor: these are the Ruths, Kathys and Tommys of this world. But rather than highlight the similarities, it seems to highlight the differences. Somehow, it would be worse if the human sacrifices for economic freedom is well dressed, white, gorgeous, Anglo Saxon and speaks with an educated British accent. It helps us feel for the oppressed and downtrodden, and helps us forget that the Latino we buy fast food from or the migrant worker who picks our vegetables in South America are the real, living tragedies.

This movie is to help us feel comfortable in our oppression. Look, it says, at least we aren’t doing human sacrifice. We haven’t gone that far, and we could have. At least we recognize our social lesser as being human, even if we don’t treat them as our legal equals. But it does not move us to act for those who suffer for our lifestyles. It allows us to remain complacent.

I am not saying that Never Let Me Go is a bad film. It is will made, beautifully shot, and well acted. It has all the pieces of a good film. However, it could have been a great film, a film that changes the way we see the world. Too bad it's not.
Posted by Steve Kimes at 11:18 PM