A Little Bit of Vengeance Never Hurt Anyone

In the summaries of some films, some minor spoilers are there, but none that would ruin the film being discussed.

Vengeance films are the most disturbing films I've ever seen, and they are more common now than ever.  Perhaps this is simply a trend, but I suspect that the focus on vengeance is a result of the fear of enemies that is running rampant in many societies today.

It is interesting that movies often reflect our fears, and our fears reflect or become our reality.  In Japan, the atom bomb destroying their cities caused a huge fear of nuclear disaster, thus the many monster movies.  Now Japan again must face their fears as radiation from a disaster spread over their whole nation.  Even so, the United States and South Korea have these vengeance films, more now than ever, and even so, their nations are being threatened by grave enemies, which spreads fear and increases the need for some kind of consummation.

The most disturbing vengeance films come from South Korea right now.  It is difficult to say which film is more disturbing: Oldboy or I Saw the Devil.  Oldboy is about a man who lost a decade and a half of his life and he vows to take revenge on the person who paid for this crime.  It is more disturbing to find that it was originally done as revenge against a childhood incident.  The end of all this vengeance is madness. I Saw the Devil is certainly more graphic, so much so that I'd be tempted to call it "torture porn". Devil tries to show that to make a murderer feel the victim's family's grief and loss is difficult, if not impossible, and can only happen by becoming a monster worse than the one you are taking vengeance out on.

Both of these films are disturbing, however, not just because of their violence, but because of the attractive nature of the violence.  In Oldboy, much of the violence is not dissimilar to an intense martial arts film, so it specifically draws in those attracted by such images.  I Saw The Devil would draw more of the horror crowd with its intense graphic violence.  Even though both films want to communicate the drawbacks of violence, the very nature of the films themselves cause that message to not be heard.  Both films develop a blood lust in the audience and the film isn't over until that blood lust or desire for full vengeance is fulfilled.  Once the bloody justice is achieved, then the film ends.  No matter what side moral is communicated, it is lost by the end of the film.

A more interesting vengeance film is Tarantino's Inglourious Basterds. It mixes history around quite a bit in order to have a perfect vengeance against the Nazis, all done by the hands of Jews. It is an obvious, over-the-top, red-white-and-blue-all-America's-enemies-will-die war flick.  Except... the scene in which the Nazis are watching a film and laughing and cheering at Americans being killed by a German Ramboesque hero seems a little too close to the response Tarantino is hoping to illicit from the Americans watching the film.  In fact, Tarantino is subtly undermining such vengeance flicks by pointing out that such rejoicing in the deaths of the enemy is more a Nazi characteristic than an American right.  But if that was Tarantino's point (which I'm sure it is), it is too subtle. Almost no one, especially those who really enjoyed the vengeance aspect of the film, understood that, and if they did, they wouldn't care.  More often than not, digs against the attitude of vengeance only increase the attitude that, given the right circumstances, vengeance is one's "right", and it is the true "justice."

Some real dismantling of the vengeance idea occurs in the film Sympathy for Mr. Vengeance, directed by Park Chan-wook who also directed Oldboy. In this film, we can see the desire for vengeance coming from the same sorts of incidents as the first three films we discussed-- murder of one's child. However, the murderer is a real person, not just a caricature, and he isn't a "bad guy," but rather someone who is desperately trying to get his sister an operation.  He takes some bad advice and everything goes wrong.  But it only gets worse and worse for everyone involved.  In Sympathy, not only do we see the "bad guy" as someone who we must pity rather than truly being an object for vengeance, but we also see that vengeance doesn't ever end with one act.  It leads to a string of vengeful acts, each taking revenge on the criminal behavior of the former one.  As Gandhi said, "An eye for an eye leaves the whole world blind."  Or in this case, dead. 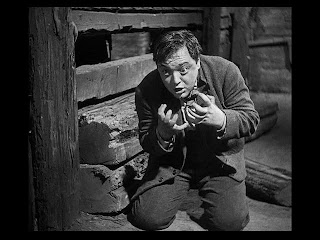 In pondering all these films, I re-watched the Fritz Lang classic M this morning.  There are many of the same themes: a murderer of children, a city in fear, the determination that something must be done. But here, the act of vengeance against a terrible criminal is thought out, deliberated, rather than being the act of a single individual or a mob. The murderer is played brilliantly and sympathetically by Peter Lorre.  And he is allowed to state his case: He is compelled by his inner demons to do such acts and he wishes he were not this way, but he can't help it.  In response, two sides are presented: first, that because he can't help it means he must die because he is creating chaos.  Second, that he must not die for we are all prone to do bad or even evil things, usually by our own will.  And rather than make a determination of seeing the murderer as someone who is sick or someone who is destructive, the film leaves us with the middle of the conversation.

What is better for a criminal: punishment or rehabilitation?  If punishment, why?  So they can feel what the victim or the family of the victim feels?  They can't.  They won't. Even if they feel remorse, that is a different pain than grief or anxiety.  In the end, vengeance isn't about the criminal at all-- it is a selfish act to try to overcome one's own mental state.  If we are to get past the cycle of vengeance, then we must see everyone, even criminals and murderers as human beings, people like us.  This doesn't mean that they shouldn't be separated from society, but vengeance does no good and brings no real satisfaction.
Posted by Steve Kimes at 11:43 AM