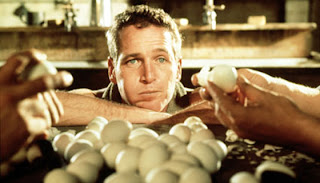 What is there to say about Cool Hand Luke that hasn’t already been said a hundred times before?  A high point of 60’s cinema, which already has a number of high points.  A brilliant script.  Magnificent performances, headed up by one of Paul Newman’s greatest roles.  There wasn’t a dull moment, or a misstep in the entire film.  It is almost a perfect film.

The only thing left to talk about is the theme, although that has been covered ad nauseum.  The general consensus is that Luke is a Christ figure, a reanimation of Jesus in celluloid, transported to a Southern work farm prison.  Although I had never seen the film, I had heard this idea, and it was difficult to watch the film without looking for hints of messianic complex. 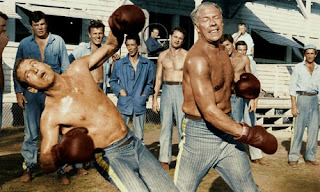 Except that I found very little that was messianic, or Christ-like.  And being a Jesus-student, I should know.  (Spoilers ahead)  Sure, Luke dies at the end.  He becomes a sign of deliverance.  He is unfairly treated and unfairly sentenced to death.  So those are elements.

But Luke isn’t a man seeking to save anyone.  He doesn’t even think he can save himself.  From the very beginning of the film, he felt he was destined to go nowhere.  Not because he needed to be anyone’s sacrifice.  I would say that Luke would claim that no one needed a sacrifice to be who they are.  Luke’s mother wasn’t particularly holy or heavenly-minded.  Rather, she is one of the most down to earth folks you’d ever meet.  And she isn’t there to hold her son after his death.  It is her death that sparks the events that flame into Luke’s demise.

The original idea behind the old English term, “go-spel” is “good news” which is a direct translation of the Greek word “eu-angel-eo” which means “good message”.  The Greek word in the Roman era was a message of a victory or a message to a slave or prisoner about their freedom.  And Luke is one who lived out his message, who proclaimed his gospel to every prisoner that could see it, without words:

Every prisoner is already free.

Throughout this tale, Luke refused to be commanded, restricted or beaten into submission.  When he was locked in the box, he was free.  When he was bullied, he already had a plan to bring the bully down.  When he was beaten, he would choose to accept the beating, again and again, because no one could limit his freedom.  If he was in a place, he assumed he chose to be there.  He wouldn’t let anyone—not the warden, not the guards, not even God—tell him what to do.  He went when he wanted to go.  He stayed because it pleased him to do so.  And he never lost his freedom because, ultimately he had no fear, not even of death.   Because the one who does not fear death is slave to no one.

This is not a religious message, exactly.  But it is a gospel.  It is a proclamation of good news, of freedom for all.  Luke is a kind of a Messiah, but only in that he showed the way, much like Buddha did.  And his disciples told his story and proclaimed his message of freedom for those who needed to hear it.

This is not the message of Jesus.  Nor is it the life of Jesus.  Any similarities to other religions are just signs at how seriously the author and filmmakers wanted us to take this story.
Posted by Steve Kimes at 6:53 PM