I believe that Mike Leigh is the greatest chronicler of modern humanity.   His films are snapshots of a community, with a fly-on-the-wall sensibility that are more real, and gives more personality and reality than almost any documentary I’ve seen.  Even though a film might surround a single character or two, it is never “the story” of that character.  Rather, we see not only that person, but those who surround that character and the community they live in, and every character is fully developed.  With every person we see the central character interact with, not only do we have a richer idea of that person, but we have a better grasp of the community.  In the end, the community has its own life, which has a central person but it isn’t all about that one person. 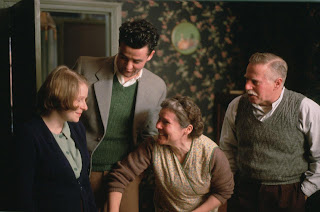 Vera Drake could easily have been an issue film.  Vera Drake is a grandmother-type who, out of the kindness of her heart, provides abortions for women who otherwise could not obtain abortions.   But she isn’t made either a saint or a demon, as one side or another of the abortion debate might make her.  Rather, she is a simple, kind woman who we see fade as the film goes on.  We see a series of events, which were inevitable, if either we or Vera had given a bit of thought about it.  But we hadn’t, so the film feels a bit tragic.

But wisely, Leigh doesn’t focus on the issue.  Rather, he focuses on the people.  Her family, her friends, all of whom depend on her kindness, but are also their own persons.  Leigh’s films are quiet, but brilliant.  Never have I felt so completely introduced to a group of people I could meet around the corner from my house.  Every character is perfectly placed around Vera.  Her husband and her seem perfect together, and it makes sense that she would have the children she has.   This perfectly created community can easily be extended to a couple of his other films: Another Year and Happy Go Lucky.

You may appreciate Leigh’s films or not.  But he has a genius for the human condition that I have never seen before or since.  I can’t wait to see the next one.
Posted by Steve Kimes at 5:47 PM