The Corruption of Democracy: An Analysis of the Dark Knight Trilogy

The way I figure it, if you want to read a review of Christopher Nolan’s conclusion to his epic Batman trilogy, there’s a million places to hear or read one.  Google the title name and “review”.  Plenty of them out there.   This means that I don’t need to tell you that I think that the Dark Knight Rises is a fitting conclusion to the trilogy, that it was entertaining and thought provoking, it made me cry twice (Michael Caine is such a manipulator!), and it completely shocked me twice.  I don’t need to say that it was very entertaining, but not as good as a movie as the second film.  I also don’t need to confess my opinion that The Dark Knight Trilogy is, in my opinion, the best superhero… heck, the best genre trilogy ever (yes, I think better than LOTR and Star Wars).   See?  Completely unnecessary to say all that.

But I think I do have substantial proof that Christopher and Jonathan Nolan will not direct/write another Batman film.  Why do I think this?  Well, C. Nolan said it himself, so that might be enough, but I think the final evidence is in the films.  Not the plot.  Heck, the plot certainly leaves a number of options for follow-up  Dark Knight films.   Anyone could return and the dark Gotham has a million stories.  The reason C. Nolan will have to hang up the mask and cape is because of the themes.

There are a number of themes in the Dark Knight films: the limit of personal sacrifice for a people;  lies for others’ good;  killing v. locking up evil people; and the morality of hope.  These themes are explored throughout the DK films.  And that’s the point: all of these themes resurface in the final film.  Misters Nolan have nothing new to say.  The plot is great and inventive and well executed.  But C. Nolan is a director that likes ideas, to play with them and explore them in the midst of an intense plot.  They have run out of themes to play with.  Even in this last film, they were only underlying themes they already explored in the first two films.

I could write at least a paragraph on each of these themes I mentioned above and a couple others.  But what I’d like to do instead is to focus on one theme and explore that idea, rather than giving a survey.  This theme is the corruption of society.

I think it is pretty obvious that Gotham is just a stand-in for New York City.  Sometimes I think Gary Oldman accidently says New York instead of Gotham (that’s probably my imagination).  It is a dark place, full of corruption and lies.  It is The Wire’s Baltimore, but it isn’t just morally dark, it is physically dark.  There are shadows everywhere, criminals in hiding, politicians and police officers openly corrupt.  It begins a little better at the start of DKR, but only because the city is founded on lies.  Even when good, the city is evil.

Why is this?  The answer that is given by every villain in the DK series is that the population is evil, corrupt.  The city as a whole is an evil entity, and no matter how you look at it, or help it, or sacrifice for it—even if it changes for a while—in the end, the darkness and corruption returns.  The people are just evil.

I think that this critique is not only for Gotham, not only for a large city, but ultimately it is a critique of the United States and of democracy itself.   Because although it is “this people” who are corrupt, really Gotham represents the whole of urban America.  Each city has, at one time or another, the same problems as Gotham.  Does it really matter if we are talking about New York or Los Angeles or Miami or Portland or Denver or New Orleans when we speak about police on the take, lying politicians, a powerful criminal underground, and mob violence.  To speak of Gotham is to speak of the United States. 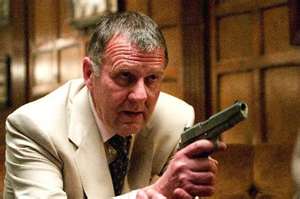 In the first film, this idea of the corruption of the city is a given.  We see how criminal lords run the city and how easy it is for the violently mentally ill to take over a large section of the city.  The villain, Ra’s al Ghul can openly speak of the corruption of the city as unquestionable, and Bruce Wayne cannot disagree with it: he only disagrees with the response to such corruption.  Ra’s believes that such evil is unredeemable, and must be destroyed.  He “proves” this theory by drug-induced panic, which cause riots and violence.  Bruce thinks that the criminal element can be controlled, given the right motivation: fear.  By the end of the film Ra’s is defeated and Batman is given an opportunity to enact his theory.

In The Dark Knight, this theme is revisited, but the assurance of the Joker that all societies are just violent anarchies waiting to happen must be proven, not just stated.  Under Batman’s influence, the criminal element is somewhat controlled and there is legal hope for justice in the city under the leadership of the prosecutor Harvey Dent.  Joker’s plan is threefold: corrupt Batman, corrupt Harvey Dent and prove the hateful nature of the urban American.     Batman is, of course, proven incorruptible, Dent is corrupted, but it takes a huge effort for this to happen.

The ultimate experiment of the populace is the ferry experiment, a version of a Game Theory experiment, the prisoner's dilemma. .  Joker has two ferries, one full of criminals and the other full of normal citizens and each are loaded with explosives which can be ignited from a distance.  The Joker announces that the detonator for the other ferry is on the other ferry.  They must kill the people on the other ferry, or else both ferries will blow up at midnight.  One would expect the criminals to be selfish and so quickly decide to blow the other ferry up.  And the normal citizens, deciding that the criminals were worthless would decide the same.  Instead, each boat decides to not destroy the other.   This surprises the Joker, but it doesn’t keep him from attempting to create general chaos in the city.

In the final film, a similar assumption is made by Bane—people are evil and if you give them an opportunity, they will hate and destroy each other.  Bane’s experiment is to isolate Gotham, and give it three months of mob rule, mob justice, all under the threat of a nuclear explosion which will destroy the city.  Like the first movie, the experiment proves the point to the villains, because mob rule kills the innocent and releases the guilty.  But it is Bane himself who established this unnatural situation.  He appointed a madman as judge, he released all proven criminals into the street and caused the panic by having the nuclear weapon driven through the streets.

What is the judgment of the films?  Is anarchy the natural state of the urban American?  Is democracy really just forced upon the people, a con game that hides the dark side of the populace?

There are two answers the films give:

First, people, in their natural state, are not violent or anarchic.  The ferry experiment proves this.  Although the Joker was psychotic and murderous, his experiment was  a fair judge of human nature at its worst.  Even though the felons and the citizens had the opportunity to kill each other for their own preservation, and even though the results were close, in the end the decision not to kill the other was made.  In the other two experiments, the populace were given unfair circumstances to determine their reactions.  Yes, the mob ruled in the first and third films for a time, but only because the mob was inherent in the situation of the experiment: the first through drug-induced panic and the third through the release of the violent and the imprisoning of the police, which created a might-makes-right style of leadership.
But that isn’t the complete answer in the films.  After all, Gotham clearly began as corrupt and evil.  By the beginning of the third film Gotham was a just city, but it wasn’t this way on its own.  How is corruption avoided and people are able to live well in urban America?  According to the films, there are four elements that are required to avoid mob rule:

1.       Strong, moral leadership—Commissioner Gordon and the uncorrupted Harvey Dent are the primary examples of this in the film.  They are moral leaders, but neither are pushovers, either.  They have to be strong against crime, but open to mercy.

2.       The violent imprisoned--  In the first and third films, all hell broke loose because the uncontrolled violent were released to the streets, free to do as they please.  The Dent Law imprisoned these people and Gotham had their best period.

3.       Sacrificial heroes—The primary example of this is Batman, but he is not alone.  Gordon, Lucius Fox, Rachel, Selena and “Robin” all have to make their own sacrifices in order to keep Gotham and peace and to defeat the corrupting influences.  Harvey Dent was morally upright, but he failed in the area of sacrifice.  Moral leadership is not sufficient in itself—heroes who are willing to sacrifice everything for the people are necessary.

4.       Hope at any cost—People in general are good, but not in a panic, nor in the face of open violence.  Most people will roll over and allow corruption to rule unless there is hope for change, hope for the good to prevail.  This hope may be based on a lie, it may be a corruption of the truth, but if people are to keep civilization going, hope must prevail.

Isn’t it interesting, then, that in the end the Nolans agree with the Founding Fathers of the United States: religion is necessary for the ruling of the people.  For these three elements: moral leadership, sacrificial heroes and hope (even if a lie) is exactly what religion provides.  The Batman/Harvey Dent mythos was a kind of religion for Gotham, a version of the truth that gives them hope and allows the moral to rule.  Are the Nolans saying that without some kind of mythos the DK villians were actually right?  People are corrupt unless the right mythos guides them, teaching them, guiding them to trust the right leaders, granting at least the hope that security and peace is right around the corner.  Hmmm.

Postscript:  In listening to many discussions about the last film (which I only do after writing my own take), I found out that Gotham City resembles different cities in each of the three films.  The first is New York City, the second Chicago and the third Pittsburgh.  Another brilliant move by the Nolans, and confirming my idea that Gotham is really just an every-city, at least in the U.S.
Posted by Steve Kimes at 7:30 PM