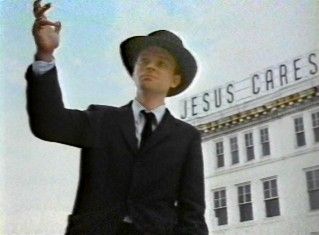 I have not read the novel on which this film was based, but I have read enough Flannery O’Connor to know that it represents her literature well.

The film is about religion.  Not about spirituality, but religion—with its contradictions, misunderstandings and rough-and-tumble viewpoint.  It is about the South.  The small town, the small city, the polite veneer, the prejudices mixed with pride.

It is about simple people.  Not one-note characters, but people who struggle with life because they haven’t thought everything through, because they haven’t got enough control over themselves to really assist others.   You have our main character, Hazel, whose anger against God and demands that he be redeemed warp his sense of reality.  You have the blind preacher who isn’t really blind and doesn’t really believe in the tracts he hands out.  You have his daughter who knows she needs a man to survive and only knows one way to get him.  You have the landlady whose greatest desire is to help someone in need, which becomes her desperate need.  And you have the huckster, who knows a good con when he sees one, even if the one perpetuating it is desperately sincere.

And finally, there is the ugly aspects of Flannery O’Connor’s works.  In an essay I read of hers, she speaks of the Southern “necessity” of their literature being “gruesome”.   It is interesting that John Huston has the ugly plot points, but he doesn’t make them visually ugly.  He is not even leading us to imagine the ugly scenes which he has off screen.  It would be a very Christian film, if it were not the fact that the religious themes were so difficult to determine.

Hazel is a man in desperate need of redemption, and he not only rejects Christ, but also the need of redemption itself.  We need not repent, we need no blood, we need no two-thousand year old death to save us, because, Hazel preaches, we need no salvation.  We are complete, we are fit, we are sufficient in and of ourselves.   However, the entire film, ever character, every event shows the lie of this message.

Every person in this film is religious, almost all claim Christ in some way.  Even Hazel, who denies the effectiveness of Christ is haunted by him, sees him in the very fabric of life.  And even though he denies the fact of redemption, he cannot stop thinking about it, talking about it, like an atheist who cannot stop speaking about the existence of God.  It is clear that religion is doing none of these people good.  It is as much a block between them and healing as their own desperate clutching of their needs.

There are two questions that stay with me at the end of this film.  The first is: given the need of redemption, did anyone find it?  Clearly Hazel goes through a remarkable character arc, in which he learns about his own need, but did his solution, his repentance really cause his redemption?  Or was his self-mutilation and self-denial just another way of taking advantage of others?

The other question is one that Huston and the writers struggled with: Does Christ win, in the end?  The screenwriters opined that he did, but it isn’t clear that Huston agreed.  Perhaps Christ won in the sense that Hazel, and most of the rest of the characters, recognized the need for redemption by the end of the film.  But if Christ is about redeeming people, not just making them want redemption, then not a single soul was saved in this film.  All are left in as much agony as they began—some more so.

I’d say that Christ, just like everyone else in this film, lost.

However, to see this struggle, to pose questions that otherwise could not be posed, to open our eyes to the struggle of redemption that is happening all around us—for these reasons and more I’d say that this film is more than worthwhile watching.
Posted by Steve Kimes at 7:19 PM