The Theology of Life of Pi

The most recent Ang Lee film, Life of Pi, is easily the most beautiful film of 2012.  I really enjoyed my time with it, as did my two daughters who watched it with me (since you asked, 12 and 16).  It is a simple tale, but wonderfully told and engaging.  I encourage you to see it.  4/5

There.  Now the review portion of this post is done.

But I have been asked a few times concerning my opinion about the religious themes of the film.  This makes sense, since the point of the film is a religious one and I am a pastor.  So I ought to have an opinion, right?  Well, I do.  I’ll try to be unpastorlike and keep it brief. 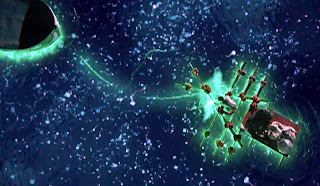 I have found five theological statements this movie makes.  Let me summarize them:
1. God, as a powerful being, exists
2. God has something to say
3. God speaks through stories
4. God speaks through a variety of stories, sometimes contradictory
5. God is less concerned about truth than communication

The first three points are in full agreement with Christianity, as well as Judaism, Islam and Hinduism.  Other religions, such as Buddhism, thinks that what a god might say isn’t as important as enlightened humans.  But few religious people should have a problem with these first three.

The fourth principle is a problem with certain orthodox believers and certainly fundamentalists.  They hold that God is completely contradiction-free and there is a logic and consistency in God’s communication.  If God gives us a narrative, it a cohesive narrative.  And if there is contradiction, it must mean that part of the narrative is not of God.

The final principle speaks directly against the fundamentalist point of view, because that point is all about the one truth.

What I want to point out is that the movie doesn’t disagree that there could very well be one truth.  What it actually questions is whether the direct communication of that truth is the best way to create a world.  People don't always handle truth well.  Jesus spoke truth, and it wasn’t received well at all, and so he spoke in parables which were not understood, but people then just scratched their heads or came to Jesus and asked.  Indirect truth seems to have done work equally well.

If God’s perspective is to bring people to a certain place—let’s say to train people to love, or to prepare them for eternal life—and truth isn’t the best way to bring people to that place, would God be so restrictive as to not give a narrative that might be more flexible with statistics?  Must every jot and tittle be historically, scientifically, measurably accurate?  Or can the details be fudged in order to bring people to the place where He wants them to be?

I am not saying God has done that.  Nor is the film.  It is just a question, a thought, to put us in the mindset of God and to possibly not be so narrow minded about our “truths” we hold dear.  After all, it could be that we have a stranglehold on a “truth” that has been colored, let’s say.  And that would be very embarrassing when we found out the real truth.

For me, it is more important to find out the direction God wants us to move than to find out the details of all that He has done in the past.  The stories are clues and the principles we are given are directions.  But it is up to our relationship with God here and now to determine what it means.

Important visual commentary by Kilgore and his daughters: