An Empty Face That Reflects Our Souls: The House Is Black

This review is on The House is Black, a 1963 documentary about a leper colony in Iran. I would recommend that you watch the film before you read the review. It's only twenty minutes and you can watch it here: The House Is Black

This twenty minute documentary is the only film made by female poet Forough Farrokhzad. And this twenty minutes of film changed Iranian cinema. There's not much to it. It's pretty spare. It is in black and white, at times completely black. It has almost no music, and no dialogue. You almost never hear a subject talking, for most of the speech is a voice over (usually the director) reading a text from Psalm 139, or the Qur'an, or the book of Job. Yet this isn't a particularly religious film. And it certainly isn't entertaining. Yet it is compelling, necessary cinema.

It is a movie that focuses on a leprosy colony in Iran, showing us the inhabitants as they live their daily lives. They are in school, feeding each other, even on a wedding march. Yet the opening warns us that we will be shocked and even appaled. Why? Because leprosy eats the flesh, and these people are worn away. The most shocking sight I saw was of one person whose whole face is worn smooth. The opening tells us that is is simple ugliness that will offend our sensibilities. And, to a degree the director is right. But I can't help but think, is my pity or sorrow toward their ugliness any better than disgust, horror or shame. But that is not the focus of the film.

The message of the film is this: leprosy is a horror and it can be stopped. The fact of the matter is, for the most part, is has been. Since 1963 leprosariums have been successful in arresting leprosy almost from the time it is detected. At times people lose parts of their body, but lepers are not in as critical a condition as they were in 1963. However, the medical ability was there in 1963 to stop leprosy. The only thing that lacked was the will and organization to do something about it.

Even so, I would say that the message of the film to us today has little to do with leprosy per se. It has to do with the fact that compassion and organization can change the world. We can arrest AIDS all over the world, if we have the will. We can offer clean water to everyone in the world, if we so desired. We could end the debilitating nature of homelessness. All we need is the compassion and organization. Something could be done.

The film is spare, yet deep. It looks at the world as starkly as the Hindi film Pyassa-- the poet expressing sorrow over injustice, poverty and our own insensitivity. And yet that very expression of the poet's compassion is beautiful and even magical. From the midst of ugliness comes the beauty of the heart.

A film like this shames us-- even forces us-- to look at the sorrows of the world and makes us see the humanity, the glory. The boy who answers the teacher's question, "What is ugly?" with "feet, hands, heads" is, himself, beautiful because we can see his joyful innocence behind his scarred, misshapen face. 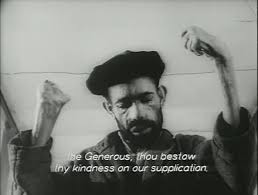 And the texts read over the sights of diseased bodies add another layer. As it often does with religion, the stark suffering of humanity causes the text to seem ironic. "You have formed me as a fetus", "God the Beneficent": Can this hold true? Is God truly to be called benevolent in the face of human innocents dejected and brought low? Yes. For the beginning of the film reminds us: It is within human capacity to meet this need. The only thing that prevents the need being fulfilled is not divine, but human, apathy.

I can see this film could be a game-changer. It didn't really show me anything new, but the arrangement of the pieces was startling and magnificent.
Posted by Steve Kimes at 9:50 PM