Just Some More Gushing About To Kill A Mockingbird


I read Harper Lee’s book for high school. They gave us a semester to read it (wimps!) and I inhaled it over a weekend. A couple of years later I saw the film. At the time, it was the only film I had watched that not only captured the book, but it was great even alongside such a great novel. I am happy to report that my more recent viewing of the film with Mercy (aka Ideathy) was an equally joyful experience.

Technical—5/5—As perfect as a film could be in 1962. And they could make pretty perfect films then. Everything was top notch, from the script to the acting to the camera work, to the pacing—simply perfect.

Interest—5/5—This story reaches my inner mythos. There isn’t a scene the film couldn’t do without. Every line is just right.

Tension—5/5—Yes, I know exactly what is going to happen. I've seen it before, you know. But I was still tense and weepy before the verdict is given. I still can barely watch what is happening in the woods. This is one of the more amazing things watching this film with Mercy (who is 10, in case you didn’t know). The scenes that were tense for her were completely different. When Scout was about to knock on the Radley house, Mercy turned her eyes and would have refused to watch any more. She was listening to the cues of the music and was completely empathizing with Scout. In the scene in the woods near the end of the film, Scout was in confusion, she couldn’t see a thing—and neither could we—and there wasn’t any music to tell us what to feel. As an adult, I knew what was happening and I was scared. That was the scene I couldn’t watch. But Mercy was fine, no tension at all. That is one of the ways I knew what a masterpiece this film was. It communicated to both me and my ten year old, but in different ways, at different times. Amazing. Simply amazing.

Characters—5/5—When I watched this film as a teen I already knew that I wanted to be Gregory Peck as a father. I wanted to be that respected person in the community, the wise person who helped out those in need. I wanted to be there for my kids, proving that I could both defend them and teach them that they need not harm others. Mind you, I am not Gregory Peck. Who could be? Even Gregory Peck wasn’t Atticus Finch, I’m sure. But I know for a fact that Atticus was my goal for fatherhood. If I could be ten percent Atticus, I’d feel successful. 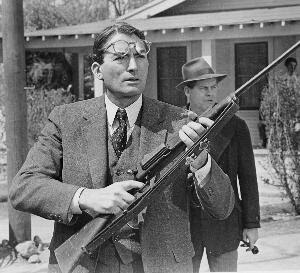 Mind you, all the other characters are great. Robert Duvall in his first performance. Mary Badham as Scout was perfect. The Sheriff and Mizz Crawford were excellent. But I will never forget Atticus as long as I exist.

Theme—5/5—Both the principle of not harming the helpless and how to act when one’s own community insists upon doing so. It is a good year for me to watch this, really, as in my real life I am struggling against a city that is willing to make any excuse to allow the homeless to suffer with hypothermia.

Ethics—5/5—This is one of the most powerful sermons ever preached on film. It is like Jesus on film, better than any gospel presentation ever in cinema. 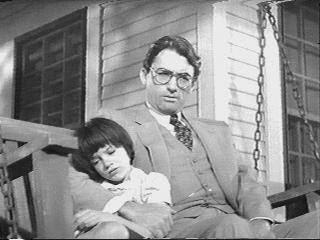 Yes, this is a perfect film and one of my personal favorites. It’s goin’ up there. Way up. Just as a personal note, this is only the second film I've given all 5s in every category. The other one, interestingly enough, is Rachel Getting Married. However, RGM didn't get rated as high on my top 100 list. Even so, although Nausicaa and In America didn't get as high of individual ratings, they were placed higher in my top 100. Go figure.
Posted by Steve Kimes at 2:10 PM