There is a Michael Bay film called The Island which was just barely watchable. This isn't it. This is a quiet film of beauty and religious depth. Which I recommend to anyone who wants to go deeper with God, or who wants to experience great cinema.

Father Anatoli, a Russian Orthodox monk, knows just how deep his sins can penetrate, how dark they really are. He, unlike most, has no choice but to know just how evil he could be. He acted the coward, and at the command of Nazis, he shot his comrade and commanding officer. Now, in 1976, he plays the saint, but he knows he is no saint. He is rather a prankster, a common man who spends time with common people, or alone with his pile of coal.

Off and on there a man named Yohan comes to my congregation. I am sure that he considers himself a part of our church even though he only comes a few times a year. He sends us his tithes and he mails to me articles the he thinks I might be able to use. However, his messages to me are so coded and so confusing that I can rarely use what he sends me.

As I say, he only visits occasionally, but when he does, it is often a trial. He comes late and insists upon staying late, sometimes long after we are ready to go. He often teases me, but these teasings have a bite. He speaks of my deep sins and of how my wife must bear with much to remain with me. He jokes about my unworthiness. Sometimes I tease him back, but at the same time, I know that he is only joking on the surface. There is a real point he is making. In my life, his task is to poke holes in my pride, of which I have much. He is my prankster, my personal prophet, to remind me of my sins. Even him showing up late is to remind me that I am too focused on time and its constraints and not enough on my people who do not tie themselves as much to the hand of the clock as I.

In the past, I have seen myself as a saint, but my weaknesses and failings have piled up too high for even me to not notice. Yes, I am often the prankster, the prophet to many churches and to many individuals who think of themselves more highly than they ought. But I desperately need my prankster as well. I need to know that I am just as weak and faithless as anyone else.

I don't say this out of some self-loathing, or out of some religious duty. It is simply a fact. And I would always have known this were I not comparing myself to those who have fallen farther, or if I would not lie to myself so much, comparing myself favorably to my betters. 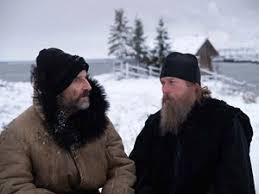 Sometimes I am Father Anatoli, but more often than not I am Father Filaret. I am sometimes amused by Anatoli's antics and sometimes irritated. But when he pokes at me, when I am the object of his scorn, I could become angered or feared, or I could just sit next to him, recognize that I need the reminder that I am very human, and thank him for his presumption.

This is a beautiful film, full of depth and power. It reminds me of Spring, Summer, Fall, Winter... and Spring with the conjunction of the holy and the common. It is brilliantly shot, perfectly acted and a great film reminding us of the best of the insanity of the God-touched. 4.5/5
Posted by Steve Kimes at 11:45 PM