Scenes from Scenes From a Marriage

I knew I was caught by the time Ullmann started rejecting Josephson’s  sexual advances.  The characters added another layer, right there.  Although it was suspected that they were lying to their friends, it is at this moment that we know that they are lying to themselves, deluded that they are in a happy marriage, when their real desires in a relationship are openly uncommunicated.

How different from other Bergman films I experienced.  I saw my first Ingmar Bergman film in high school with Fanny and Alexander in a theatre.  I was supposed to like it, so I said it was good, but I didn’t really get it.  It wasn’t until my second viewing of the film that I realized I didn’t have a clue what Bergman was doing or saying here.

I looked forward to The Seventh Seal, for it was about death (I love the metaphysical) and was an “important” film.  It left me cold (like death, get it?).  It was then I realized that Bergman may not be for me.
Then Through a Glass Darkly, then Winter’s Light (half of it).  I understood what was being communicated,  it just wasn’t compelling to me.  Bergman, although he is loved by many, just wasn’t for me.

Scene 2: Deliverance
I didn’t give up on Bergman, though.  Why?  Because my fellow film lovers insisted that I just needed to keep trying.  Honestly, I wasn’t looking forward to another dull, mystifying journey.

It wasn’t until Wild Strawberries that I finally gained a spark of interest for Bergman’s films.  Spark?  I loved this film of a man reflecting back on a life of distance and wondering what he was leaving behind.  I had been impressed with other performances (Harriet Andersson in Through a Glass Darkly especially), but Wild Strawberries was just stunning.

But was Wild Strawberries just a fluke?  Clearly Scenes From a Marriage indicates not.

Scene 3: Dialogue Reigns
The structure of Marriage is in six “scenes”,  each revealing (to us and themselves) a different aspect of the central couple’s relationship, and thus changing the relationship.  The method is dialogue, which has always been a favorite method of communicating ideas for me.

I wonder if we realize how much of the drama of our lives—and the pleasure and the comfort—takes place in simple conversation, especially with those we love and respect?  Conversation changes us and so changes the reality we live in.  Our whole world can powerfully shift because of a sentence.  A well-placed word can cause us to spiral into depression or to dance with joy.  To converse is to be surrounded with life.

To converse is to relate.  And the most intimate, the most vulnerable, the most mystifying relationship is that of a marriage.  Most people marry.  There are billions of marriages.  Yet every marriage is mostly a mystery.  Each is unique.  As humans we are clearly driven to marry—it crosses all religions and almost all cultures.  But since every human is a complex of personalities and drives and contradictory emotions, each marriage is as much a collision of two societies as it is the joining of two people.

And so it is quite possible—even likely—that a couple, married for ten years, still are confused and bumbling about their relationship.   In this unification of souls, the souls in question shift and morph.  If the souls change, can the marriage remain the same?  Of course not.  One soul is changed by close proximity to another, and so the very relationship between the souls shift and so both souls change again.

So marriage cannot be seen as an entity as much as a shape-shifting organism, forced to be completely different or to die.  And this is not the story of a relationship that can change.  It does change, but only through internal struggle and brokenness. 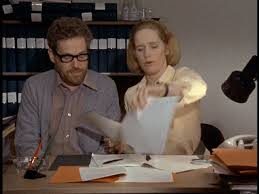 Scene 5: Partner in the Dance

(Warning: This section has spoilers)
The marriage is broken upon two solid features of the soul’s personalities: Marianne’s need to please others and Johan’s need/desire for more sex than Marianne is comfortable to give.  In their marriage they only drop hints as to the need to change and when it finally is communicated, it is too late for the marriage.  The marriage unravels, dissolves, almost in a single night.

And the film insists that it must be so, for while they were in that marriage they could not change or become the different people they need to be to make the marriage work.  Only when they are out of the marriage, married to others, have they grown enough to be the people that they needed and deserves.

And by this time are they addicted to adultery?  Do they see each other, their former partnership, as a release from their current bonds, or do they see each other as the match they should have had from the start?  The violence and expression of hatred in the penultimate scene seemed insignificant compared to their need of each other in the final scene.   How can anyone love after such a scene?  Is it love for each other that blinds them to that night, or simple, driving need?  Or is it that they are the true couple, the eternal couple that will not ever completely be apart because they were joined by a purpose that cannot be gainsaid by human will?

These questions are not answered in the film, and it is in the questions that the film remains so true.  Because every enduring erotic relationship truly is a mystery.  I would love to have every new couple watch this film.  Not to tell them that their relationship is pointless, surely to end in agony.  Actually, my wife and I have been married for 23 years and we are content with each other.  If there is one secret to our marriage, it is because we chose to make every life change together.  The changes always came, but we are committed to face change by each of us changing, so changing our relationship.

No, I would want newlyweds to see this film to tell them that they need to communicate.  That they need to navigate the waters together as a school of fish, each swimming individually in unison.  That they need to see their spouse not as the answer to their needs, nor as the canvas for their imagination, but as a partner in the freestyle dance we call life.  That the partnership only ends when one or both decides that it does.  And even then, like many dances, the partnership is never truly dissolved.  The intimate touch of another’s soul never goes away.