A Life With A Clockwork Orange

I was an older teen when I first watched A Clockwork Orange.  That isn’t a surprise, since it seems many people watch this controversial film at about that age.  The age when we are old enough to watch a movie on our own without our parent’s supervision.  A Clockwork Orange seems to be one of the first go-to films for kids of that age.  We hear rumors of the violence, the graphic nature of it, and it’s classic status.

I know that some, when they catch up with it, find it a moving experience, important.  For me, frankly, I found it disturbing and… well… I don’t know.  It is memorable, that’s for certain.  But what is it about this film that makes so many people find it significant?  I just don’t know.  I couldn’t decide about it.  And that’s where I left it for 27 years or so.

This week I decided to revisit the film.  My wife deeply questions my wisdom about that.  But I was missing something.  As I explained to her, I was so young when I saw it that I can’t really rate it fairly.  (Her response, “And that’s good enough reason to watch it?”  “Of course,” I replied.  A film buff cannot be denied a rating.) But more than that, it’s an important film experience for many people, but I can barely remember a thing.  I wanted to participate in the event with my film buff community. 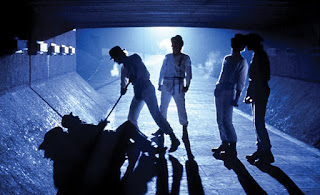 So I watched it and it was as disturbing as I remembered it.  The violence, the dehumanization of women, the sociopathic activity, it was all very distressing.  It made as if to titillate with the sex and violence, but all it did was offend, which I suppose is part of the point.  I certainly did not enjoy the film in any way whatsoever.  It was clearly satiric.  Frankly, it felt like one Monty Python sketch after another, each one more over the top than the one before, but not a one was even remotely funny.  There were times I felt sick to my stomach.

And as my memories came rolling back from almost 30 years ago, I realize that I must have had some level of the same reaction back then, but to a less degree.  The one scene that I remember most clearly from my previous viewing is the scene in the bar where the plastic woman’s nipples are used as a faucet to pour the patron’s drink.  It disgusted me then and disgusts me today.  Frankly, the whole thing does.  This is similar to the film Brazil, when it communicates just how bad society has gone and seems to go too far… but at least Brazil had some laughs to break the oppression on one’s soul.  A Clockwork Orange never does. The mocking of society is penetrating and somewhat remarkable in its insight.  Over the last 40 years since it was made, society has off and on again embraced pornography as an everyday experience, as a regular part of everyday existence.  And the result of this almost always is the objectification of women, especially young women, to just be seen as objects of lust.  Right now, pornography is as popular as ever, but it is kept private, and women are more and more regarded as equal humans.

Another pointed jab is how we allow ourselves to be led by sociopaths.  Those who are willing to use violence or dehumanization to bully and force their way through both small groups and society at large is still a fact of life.  It is interesting that often today we see the conservatives, who demand an “eye for an eye” to be the bullies, but in this film it is the liberals, those who want to rehabilitate rather than just punish criminals, who are guilty of the greatest depth of dehumanization—by denying freedom altogether.  Not only the freedom to commit crimes, but the freedom to appreciate art as well.  In the end, our “hero” is granted an opportunity to partner with the government.  It looks like he will go far, because he is of the same type. 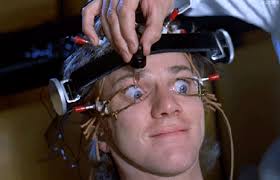 Our society reflects the world of A Clockwork Orange in the lack of ethical thinking.  What is essential is the outcome, not the process.  As long as all the policies are followed, and the outcome is what is accepted, then all is well, and we can enact crimes to produce that outcome.  It is fascinating to me that there are only two ethical thinkers in the film: The Chief Guard and the new roommate.  While they seem cruel at points, at least they had an ethical theory.

One of my issues of the film is that it, like many satires, can point out the wrong in thinking, but can it determine the right?  Simple “eye for eye” punishment isn’t exactly a well-thought out ethical theory as well. But in the end, considering all these things, I realize that when I watched this film when I was young, the plot didn’t stick, nor did many of the scenes.  But what did stick with me was the disgust at the misogyny and the violence.  I couldn’t determine my reaction to the film because the primary emotional response was revulsion, and while I knew there was something else going on there, I couldn’t process what it was.

Now I can.  And I think that disgust and unfunny satire isn’t enough to base a great movie on, at least for me.  I nod at the bold moviemaking.  And I am glad to have had the experience of revulsion at the dehumanization of women when I was young.  But I cannot recommend this film, as noble as its intentions may seem.
Posted by Steve Kimes at 7:04 PM