The Fly: A Spoilerific Analysis

This whole review is pretty much one big spoiler.  If your stomach isn't weak, go, watch The Fly (1986), and then come back and read this.

On the surface, The Fly is a pretty common 80’s horror flick.  The acting is pretty spotty (but Jeff   Goldbloom is great), the makeup is pretty awful (by the artist of the campy Gremlins), there are some supremely unbelievable actions by some characters (you go to the monster’s lair and THEN you put the gun together?), and an overuse of dry ice fog.  Still, it is a remarkably intense film, which I’m glad I had not seen in the theatre, because some of the scenes make me sick to my stomach as it was.

In the end, though, I was left with the thought:  What is this film really about, anyway?  Okay, it’s about a scientist who isn’t careful with his experiment and ends up transforming himself into a fly, much the same as the classic 50’s horror flick of the same name (with the wonderful Vincent Prince).   But all the talk of “flesh” and “insect politics”… is that really the product of the typical genre film?  Of course not.  David Cronenburg is famous for his films about flesh, and there is clearly a deeper message intended.  It is interesting that Cronenburg received the original script from Charles Edward Pogue, which had many  of the same elements of the finished film, but Cronenburg asked permission to re-write the script, and he did so, imposing his own philosophy and intent upon the film, making more than simply horror.  I have never seen a Cronenburg film before, so this is my first exploration of his ideas.  But I’d like to explore this, and then I can expand on Cronenburg’s philosophy as I see more of his films.

It seems that The Fly is approaching metaphor similarly to Kafka’s The Metamorphosis.   In the famous novella, Gregor Samsa awakes one morning to find that he had transformed into an enormous cockroach.  But this was not simply a fanciful romp on Kafka’s part, but a metaphor of a man who no longer is going to live according to other people’s expectations.   Even so, the transformation of Brundle isn’t simply a literal gene-splicing, but is a moral transformation of a man.

The transformation can be seen right from the very first scene.  Brundle approaches Veronica, talking about how he will change the world.  It is clear that Brundle is using this as a line, a come-on, and Veronica certainly takes it that way, planning on brushing him off.  Then he makes it clear that he is serious, that he has some serious science going on.  So Veronica pursues the story.  Arriving at his home, he indicates his real intentions by attempting to entertain Veronica, to woo her.  When it is clear she is only interested in his science, he uses that to convince her to spend more time with him.

It is later revealed that Brundle is a serious scientist, not just a hack, and that he’d been working on the project for years.  And given the progress of the experiments, it is clear that he’d been working hard, pretty much focused only on that work, for years.   I think it is clear that in the first scene, Brundle is a man who is ready to make a transformation already.  He had given himself to the intellect, to “changing the world” to make life better for everyone.  That night, the first scene, Brundle had decided that he was going to live for himself, to give himself some pleasure as a reward for his hard work.  Or maybe he was just tired of his lonely life.  But it is clear that he had given himself over to the “flesh” as opposed to the intellect. 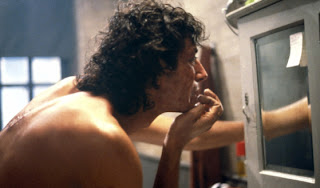 Instead of creating a balanced life between the flesh and other pursuits, he gives himself fully to one mode of life.  Yes, he continues to pursue his experiments, but thought of transforming the world is behind him--  nor does he show any real interest in Veronica except for what he can get out of her.  He has given himself over to his body before the physical transformation began.  The physical transformation into an insect is simply a representation of what he is becoming before the fateful fusion with a fly.

Brundle is a man of the intellect who became a man of the flesh.  He is completely focused on his bodily needs.  When he becomes more and more fly-like, he is not disgusted, but fascinated.  He is the center of his own universe and he sees his changing focuses and body as a change of humanity, instead of his own separation from humanity.   In the end, he is willing to sacrifice Veronica and his own child in order to increase his bodily transformation, to make them both a part of himself.

So what is Cronenberg’s message?   It isn’t the common trope of the scientist looking into what should never be revealed.  Rather, it is about the dangers of giving into the flesh, of going too far into one’s own bodily needs and changes.  To focus only on our flesh is to see ourselves as the epitome of existence,  and ultimately to sacrifice those around us.  We cannot experience love or compassion, but everything and everyone around us is seen as an extension of ourselves, a tool we use to increase our own flesh.  Our needs become the center of the world, and all around us is consumed to be a part of our world.

There are parts of the film that are tough to get through.  And there are many moments in which I was pulled out of the film due to poor directorial decisions.  There were too many moments that just seemed unrealistic.  But intellectually, this is a very satisfying film, and the tension was very real.   I can’t give this film a single rating, so I won’t bother, but I can say that I recommend it.  Unless you have a weak stomach.
Posted by Steve Kimes at 3:00 PM