There is more to Frankenstein than meets the eye.

Originally written as a philosophical horror novel by Mary Shelley—a stunt to impress her friends—it has become a fable, a warning.  The novel spoke of what it takes to be human, and how a thing created by humanity could or could not be counted as human.  The James Whale/Boris Karloff film stated their theme right at the beginning of the film: There are some pursuits that man should never explore, for they remain only in the hand of God.   In a sense, these represent the two most popular themes in which the fiction enters into culture: The recognition of sentience, even if made by human hands; and, the limitations of science.  This has clearly entered into our current discussions on cloning, but also on artificial intelligence, genetics and potential contact with extraterrestrial life.  The ethics of these discussions can be linked to the ethical discussions of either the novel or the film Frankenstein.

This influence is not strictly limited to the English speaking lands, either.  Mocked though it is in some circles, Pokemon: The First Movie owes much to the novel Frankenstein.  MewTwo is a cloning experiment gone array,  with great powers, but out of the control of his creator.   MewTwo determines to use his powers to attack all humanity for their indifference and abuse of his species, Pokemon.   In the end (this is a spoiler, in case you were dying to see this film), he realizes that humanity does have compassion and love for Pokemon and calls off his attack.  Like the monster in the novel, Frankenstein, MewTwo is allowed long, rambling soliloquies.  It is frankly a better and more ethical film than most people give it a chance to be.

The Spanish film, The Spirit of the Beehive, directed by Victor  Erice, wears its influence on its sleeve.   The movie opens with a scene showing the town where the action takes place watching the Whale film Frankenstein.   Erice himself said that the whole film is encapsulated in one scene from that original film, where the monster is throwing flowers in the lake with a little girl.  We can see this influence throughout the film, as different characters are seen to be like the monster or similar to the doctor of the Whale film.  The monster from the Whale film even makes an appearance near the end of Spirit. 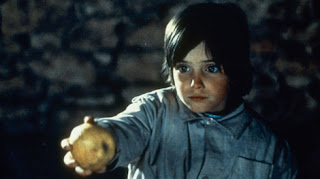 But what Spirit of the Beehive is actually about is difficult to determine.  Clearly it is rich with symbolism.  Symbols of death abound.  Characters wander or pace without much purpose.  There is a rich background, but no explanation given as to the import of the background.  The movie focuses on the little girl, Ana—played marvelously by Ana Torrent—but is the film about her, about her family or about the town?  Or is it about all of us? 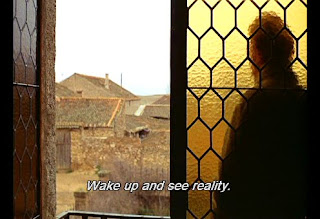 A little bit of study (and watching a documentary on the film supplied by Criterion Collection on their DVD package—thanks again, Criterion!), gives us a better understanding of the film.  I won’t give away any spoilers, here, but I think there is some information that is helpful to understand.  The Spirit of the Beehive was made in 1973, near the end of Franco’s regime in Spain.  The film takes place in 1940, when Franco’s takeover just occurred.  Ana’s family was involved with the leftists, who opposed Franco.  Ana assists a rebel against Franco’s regime.   The listlessness of the parents are due to the fact that they have nothing to work for, as they have no place in the new regime.

Thus, The Spirit of the Beehive is one of the great pieces of art to come from protest of Franco’s actions.  This list includes Hemingway novels, Dali paintings, and, in this millennium, films by Del Toro.  Erice remains symbolic and indirect because he is making this film under Franco’s rule, in Spain.  Like the Russian filmmaker, Andrei Tarkovsky , the censorship he must work under causes him to create works of art that are brilliant and intellectually statisfying the more one watches them.  However, unlike Tarkovsky ,  Erice has created a work of such deep humanity and joy alongside the hidden meanings and despair, that it is a pleasure to watch.  While Tarkovsky is often a towering intellect, The Spirit of the Beehive is not only intellectually satisfying, but is also wonderful film about childhood and the joys and confusion that we all have when children.  It communicates the isolation we can often feel from those we should be closest to.   It connects to all of us. 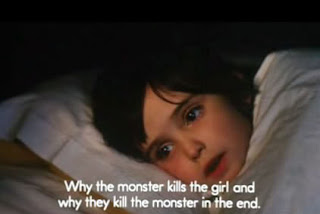 Finally, what does the Spanish Civil War have to do with Frankenstein?  How could Erice and Angel Santos—the writers of the film—have conceived such a connection?  It is found in the answer to Ana’s question after watching the film Frankenstein: “Why did the monster kill the girl?  Why did they kill him?”  The answer is given in the film: When you are separated from your humanity, then the most inhuman acts are accepted.  The Spirit of the Beehive is filled with people who see themselves as separated from humanity as the monster was in the film.  And there have been many regimes that have caused such destruction of people’s souls, thus resulting in the destruction of many bodies.  This film is a protest, not just against Franco, but against any government that limits the humanity of its own citizens.
Posted by Steve Kimes at 1:30 PM