Jiro Dreams of Sushi and I Wish

My family's fascination with Japanese culture probably originates with our joy in watching the films of Miyazaki.  The foreignness of the fantasy is not only because of the fantasy worlds themselves, or the unique beings, but from the deep culture of Japan that infuses them.  Now that my daughters are interested in Japanese anime and one daughter is taking Japanese in school, that fascination has only deepened.

For myself, I am usually spending time in an older Japan, the time of the samurais with Kurosawa (Seven Samurai, Ran), or a spiritual Japan with Miyazaki (Spirited Away, My Neighbor Totoro). Also a Japan of the 50's with Ozu (Floating Weeds). Recently, however, I spent a day in modern Japan, with two films from the last year that opens up many insights of what Japan is now. 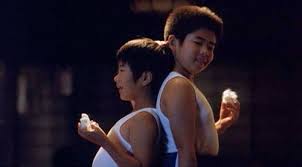 In I Wish, Goichi and Ryu are brothers in grade school who now live quite a distance from each other after their parents split up. Giochi lives with his mother and grandparents in a town underneath a constantly smoking volcano, while Ryu lives with his father, who has a casual life in music.  Goichi hears that if you stand at the place where the bullet trains pass each other, the energy created from the passing allows one to make a wish.  Goichi insists that he and Ryu must meet at the passing and wish for their family to come together again.  Kind of like The Parent Trap with magic.

Of course, there is a lot of planning and difficulties along the way, growth and wonder and friendship and mentors. It is an utterly charming and joyful balance between dreams and reality.  It should be watched if only for the wonderful performance of Oshiro Maeda, (Ryu) who made me smile every time he came on screen. 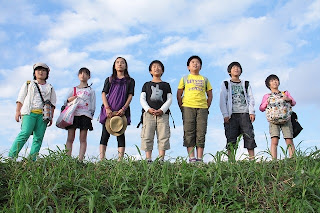 What surprised me in this film is just how similar the children's lives were to the children I knew, or my own childhood.  The friendships, the elaborate but childish plans, wise children and foolish adults, as well as the other way around.  In many films around Japanese children, they are always studying or working (when they aren't having amazing adventures), but these children are playing as often as anything else.  They don't take their schoolwork anymore seriously than American children, and they are just as picky about their food.  On the other hand, they aren't playing video games as often as Americans.  The adults aren't really very different, either.  There is less rigor or work ethic than I would have expected.  And grandparents are the same the world over.

I Wish seems to be a bridge between cultures, pointing out the similarities we all have, especially as children. 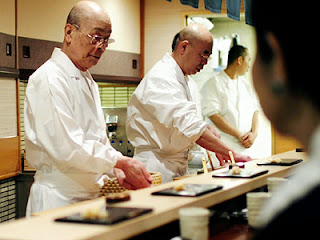 Jiro Dreams of Sushi has another fish to fry, so to speak.  It is a documentary of the greatest sushi chef in Tokyo, possibly the world.  Despite having no bathrooms or other amenities  Jiro's restaurant has received three stars (the highest mark) from the Michelin Guide for years.  This happens because of Jiro's tireless discipline, which he keeps for himself and for his assistants, including his 50 year old son.

One of the most remarkable things about the film is the mixture of cinematography and music.  This film has some of the best montages I've ever seen and the greatest I've ever seen in a documentary.  Even as the sushi is a piece of art, so is this film, a prime example in the art of documentary making.

Jiro is about a continuous vision made reality through perseverance and hard work. His wisdom and his son's wisdom come through in this film, and the contentment with a life they have made their own through difficulty and strength.  The Japan that is presented in this film is a more traditional view: discipline, work, tradition, honor.

Yet in the end, I suspect that these films are only two snapshots of a more complex and diverse Japan than could ever be imagined.  Much like the film Yi Yi expresses, both the frustration and the joys of living modern life.  How can I but touch the surface of such a complex culture through film?