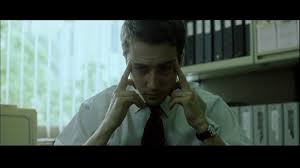 Spoilers here.  If you haven’t seen the film, don’t read this analysis.  Instead, go out and see it.

Edward Norton (nameless in the film) has unwittingly got caught up in a club of revolution.  They use creatively destructive means of communicating the degradation of consumerist society.   They are a militia, and they are about to embark on pulling the rug out from under the entire system by erasing the evidence of all financial records, allowing everyone a financial reboot.  This will both be destructive to society and cause a great opportunity for the unprivileged.  This is deeply disturbing to Edward, because he is the IKEA man, who has a love/hate relationship with consumerism, and because his good friend and roommate, Tyler Durdan is the mastermind of this militia.

What is more disturbing, of course, is when Edward finds out that Tyler is actually one of his own personalities and that he, himself, is the mastermind.  His love/hate relationship with consumer society is what is causing the revolution.  And the fact that is mind is malleable enough to create two separate personalities is what caused this destruction. 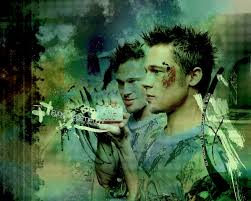 But isn’t that the case of revolution in general?  To cause the destruction of all we knew, doesn’t it take personalities that are twisted in a certain way to destroy what others hold dear?  It is one thing to talk about revolution in a general sense, but to actually purchase the guns and to enforce one’s vision of society on everyone else, isn’t that at least megalomania, if not psychopathology?  In the movie Carlos, about the real life revolutionary Carlos “the Jackel” it displays him as being on the outside, even within his own movement and less effective as he went on.

Of course, we have brilliant people at the head of revolutions as well: George Washington, Che Guevara, Simon Bolivar, Vladimir Lenin.  The fact is, if there is a successful revolution, not only does it require megalomania on the part of a revolutionary, but also a deep societal illness that keeps people degraded and crushed, and piles guilt and punishment on the innocent.   When a revolutionary looks sane, like the best solution to societal ills, then the breakdown of society is complete.

Which is scary when Tyler Durdan or V (as in Vendetta) look more and more reasonable.