It must be awful to be Lona.  Taken by her mother’s lover at a young age while still at school, she is forced into a tragic life situation.  She marries a determined man, who becomes a killer.  The only joys in her life is her daughter and her love, Zhivago.  For the most part, the film is seen through the view of the compassionate doctor, a bourgeoisie poet living in the wrong times.  Although much is made of this love story, it is really a story of survival, of how a man can live in love in a time of demanding justice.

Is Doctor Zhivago a great film?  It is certainly an epic film, covering a generation and massive landscapes and huge themes.  For a film about Russian events and people, it is an extraordinarily British film.  I feel that if we exchanged the Russian Revolution for the rules of Henry VIII and Mary and Elizabeth, we wouldn’t see much difference in plot.  Omar Sharif is a great actor and he is many things, but Russian isn’t one of them.

This film is a marvel to behold.  It is big, so big and it has a landscape that matches that huge scope.  But unlike Lean’s other great epics—Lawrence of Arabia and Bridge Over the River Kwai—the landscape seems to be less integrated into the film.  We have a dramatic scene, then BOOM—giant picture postcard.  We have a quiet scene, then BOOM—another giant picture postcard.   Beautiful postcards.  Sometimes they have to do with the plot.  But they could just as well have been from another film.  Or a gorgeous slide show.  Beautiful, but not especially cinematic.

I enjoyed the film quite a bit, but I’ll have to side with those who say it is a good film, not a great one.

The great love stories are tragedies.  Love leaves one vulnerable, open to both joy and disaster.  And the universe, chaos agent that it is, takes advantage of the vulnerable.  If we are not vulnerable to the dangers of love, then we cannot experience the full joy.  And if there is no joy in love, what good is it?

Love is stronger than death.  Yet we must avoid the love that has death wrapped within it, for we cannot escape either.  When our love is death then death and love wrap themselves around our body and our fate is determined. 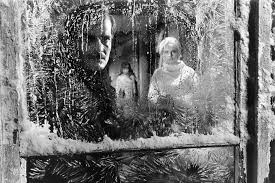 Love is power, and in a man’s world, men hold the power of love.  Women may say they don’t want it, that it destroys them, but the choice of love isn’t theirs.  Men will force love upon them, until it only bears the slightest resemblance of love.  Love, in it’s pure form, sets aside power and grants freedom so that love

Idealism fights against love, even the ideals of peace, of justice.   There is a time to surrender love for justice, when injustice doesn’t allow love to survive, let alone flourish.  But we must remember, the purpose of justice and peace is the freedom to live in love.  Not a love that harms, but a love that builds and grows and flourishes the weakest among us.
Posted by Steve Kimes at 4:48 PM