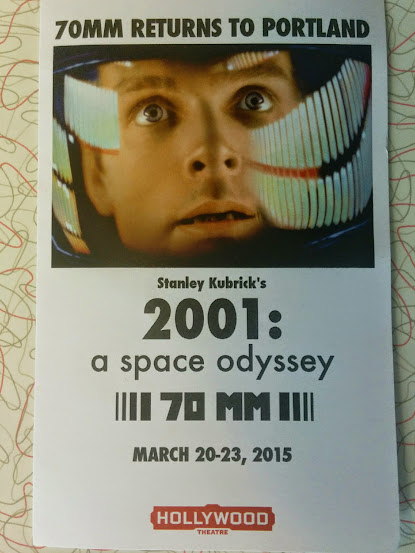 I just had a marvelous experience.

A local theatre just set up a restored 70mm projector and the first film they showed was 2001: A Space Odyssey.  The last time I watched this film was as a teen, thirty years ago, on a small television screen, with me sitting across the room, the volume not too loud so as not to disturb others who lived in the house.  My experience last night was right in front of a huge screen, in front of a speaker, with my twentysomething son and a friend.

Truly unforgettable.   I could imagine being a film viewer in 1968, when the lights dimmed and the 50’s sci fi music mystically settled the audience down, then the room goes black, deadly black, we are in emptiness, the blankness of space and then we see the sunlight display the outline of the earth and the sunrise gives way to moonrise and all three orbs are gloriously magnificent in the midst of space and Zarathustra stirs our soul, in preparation to an epic spectacle.

I may have seen greater films that have been made since this tremendous visual circus, but almost every epic since 1968 has been influenced for the better by this one.  Its greatness cannot be questioned, and it cannot be forgotten.

For all of its importance and power, yet 2001 is a strange duck.  For a long epic film, the narrative is minimal at best and incomprehensible at worst.  Perhaps this is because Stanley Kubrick wanted his viewers to work for the plot, to remain so dazzled that they will examine the film and so piece together the story over time.  But I suspect that isn’t the case.

Kubrick wrote the story and screenplay with Arthur C. Clarke, one of the greatest science fiction writers of the twentieth century.  They based the story on Clarke’s novella, The Sentinel, but they worked so closely on this project that while Kubrick was creating the film, Clarke was writing the novel, and the two works of art really should be seen as two aspects of a single work, different mediums working together, where one isn’t complete without the other.   Only the film’s outline is comprehensible without the novel, and the power of the story is lost without the film’s visuals and music.

This is an unusual relationship between a novel and film.  Perhaps only George Lucas’ original Star Wars film and book has anything similar, in which the novel fills out the film and the film empowers the novel.  I have deep questions that one was ever supposed to understand the meaning of the film without the novel.  Although my son, in his first viewing of the film, was able to glean the basic outline of the meaning of the film, only aided by hundreds of movies, tv shows, video games and novels that have been influenced by this work of art.

Yet there are many who are baffled by this film.  And who wants to read the sci fi novel?  So I will give you the basic elements of the film, and in about 15 minutes you can sound as good as anyone else who has guesses as to what the film is about.  It’s been about 25 years since I read 2001 and about that long since I read the first sequel, 2010, but I remember it well enough to have a coherent idea of the film.  I will present the basic foundation of the film, the purpose of many scenes and some guesses of my own. As usual, I am open to any comments or corrections of my analysis. 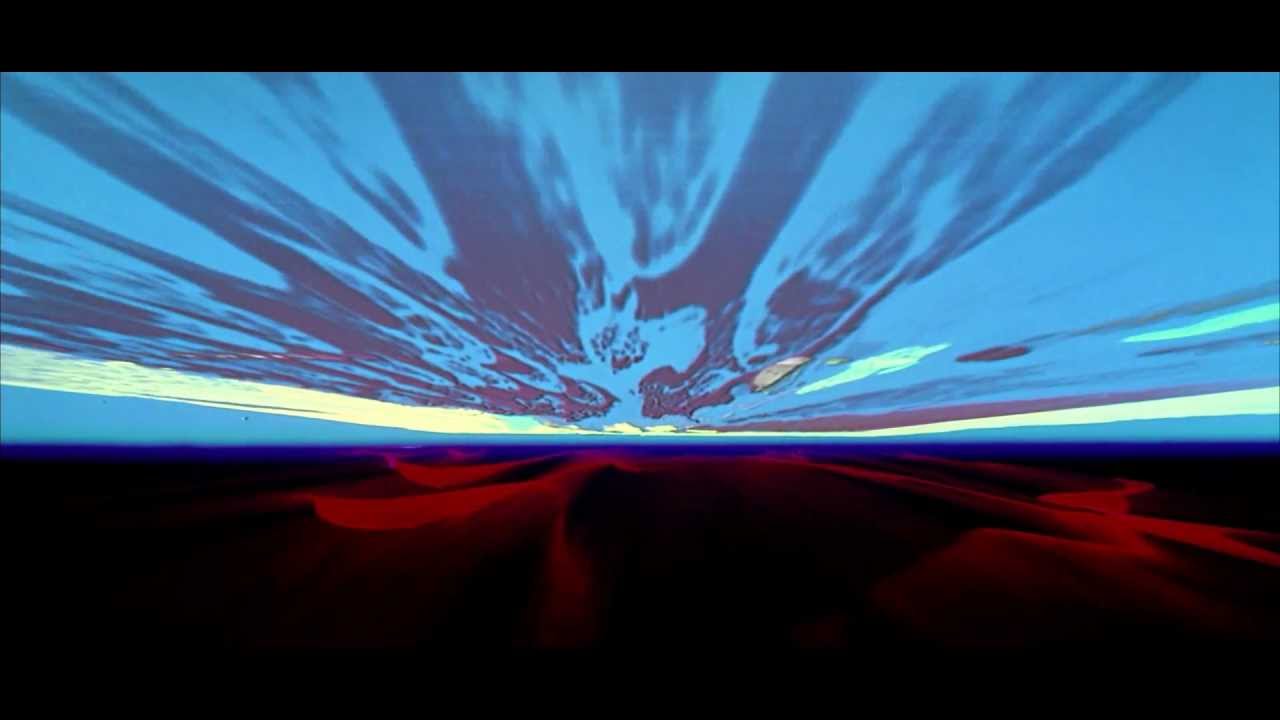 Main plot
Incredibly advanced aliens direct the evolution of humanity, from the dawn of man to humanity’s next step, the Star Child.

Main subplot
Humans and their tools battle for rule of the solar system.

The primary cycle
Humanity is in a restless peace.  Humanity is always seeking more power, more security, more of the universe they can see and comprehend, but they are at their limit. The elegance and peace of humanity is represented by Johann Strauss’ Blue Danube.   A black monolith appears, and the voices of Requiem by  Gyorgy Ligeti,  call humanity, disturbing the peace with a mystical communication of knowledge that will take them to the next level.  A human touches the monolith, to the theme of Thus Spake Zarathustra and the communication is completed—humanity then has knowledge of the path of the next level they must pursue.  They will achieve the next level of evolution only through power and domination, as Friedrich Nietzsche stated (who inspired the piece Zarathustra).

Introduction I
With the theme of Zarathustra playing, we are introduced to the line of communication from the heavens, including the sun, the moon, to the earth.

The Dawn of Man

Introduction II
The tool of a bone shifts to the tool of a space-plane in 2001, where tools now are so complex and huge that they encompass humanity.  This harmony between tools and humanity are highlighted by elegant flight and the elegant Blue Danube.   Heywood Floyd travels to the moon to examine a monolith uncovered 40 feet beneath the surface, buried 4 million years previous.  This is clear evidence of alien life.  After Dr. Floyd touches it, a signal is sent to Jupiter, communicating to the aliens, and directing humanity to Jupiter to receive their next communication.

Journey to Jupiter
As we are introduced to the crew members, we notice that one of humanity’s tools, HAL 9000 is treated as an equal member of humanity.  HAL is uncomfortably human and the pilots are uncomfortably sub-human, with each of them meeting in the center of a humanity shaped by tools and tools becoming more human.  HAL is infinitely smarter than any single human, with greater logic and able to run the ship to such a degree that the pilots are dependent on him. 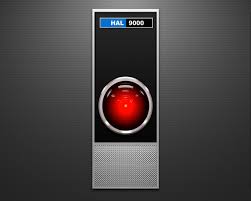 HAL, while on the trip, comprehends the true purpose of the mission, that aliens will confer on humanity the next evolutionary step.  HAL, perhaps considering humanity inferior to their tools, plots to kill the humans and to take the step himself.  HAL kills off Frank and the rest of the crew in stasis, and then isolates Dave Bowman in space.  Dave, using the mechanical system on the ship, not connected to HAL, is able to enter the ship at great risk. Although HAL has greater logic than any human, he underestimates human determination to survive, even to take on a huge risk.  Dave takes HAL’s chips out, causing him to regress to his birth.   This is the final war of humanity, the battle of whether humanity or their tools will take the next evolutionary step.

Jupiter and Infinity
David Bowman leaves his ship behind, travels to a monolith, just beyond a moon of Jupiter.  He travels through a wormhole, into a room in which he quickly lives out the rest of his life.  At the moment of his death, he reaches out to a monolith, which transforms him into the Star Child, the mediator between humanity and the aliens, the dominating force of our solar system.

The pace is slower than any other Kubrick film, except perhaps The Shining, but why is this necessary?  It only offers to confuse and bore the audience.  I think it has to do with that the film is supposed to focus on visual spectacle, minimizing narrative—a huge picture book for the novel, or the visual outline the written novel is supposed to explain.  The slowest aspects of the film are dull to our modern eyes, but we could understand that Kubrick wanted to showcase the models of the complicated spaceships and the camera tricks that display weightlessness.  While these visual effects are commonplace today, they are unique pieces of art that Kubrick thought would keep the audience’s attention.

This film is very much caught in its timeframe, reminding us again and again that it is a film of the 60’s, with a 60’s vision of the future, as all visions of the future are ultimately reflections of their own time.  While the male doctors are given the title “Doctor” the female doctors are called “ladies”, and servants are all women.   The fashion is just a step beyond the time-restricted 60’s fashion, whether furniture or clothing.  The final “mind blowing” acid trip of a wormhole is little more than dye on glass, color filters and colored pen on film , and weak compared to some of the spectacle we have seen in more recent years.  As forward-thinking as the film is, it remains an obviously 60’s vision, which takes away the timelessness of most great films.

The greatest restriction of the film is the fact that it has influenced so many films after it, from Solaris to Star Wars to Tree of Life to Gravity.  There is little in the film we haven’t seen before.  Yet it is still an amazing film, worth seeing in all its 70mm glory.  The ideas might be overused by others, but its greatness shouldn’t be lost on audiences for all time.