In 1987 I was in college and we studied hard.  A local three-dollar theatre was available and we were always looking for cheap entertainment.  A friend of my friends had seen The Princess Bride in its first run, and asked… no, actually, she demanded… that we go with her to see it.  We loved it.  It provided the perfect break from our everyday lives.  Pretty soon, we were seeing the film every week during its run at the theatre, which was a number of months.

At this point, I am a died-in-the-wool fanatic about the film.  It is a family favorite, along with a handful of Miyazaki and Monty Python and the Holy Grail.  Why do we love this film?  Let me count the ways…

1. The Two Frames
There are two versions of The Princess Bride—the movie and the 1973 novel written by the screenwriter, William Goldman. In the movie, a grandfather reads the old fashioned adventure story to his increasingly convinced grandson.  In the novel, we have a different frame.   To read the novel takes nothing away from the movie, but adds so much.  Primarily is the story of how the author of the “original” Princess Bride is S. Morgenstern who was writing a long satiric tome rejecting royalty.  Goldman’s father so loved the book he would read it to his son, but skip all the boring parts and spruce things up a bit.  Goldman sought this book for years and finally found it to read to his son, only to find it was a dusty, dull historic story.  So he rewrote the story in the way his father told it: the “good parts” version.   This story is as fictitious as the rest of the novel, but adds so much to the overall story. 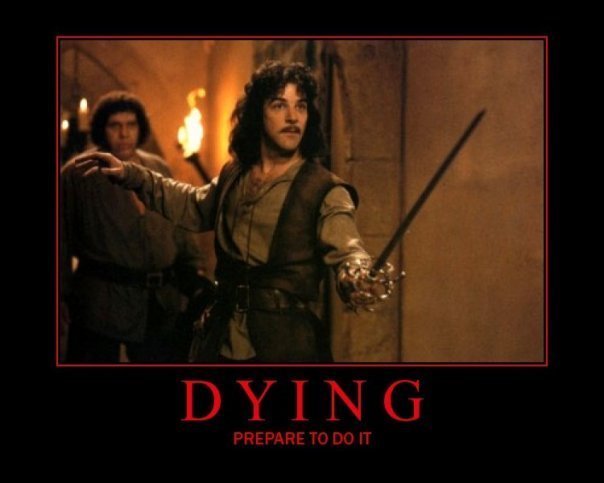 2. Sincerity of the characters
No matter how silly the story gets or the names, or the dialogue, almost every character isn’t playing as if they were in a comedy, in which they are winking at the audience.  They are serious, at times deadly serious.  It is an old-fashioned, classic movies seriousness, a Douglas Fairbanks seriousness, but it is beautiful for that.  The comedy is deepened by the sincerity of every line.  But this just goes to prove that the film isn’t just comedy.  We are truly impressed by the honor of the Dread Pirate Roberts as he dispatches but does not kill Inigo or Fezzik.   We are furious at the hypocrisy of Prince Humperdink and feel a chill at the quiet sadism of the Count.  Not only is this one of the greatest comedies, but also one of the great adventure stories ever.

3. Great names
William Goldman pulled out all the stops, becoming one of the great namers next to Dickens, Rowling and Terry Pratchett.  The Cliffs of Insanity makes us wonder why people go insane at these cliffs.  Are they so tall that looking to their top causes an aneurysm?  Humperdink  sounds vaguely nasty, almost as if Miracle Max had named him.  The Machine is chillingly vague, as if once you have experienced this machine, there really is no other machine you would ever think of.  Buttercup is so over-the-top silly that every time I hear the phrase “Princess Buttercup” I smile and have images of Saturday Morning Cartoons made to sell another cereal.  ROUS, Fire Swamp, Dread Pirate Roberts—all classic names. 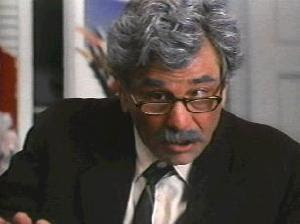 4. Peter Falk
One of the great comedy/drama character actors of all time.  He is usually undersung, because after Colombo it was hard for anyone to take him seriously.   But he is so memorable in so many films: Wings of Desire, A Woman Under the Influence are two of many amazing performances.  He makes it look so easy, as if anyone could be slyly sincere, and underhandedly benevolent.  Not anyone can.  And no one could like Peter Falk.

5. Wallace Shaun
Wallace Shaun is another undersung performer and writer.  His day job is writer, especially small plays.  But he has some excellent roles as an actor, especially in My Dinner with Andre and as Rex the Dinosaur in the Toy Story films.  But I will always remember him as the proud Vizzini, self-confident to a fault, always proclaiming “inconceivable.” 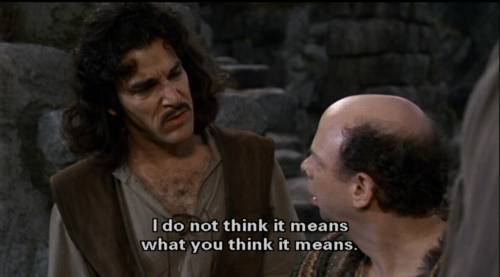 6. Excellent quotes:
“There’s not much money in the revenge business.”
“Tyrone, you know how I love to watch you work, but I’ve got my nation’s 500th anniversary to plan, my wedding to arrange, my wife to murder and Guilder to frame for it.  I’m swamped.”
“Life is pain, Highness.  Anyone who tells you differently is selling something.”
“Anybody got a peanut?”
And we cannot forget the classic quote: “Hello.  My name is Inigo Montoya.  You killed my father. Prepare to die.”
That’s just a sampler.  I could fill this page with quotes.  And I will, if given half a chance.  Post your own favorite quotes in the comments, if you like.

7. Beautifully silly ideas
Goldman has created a number of concepts that enrichen the movie with comic gold:
“Mostly dead”—A person can be dead, but not really dead and then revived by forcing a large chocolate-covered pill down his throat.
“True love”—There is your regular, every-day love, but once in a while there is “true love” which cannot be broken by governments, kidnappings or even death.  And it results in remarkably effective kisses.
Brawn + sword  + brains= Unassailable plan.  Unless someone has greater brawn, sword technique and smarts.
Iocaine powder—Odorless, tasteless, mixes well in liquid and kills instantly.  Yet a great tracker like Humperdink can sense it immediately.

8. Andre the Giant
Andre first gained his fame by being a villain in opposition to Hulk Hogan in wrestling.  I never saw any of these bouts, but I find it hard to believe that he could be seen as a villain.  He was the gentlest, most wonderful people in the world.  Billy Crystal, after meeting him on the set of The Princess Bride, was inspired to make the film My Giant, in an attempt to show Andre’s real character.  Andre was famous for wanting to pay for a meal whether he was the host or guest.  At one point Arnold Schwartzanager snuck away to pay the bill ahead of him.  Andre caught wind of what he was doing, and he and Wilt Chambrilen picked Arnold up and deposited him at his car. (Can you imagine serving these three giants? Is there a restaurant that could hold them all?)  In this movie the role of Fezzik Goldman writes of Andres real nature, strong but gentle.  He died of heart failure in 1993.

9. A movie for all ages
The Princess Bride stands alongside of many Pixar films as being a true “family” film, good for both children and adults.  And it grows with one as well, even as the Wizard of Oz does.  As a child we might appreciate some of the humor and the adventure, but as we get older more and more of the humor hits home, as well as the abiding nobility.

10. A movie for all eras
Although the frame is clearly placed in the 80s as the opening scene of the old-time baseball video game shows.  But really, this film is timeless.  The majority of the story takes place in a vaguely 18th century European fairy tale world, which could really be anytime, anywhere.  And the themes of the relationship between the grandfather and his grandson, romantic love, desire to right wrongs, and a sense of fairness never changes.

In the end, The Princess Bride is a film for all ages, for all people.  Not everyone will appreciate the humor, for all such appreciation is subjective.  But there will never be a time in which a group of people won’t appreciate The Princess Bride, as it is one of the classic entertainments of cinema.