Sanjuro and the Man With No Name Many people know that A Fistful of Dollars was a remake of Kurosawa's Yojimbo.  The plot goes pretty much scene for scene from the original, although Eastwood plays a slightly different hero than does Mifune. For a Few Dollars More may have borrowed some elements from the Japanese sequel, Sanjuro, but it is quite different.  For a Few Dollars more takes the character of the Man with No Name in a certain direction-- he has a sense of humor, but Eastwood is certainly for sale. By the time that trilogy ends, his morality is determined by the Almighty Dollar.

In Sanjuro, the character becomes more moral, taking on the cause of the underdog, even offering to sacrifice himself and proves himself wise in the arena of politics with a military twist. As per usual, the Man with No Name (who names himself "30-year Camellia" on a lark) arrives in a town split by violent factions. In this case, one faction is behind truth and justice and the other is not. As usual, our anti-hero gets involved, and his methods are... unusual. At the very least, unexpected. The "good" faction are often fighting about whether to listen to the man. 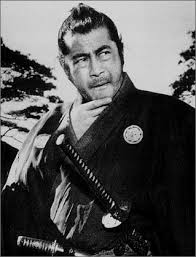 What is most unique in this film is the insertion of a female, even gentle, point of view. Recognizing Mifune as a "glinting sword" an older woman recommends that he would be better off as "a sword in a sheath." We find our anti hero questioning himself, even making errors, because of his excessive violence and self-assurance.

I love Mifune's take of this character, at one point lazy, another yelling, another deeply considering as he rubs his face.  So full of life and joy.  I am really beginning to appreciate the appearances of Tatsuya Nakadai, here as Mifune's counterpart on the corrupt side of the equation.  This is the one place where I can see a similarity between Sanjuro and For a Few Dollars More-- in the uncomfortable camaraderie of equals.  That aspect truly enriches both films, although it is minor in Sanjuro.

One of the fascinating aspects of Sanjuro, which is also played with in Harakiri, is the facade of dishonor, even betrayal, for the sake of loyalty and honor.  The nine young samurai are often discussing whether Mifune is simply unorthodox in his approach to nobility, or is actually ignoble. This aspect makes this film more true to real life, for there are many people in which the appearance of disloyalty is the same as disloyalty, as if a criticism of a nation is equal to a lack of patriotism.  "The proof is in the pudding", so to speak.

Although out of the whole series, I find For a Few Dollars More the more entertaining ride, I find Sanjuro to be both funny and introspective, both filled with action and a call to gentleness. If Tarantino would ever get off of his revenge kick, I'd love to see him do a remake of this classic film.

For the record, I consider The Good, the Bad and the Ugly the worst of the five films. I dislike the depths of selfishness the Eastwood character goes to and the development of that character as a money-grubbing criminal.  Obviously I don't have a problem with immoral characters (see my review of Sword of Doom), but I find that the Man With No Name isn't very smart in this last film.  Sigh.  Oh well.
Posted by Steve Kimes at 12:54 PM